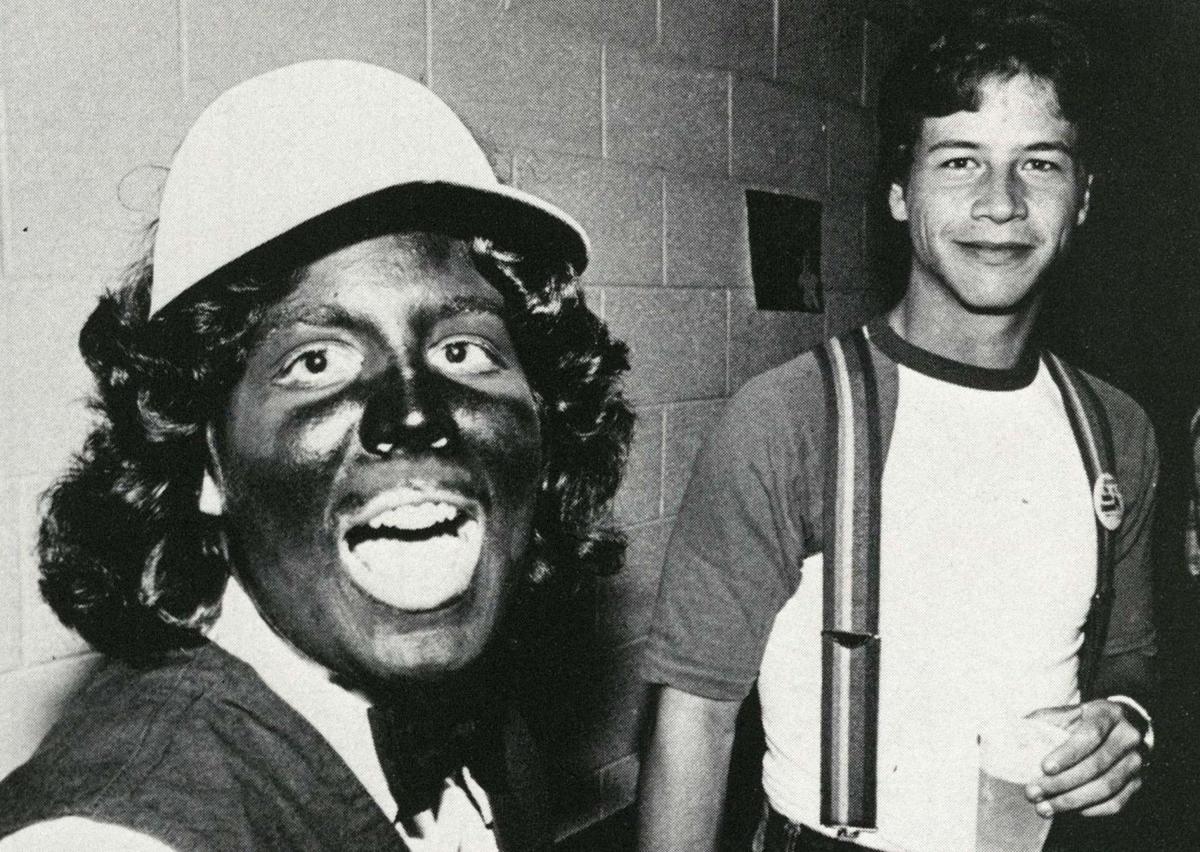 Mulrooney said blackface was popular and used as a way to raise money for JMU student organizations. 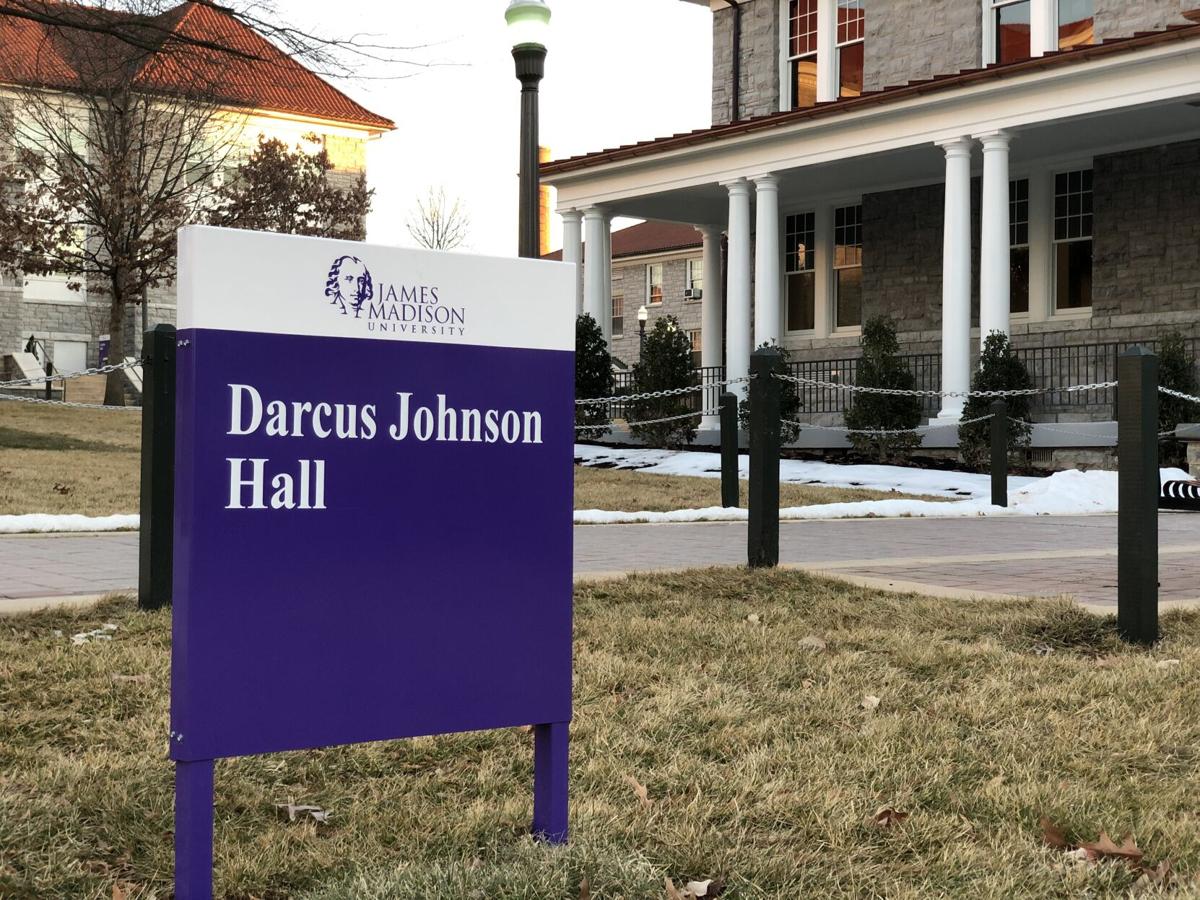 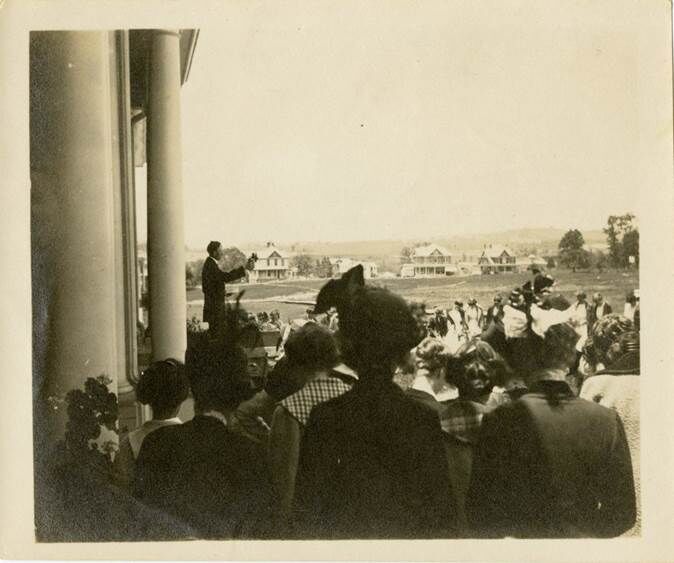 Each year, John Wayland took students to where Ashby fell in 1862.

It’s 1908 — JMU was established, and its doors opened to white females a year later. According to history professor Dr. Margaret Mulrooney, early documents promoted Harrisonburg as a rural white community to attract incoming students, as families were concerned about where they were sending their daughters to. It’s also the height of Jim Crow in the U.S. and in Virginia, a Southern state.

“Are there ways in which that history perhaps inadvertently still shapes the campus today?” Mulrooney asked. “So, it is a diversity and an access and inclusion question.”

Jim Crow, blackface and the height of racism

The official alma mater of JMU was called “Bluestone Hill,” reflecting the campus’ nickname. But, Mulrooney said there was an unofficial song that plays the role the “Fight Song” does today.

The song “Shendo Land,” sung to the tune of “Dixie,” was a minstrel song that was sung in racist dialect. Mulrooney said at JMU’s first commencement ceremony, the students sang both the official alma mater and “Shendo Land,” with the lyrics for both written in the program. Some of its lyrics included: “Oh, I wish I was at de school in Shendo/ Good times dar don’t seem to end, so/ look away, look away, look away, Shendo Land.”

“Right from the beginning, there are all the ways in which the culture on campus is reflecting the broader culture,” Mulrooney said. “There are still some people who are kind of surprised that this is a thing, because we’ve erased it from our cultural memory.”

Mulrooney said in the early 20th century, blackface was popular and used as a way to raise money for JMU student organizations. The Lee Literary Society — named after the Confederate General Robert E. Lee — sponsored readings, talks and musical events through minstrelsy.

Dr. John Wayland — for whom Wayland Hall is named — was the primary faculty member responsible for history curriculum at the time. Mulrooney said the curriculum was racist, celebrated the Confederacy and the Lost Cause narrative, which frames Southerners as noble people defending their cause continuing slavery. Wayland was also in charge of the Excursion Committee, field trips that took students to historic sites in and around campus, such as the Turner Ashby monument that still stands behind Sentara Field.

Mulrooney said in 1917, Wayland proposed the names for JMU Confederate-named buildings, such as Ashby Hall, Maury Hall and Jackson Hall. She said the buildings on the Quad work together like a lesson plan — for students to remember who Ashby was, who Jackson was and more — and therefore, commemorate the contribution these men made to the Confederacy and Virginia history.

The task force Mulrooney was on had held several campus dialogues and formal opportunities for students to learn about JMU’s history. Through this, she’s found that even history majors who’d spent years in Jackson Hall aren’t always familiar with what the names mean.

Norman Jones, the student board of visitors representative, said he was in the same boat, surprised at who the names represented.

“For me, it’s a weird reminder that as great as my time at JMU has been — and it’s really been phenomenal — it’s still not ideal,” Jones said. “You walk across the picturesque Quad and all of these buildings are named after racist people, people who [would] fiercely oppose you being on this campus right now.”

In fall 2019, the JMU campus community had the same debates that were happening all over the country, which posed the question: Is it appropriate for a public, diverse campus to have buildings named for Confederate officials?

Mulrooney said there were people who thought the names should change, and others who believed they were a part of the institution’s history. Others wondered if the buildings can keep the names, but put signs up, acknowledging that the university doesn’t hold racist values.

“It’s an important question, because when you name a building for a person, you are celebrating, as I said, and commemorating something about that individual,” Mulrooney said.

But, right now, there’s no answer. Mulrooney said the first step is to make people aware of the situation before making a decision. The community also must be aware of other buildings on campus. Wilson Hall was named after Woodrow Wilson, who oversaw segregation in federal offices and removed civil-rights leader William Monroe Trotter out of the Oval Office.

It’s more than the three buildings on the Quad.

Jones said if the campus strives to expand diversity and promote an inclusive community, having the name of a person who actively oppressed one and their history isn’t generating the right message.

“Thankfully, Black students at JMU have found a way to persevere and work to make new changes that try to uplift in different ways,” Jones said. “We find a way to make something out of nothing.”

Black history and integration at JMU

Jones is a JMU legacy — both his parents attended JMU. He said he’s heard a number of stories about Black history at JMU and how the students and faculty dealt with integration.

He said from what he’s heard and experienced during his time at JMU, the Black community has been “tight-knit and connected” since they made up a small percentage of the university in the ’60s, ’70s and ’80s.

And, for a long time, the Black community would be the only faces of diversity for JMU and other universities. This resulted in greater efforts from the university to bring in Black students, and Jones said Dr. Ronald Carrier made a huge effort to expand diversity in the ’80s and ’90s by supporting institutions striving to promote diversity on campus.

“You can ask pretty much any Black student, Black alumni from JMU from 1972 up to 1996, and they’d tell you that the way that JMU made an incredible effort to personally reach out and support Black students,” Jones said.

But Jones said he couldn’t imagine the beginnings of integrating Black students and faculty being easy regarding racial injustices. Hearing experiences from different members of Black faculty, Jones said people were once able to count the number of Black people on campus.

Because of this, Black staff and students had to cultivate their own group. He said his parents attended protests during their days as students and heard that some students had to fight for having Martin Luther King Jr. Day off.

“It’s really inspiring,” Jones said. “When I first started hearing about the bigger, broader picture of Black history at JMU from my parents, that’s when I had a new appreciation for this university.”

In October 2019, a new residence hall opened named after Paul Jennings, a man enslaved by James Madison. Jones said this was the first step toward acknowledging that the namesake of the university wasn’t a perfect person.

Jennings earned his freedom after Madison died, worked in the Pension Office, raised a family and purchased a home in Washington. For Jones, naming the new hall after Jennings shows that JMU is moving forward.

“This is why Paul Jennings Hall is a testament to the imperfections … the racism of James Madison,” Jones said. “Acknowledging that, saying we’re trying to right this wrong is also a way, I think, for JMU to say we are also trying to right our wrongs as a university.”

Jones said instead of pushing aside Black figures and Black history, this is one way to present a message of diversity, even if JMU’s student population and past cultures don’t reflect it.

“If it comes with a new building that pays homage to an incredible man with an incredible story, that’s just the first step forward,” Jones said.

The experience for a student of color is different than what it was in the late ’60s and the early ’70s when integration first began. But, Mulrooney said she and others still don’t know what students knew about the Confederate-named buildings. Every semester prior to the name changes, there’d be people who walked across the Quad not knowing who their academic buildings were named for and what they meant.

The conversation hadn’t ended there.

On June 7, 2020, the JMU Board of Visitors approved the removal of the three Confederate-named buildings on the Quad: Jackson, Ashby and Maury. The signs in front of each building were taken down and replaced with temporary names.

This decision was made after Mulrooney and JMU’s History and Context Committee provided background on who the buildings were named for. The committee also put out a survey to gather input and feedback. According to Nick Langridge, the vice president for university advancement, President Jon Alger also recommended to the Board of Visitors that the names be removed.

Mulrooney said the decision to remove the names of the three Confederate officers’ names from buildings was important because the university is recognizing that the buildings symbolize racism and oppression.

“Removing those names, was a really important and symbolic step forward, a way to start saying, you know, we have to acknowledge the actual history of the institution,” Mulrooney said. “But, it’s bigger than just that. So, we’re continuing to think about the way in which the institution can acknowledge the harm that had been done.”

Langridge said that there were two major responses from the community: those who felt that the university took too long to remove the names, and those who believed that the renaming was too sudden.

“Thinking about the future naming these buildings, we want to represent people and ideals that are representative of our community and are welcoming to our students,” Langridge said.

In December 2019, the History and Context Committee recommended a Campus History Committee, which will make efforts to acknowledge and critically examine JMU’s institutional ties to “slavery, segregation, racism and discrimination.”

Then in February 2020, Mulrooney said the Campus History Committee recommended the institution to review the way it describes its history in admission tours, especially considering the way it portrayed early women students.

“Why are we constantly representing the women who attended Madison College as being focused on getting married?” Mulrooney said. “What is the whole thing about kissing rocks we were trying to communicate with that story? You know, we’ve got some gender problems here as well.”

This spring, the Board of Visitors approved new names for three buildings on the Quad after prominent Black members of the JMU community. These names would be more consonant with JMU’s contemporary values and would acknowledge the contributions of Black people particularly.

Joanne and Alexander Gabbin, Sheary Darcus Johnson, Doris Harper Allen and Robert Walker Lee were chosen after recommendations were made by senior leadership in collaboration with the Campus History Committee. The Gabbins were recognized as outstanding faculty members at JMU for more than 25 years. Johnson, who graduated in 1970, was JMU’s first Black student and graduate. Allen and Lee are “unsung heroes” in dining services and maintenance, respectively.

“Those of us who are working on campus history, we all recognize that the names of buildings are powerful symbols, but they’re not the end result,” Mulrooney said. “The name of a building is a symbolic act; it’s not actual history. Actual history is what the work of the committee is about.”