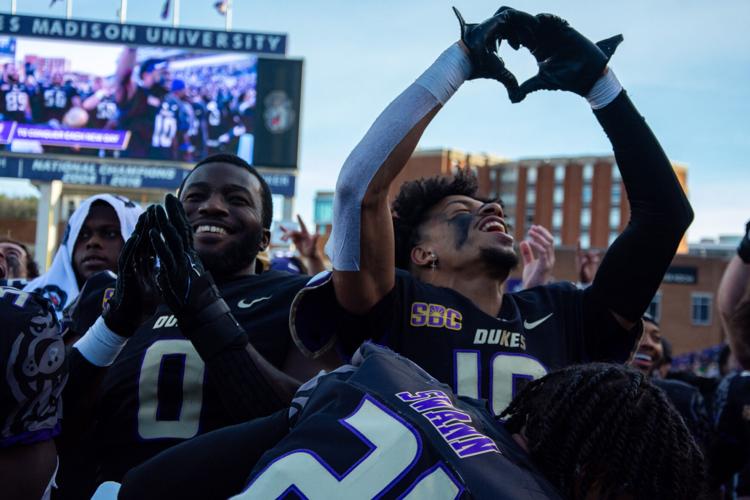 JMU redshirt senior wide receiver Devin Ravenel holds up a heart to the Dukes' fans, and redshirt senior defensive end Isaac Ukwu claps in celebration after JMU's 47-7 season-culminating thrashing of Coastal Carolina on Nov. 26. The Dukes' season is over at 8-3 (6-2 Sun Belt) because they're ineligible for a bowl game or Sun Belt Conference championship opportunity. 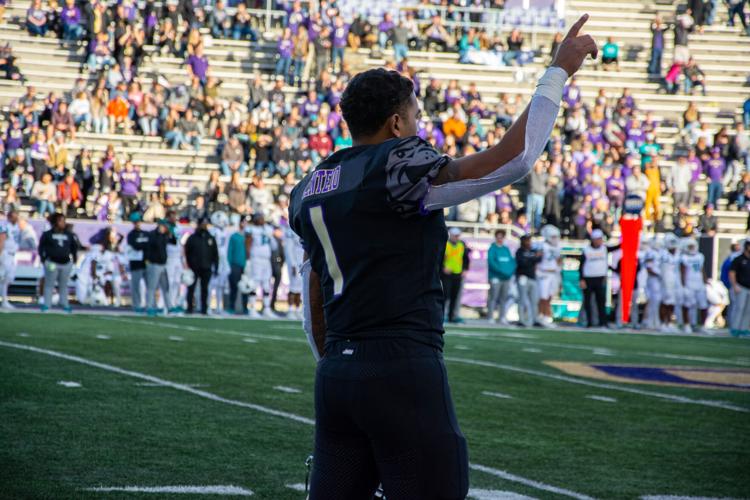 JMU graduate transfer quarterback Todd Centeio points toward the crowd near the end of Saturday's game versus Coastal Carolina — Centeio's final game as a Duke. In the 47-7 win, Centeio accounted for five total touchdowns and 312 total yards of offense.

JMU redshirt senior wide receiver Devin Ravenel holds up a heart to the Dukes' fans, and redshirt senior defensive end Isaac Ukwu claps in celebration after JMU's 47-7 season-culminating thrashing of Coastal Carolina on Nov. 26. The Dukes' season is over at 8-3 (6-2 Sun Belt) because they're ineligible for a bowl game or Sun Belt Conference championship opportunity.

JMU graduate transfer quarterback Todd Centeio points toward the crowd near the end of Saturday's game versus Coastal Carolina — Centeio's final game as a Duke. In the 47-7 win, Centeio accounted for five total touchdowns and 312 total yards of offense.

The world rotated around the sun like usual yesterday, but inside Bridgeforth Stadium, something felt out of the norm.

Inside that stadium Saturday, JMU obliterated No. 23 Coastal Carolina, 47-7. The teams are the top two in the Sun Belt Conference East Division and, after the result, finished the season with the same conference record: 6-2.

But even with the loss, the Chanticleers will still represent the east in the conference title game Dec. 3 versus the west’s Troy.

Coastal Carolina actually locked itself into the title game before it faced the Dukes. Because JMU played in the Football Championship Subdivision (FCS) up until last year, and now that the university is playing a higher division of football, the Dukes aren’t allowed to compete for a bowl game right away because of NCAA rules. And because the Sun Belt doesn’t want its conference champion to be bowl-ineligible, JMU wouldn’t be allowed to play past Saturday’s game, even if it won by 100 points.

As for the Dukes, they don’t — at least not outwardly.

“This is the perfect ending,” graduate running back Percy Agyei-Obese said following the win versus Coastal Carolina. “I'm just happy to be a part of it.”

JMU knew this season had a finite Nov. 26 end before it began. Only once did JMU head coach Curt Cignetti speak critically of the FBS transition rule, when Oct. 3 he called it “antiquated” and that “the people that suffer are the student-athletes.” On Oct. 10 after JMU’s 5-0 start, Director of Athletics Jeff Bourne said he was “fighting for” football’s student-athletes to get a postseason opportunity.

Postgame Saturday, redshirt senior wide receiver Kris Thornton said JMU should be going to a bowl game, but other than that, players mostly reminisced on this year’s historic season — for good reason. JMU exceeded pretty much all outside expectations this year, finishing 8-3 (6-2 Sun Belt) as the first transitioning team to ever face a full FBS schedule in its first FBS season.

“The way they were making it seem as, like, you're gonna come into this level and just be outmanned and pushed around,” JMU redshirt senior defensive end Isaac Ukwu said, “we weren't going for that.”

Back in late July, Sun Belt coaches picked JMU to finish sixth of seven teams in the east division. Four months later, the Dukes declared themselves “Kings of the East.”

“They disrespected us in the beginning but I mean, obviously they didn't know what JMU was capable of coming from the FCS. They thought it was gonna be sweet,” Ukwu said. “We knew it, like, I knew JMU would be good moving up, but it's definitely coming on way faster than a lot of people thought.”

While the survey respondents had low expectations, people in the college football world weren’t too taken aback by JMU’s record this season, with some citing the Dukes’ success in the FCS. Appalachian State and Coastal Carolina head coaches Shawn Clark and Jamey Chadwell, respectively, said Nov. 14 they weren’t surprised to see JMU hit six wins in its first FBS season. Agyei-Obese said before the Coastal Caroliina game that this season hasn’t been as difficult as he thought it’d be. And Cignetti, armed with 28 years of Power 5 assistant coaching experience, said he’s “not a bit surprised” about JMU’s output this season.

Yes, postseason ineligibility keeps the graduating seniors from punctuating this inaugural FBS season. It affects the younger players, too — bowl game preparation in December would give them about 20 extra days of practice that they won’t get without a bowl game.

JMU could’ve played with lackluster effort Saturday and pouted postgame about the season’s end. Instead, the Dukes treated Saturday like their bowl game, Cignetti said, and beat down on the team that’ll go to the title game next week.

The Dukes ended 2022 in the best way they could, given the circumstances, while controlling what they could Saturday: Playing dominant football.

“Everybody knows who JMU is now,” Thornton said, “and they can’t deny it.”

JMU football took down Coastal Carolina 47-7 in the final game of the season. Sports Editor Madison Hricik breaks down what the win meant to the Dukes on Senior Day.

JMU defeated South Dakota State 79-60 on Saturday to begin a two-game slate the Dukes are facing in the Hostilo Community Classic this weekend. JMU plays the back end of the two matchups Sunday at noon versus Valparaiso, looking to move to 7-1.

JMU squeaked by Liberty 67-63 Wednesday afternoon in a game that came down to the final minute. The Dukes next play Dec. 1 on the road at VCU, looking to get to 5-2.

Chasing perfection: A long snapper’s quest from a summer camp to JMU and beyond

JMU sixth-year, graduate long snapper Kyle Davis is wrapping up his last year as a Duke after starting in purple and gold for four years and serving as "the glue," as former JMU punter Harry O'Kelly (2017-21) called it, of the Dukes' special teams unit for multiple seasons. Sports Editor Grant Johnson recounts Davis' football life to this point, which spans from an impromptu long snapping football camp in middle school and gaining respect at JMU to vying for an NFL job after this season.

JMU capped off its time in Savannah, Gerogia, this weekend with an 81-79 overtime loss to Valparaiso (3-4). The Dukes, now 6-2, turn their attention back home to face Eastern Kentucky on Friday before a clash with No. 5 U.Va. on Dec. 6.

After JMU's 47-7 win over Coastal Carolina last week, a celebration ensued in which the Dukes celebrated with a "Kings of the East" sign. Staff writer Jackson Hephner analyzes how the Sun Belt nor the Chanticleers have acknowledged JMU's self-proclaimed moniker.

Even though JMU is 8-3 and played a full FBS schedule this past fall, it can't participate in a bowl game because of rules barring FCS-transitioning teams from competing in one right away. Sports Editor Grant Johnson pooled athletic directors and commissioners from across the country to see if the transition rule is fair or should go to the wayside amid a dynamically changing time within college athletics.

Should JMU be bowl bound? Part II: Prior transition case studies, and the fight for exceptions

JMU football isn't the first FBS-transitioning team to reach the requisite number of wins needed for bowl eligibility within its reclassification window. In Part II of his bowl ineligibility series Sports Editor Grant Johnson looks into previous successful FBS and division reclassifications, and if exceptions to the rule are more or less likely in today's climate of college football.