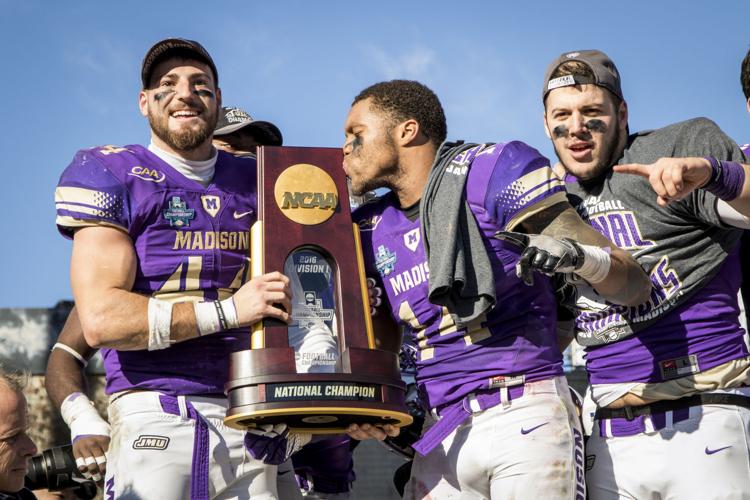 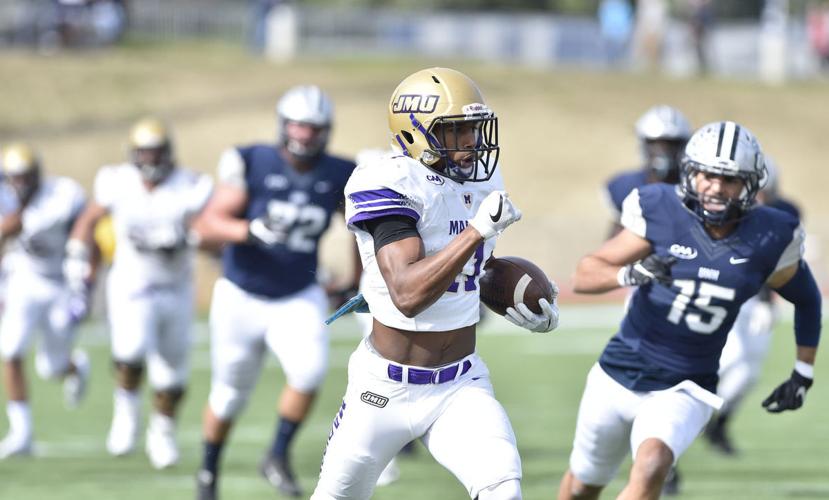 Brandon Ravenel streaks down the field against UNH. 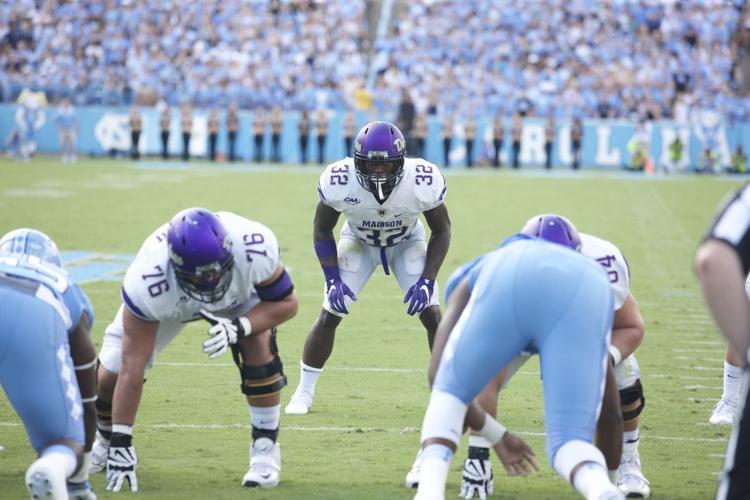 Khalid Abdullah gets ready to take a carry vs. UNC. 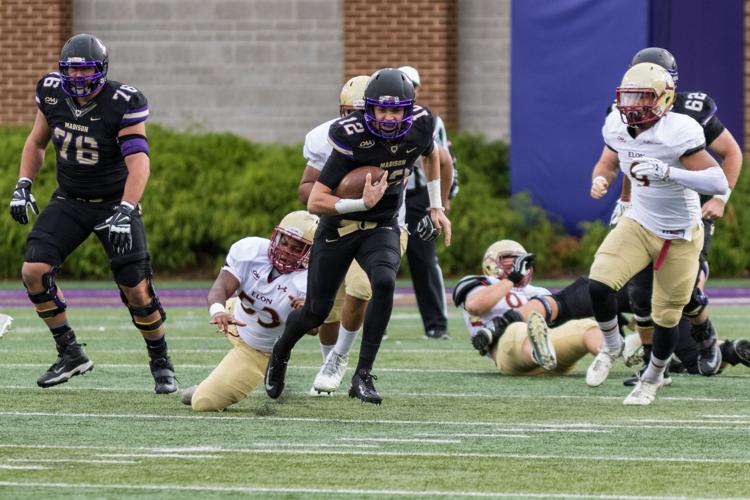 Freshman quarterback Cole Johnson runs through the middle of the field against Elon. Johnson won CAA Rookie of the Week for his play against the Phoenix. 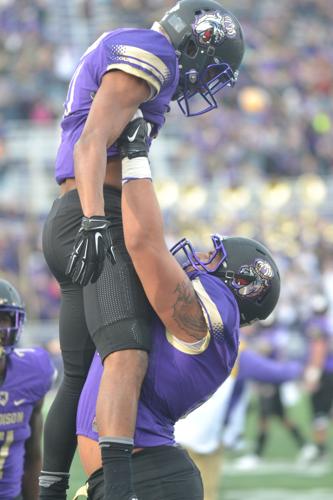 Brandon Ravenel gets lifted up by teammate Aaron Stinnie after Ravenel scored a touchdown. 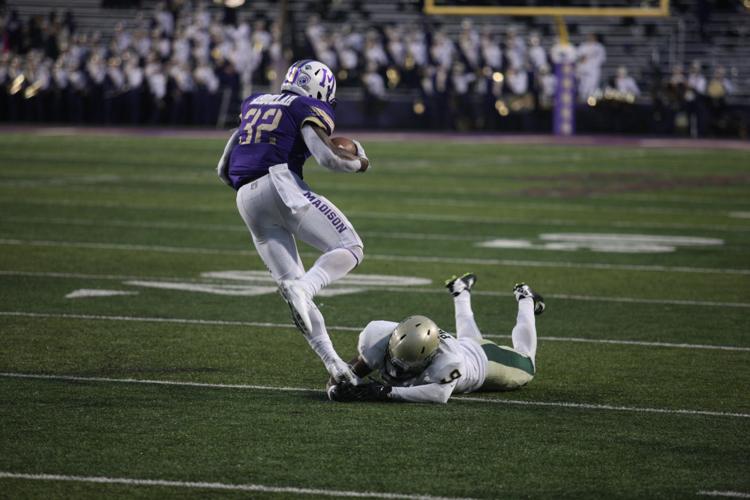 Senior running back Khalid Abdullah sends a William & Mary defender to the turf with a juke on his 74-yard touchdown run. 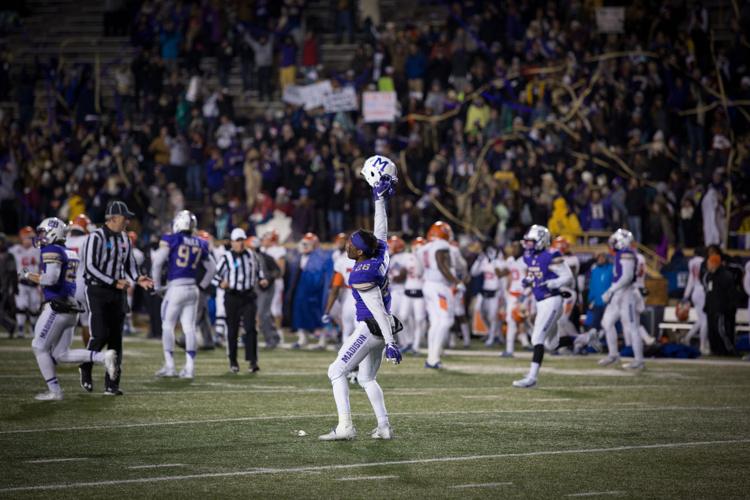 Sophomore cornerback Curtis Oliver celebrates by holding his helmet in the air as the Dukes beat Sam Houston State 65-7. 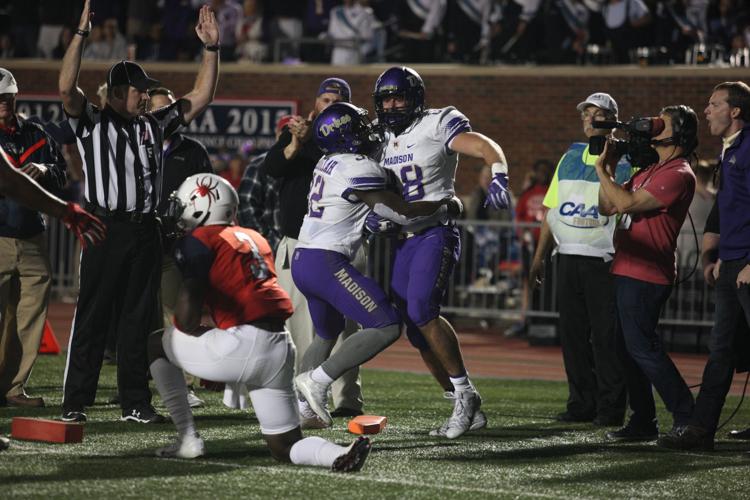 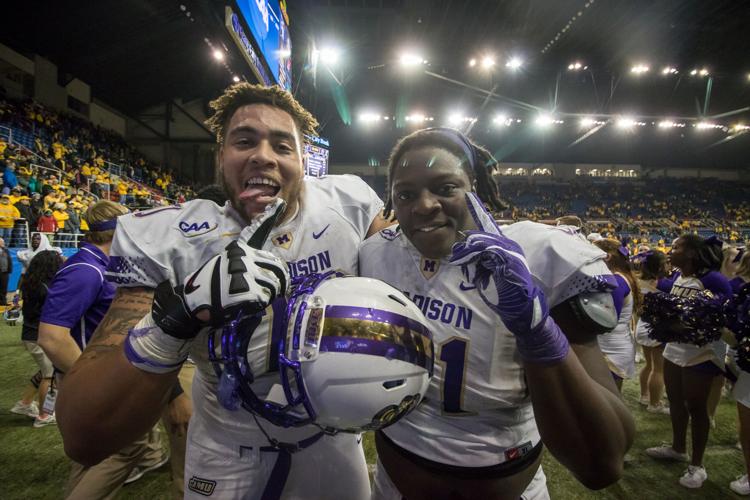 Redshirt junior offensive lineman and redshirt senior defensive lineman Martez Stone signal that the Dukes are No. 1 after they knocked off the Bison. 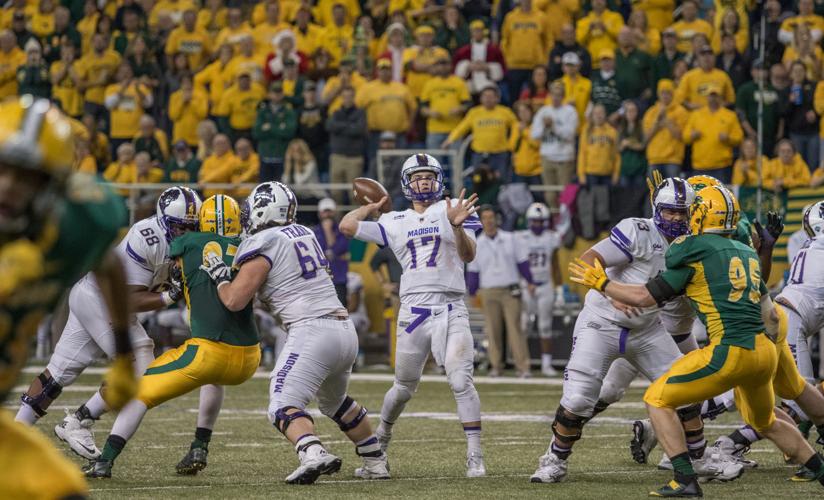 Junior quarterback Bryan Schor throws a ball down the field in JMU's win over the Bison. 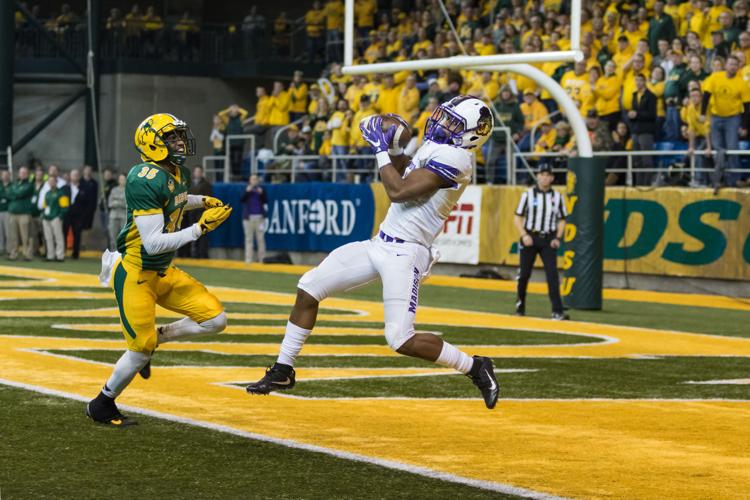 Junior wide receiver John Miller hauls in a touchdown pass from Schor on third-and-10 to put the Dukes up 27-17 over North Dakota State. 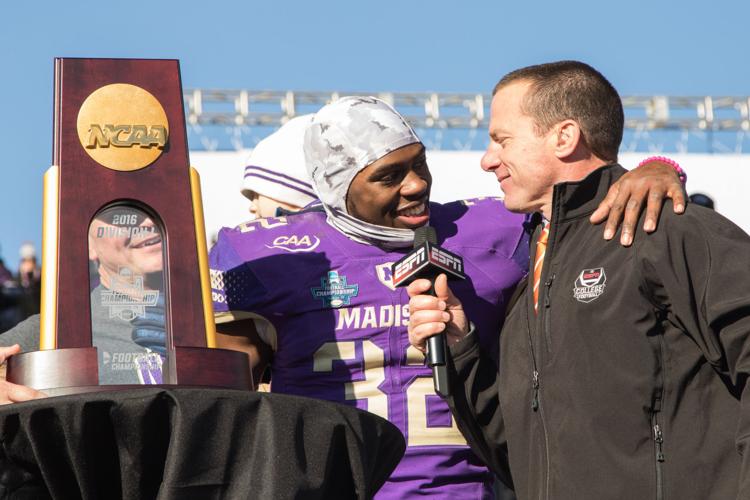 Brandon Ravenel gets lifted up by teammate Aaron Stinnie after Ravenel scored a touchdown.

Saturday marked 70 days until JMU football’s season opener at East Carolina. With just 10 weeks until the start of the regular season, we rank the top 10 moments from the Dukes’ 2017 championship season.

On Oct. 15, JMU stormed out to a 42-12 lead over UNH after three quarters. The Dukes could do no wrong as they played well in all three phases of the game. Fast forward to the waning minutes of the fourth quarter, however, and it took wide receiver Domo Taylor pouncing on an onside kick for the Dukes squeak out a 42-39 win. This gave the Dukes the ball and halted a remarkable comeback by the Wildcats.

The victory moved the Dukes to 6-1 on the season, and the disappointing fourth quarter fueled them through the rest of the regular season.

9. Leading UNC after one quarter

North Carolina beat JMU 56-28 when the Dukes traveled to Chapel Hill, but through one quarter the underdogs put a scare into the Tar Heels.

Running back Cardon Johnson ran a wheel route on third down late in the quarter and Bryan Schor found the redshirt junior streaking down the sideline. Johnson snagged the pass and outran everyone on his way to the end zone. A stunned crowd watched on as the Dukes took a 21-14 lead over Mitchell Trubisky and the Tar Heels. Trubisky, the No. 2 pick in the NFL Draft, went on to throw for over 400 yards in the game, but the Dukes stood toe-to-toe with the ACC foe for a quarter.

Schor’s collarbone injury against Villanova the week before gave the freshman quarterback a chance to shine on Senior Day against Elon. Johnson did just that en route to a phenomenal performance. He completed all but one pass in a 12-13 showing that included two touchdown passes and 274 yards.

The Phoenix were outmatched from the start, and Johnson’s individual play won’t be remembered for generations, but the game was a glimpse into JMU football’s future. Schor has one year left with the program before he’s expected to turn over the reigns to Johnson. If his performance against Elon was any indication, the offense will be in good hands.

In the Oct. 8 contest against the Blue Hens, Schor began to show JMU fans just how much he was capable of doing. The gunslinger threw for 209 yards and a touchdown, while also adding 103 rushing yards and three touchdowns.

His stat line was impressive, but it was nothing compared to when the CAA Offensive Player of the Year used his legs to avoid getting sacked and hit Terrence Alls with a deep pass. A year after replacing Vad Lee, Schor showed he had the athleticism to continue with the long line of dual threat JMU quarterbacks.

Davis played quarterback in high school, but with his size and speed, he was slotted into a role as a wide receiver. Davis had a chance to go back to his roots in JMU’s playoff game against New Hampshire.

The gates were locked as a lively crowd settled in for postseason football when Davis took a pitch from Schor, looked downfield and fired a perfect strike to Brandon Ravenel, who caught the bomb in stride and strutted into the end zone. The pass gave the Dukes a 17-7 lead en route to a 55-22 blowout.

JMU led its rival 24-17 with 1:08 left on the clock. The Dukes faced third-and-four and needed a first down to seal the game. Abdullah sealed the game and then some.

The senior took a pitch and raced by everyone for a 74-yard touchdown run that finished off the Tribe. JMU won the game by a final score of 31-24 as Abdullah ran for 194 yards and three touchdowns.

On a cold and dark night, the Dukes played a nearly perfect game en route to a 65-7 thrashing of the Bearkats. Sam Houston State entered the game with the nation’s top scoring offense, but it was shut down by the Dukes’ defense and only scored once in the contest.

Game-time temperature was 26 degrees, but the bone-chilling cold didn’t slow down the Dukes. They racked up 607 total yards and 42 first-half points as they cruised to the victory. While the Bearkats didn’t have their typical night offensively, punter Joseph Figenshaw did put up a season-high 386 yards on 9 punts.

A year after Richmond spoiled JMU’s homecoming game in which the Dukes hosted ESPN’s College GameDay, the Spiders got a taste of heartbreak in a thrilling 47-43 JMU victory.

Both teams played tremendously, with Richmond’s Kyle Lauletta throwing for an impressive 435 yards and five touchdowns. Despite Lauletta’s heroics, Schor found Kloosterman in the front left corner of the end zone for a nine-yard touchdown pass that put the Dukes up 40-37 with 1:36 remaining. Just 36 seconds later, Abdullah found paydirt from four yards out and the Dukes went on to win 47-43 a year after losing 59-49 in Bridgeforth.

JMU entered the FargoDome with the deck stacked against them. North Dakota State’s FCS home playoff record sat at 18-0. After a three-hour-and-10-minute heavyweight bout, the Bison’s record fell to 18-1.

Abdullah rushed for 180 yards and the team tallied 445 total yards in the Dukes’ historic 27-17 victory. After racing out to an 17-0 lead, JMU watched as the Bison stormed back to tie things up before Tyler Gray smacked a 45-yard field goal that will live in JMU lure. The kick sailed through the uprights and gave the Dukes a much needed emotional boost as well as a 20-17 lead with 11:46 left in the fourth quarter.

Miller looked down, saw his feet in the end zone and the North Dakota State faithful fell silent. The defense held tough, and the Dukes were headed to Frisco, Texas, with a shot at a national title.

Winning the second national championship in school history takes the top spot, but not for the game itself. The Dukes used strong defense, explosive special teams and consistent offense to win fairly comfortably by a final of 28-14 over Youngstown State. Even though the victory was special, it’s the moments after that hold the most meaning.

As the Dukes finished off the Penguins, a mass of purple flooded onto the Toyota Stadium field. Thousands of JMU fans in attendance worked their way toward their favorite players as confetti fell, and the stars talked to ESPN personalities on a makeshift stage.

Abdullah put his arms around Quint Kessenich as a wide grin painted his face following the final game of his career.

He had completed the journey from a freshman with potential to one of the nation’s top players and a national champion. 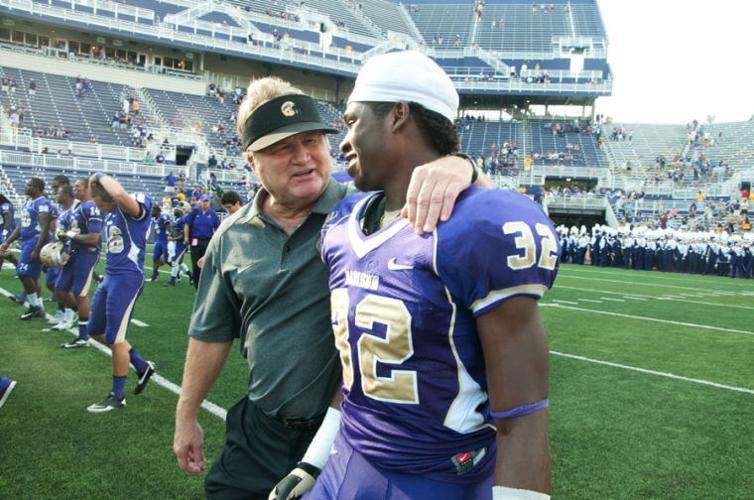 Freshman tailback Kahlid Abdullah walks to the locker room with coach Mickey Matthews after the Dukes 40-13 win over Albany Saturday. Abdullah scored his second career touchdown during the game.

As far as competition level and intrigue, the game against Youngstown State paled in comparison to the North Dakota State contest, but it didn’t matter. The journey for both the players and the fans was celebrated in those immediate moments after the game. Watching thousands of people unite over one team ranks as the best moment of JMU football’s 2016 season.

From covering the 2016 FCS National Championship to taking photos of a train derailment, Bennett has done a little bit of everything for The Breeze.