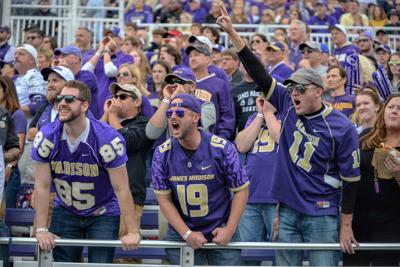 In the midst of CAA football, JMU travels to face a revamped William & Mary team playing its homecoming game. The Dukes have already taken down a team on its homecoming, defeating Stony Brook 45-38 in overtime.

This isn’t the same William & Mary team the Dukes have faced in recent years. The Tribe haven’t posted a winning season since 2015, which was also the last time they defeated JMU.

It’s clear the Tribe are trending in the right direction. Following former head coach Jimmye Laycock’s retirement, William & Mary hired Mike London. London — who won a national championship at Richmond in 2008 — made stops at Virginia and Maryland before returning to the FCS level. The former U. Va. head coach knows what it takes to bring a program to national prominence as he seeks to build a successful program.

“We see how special their entire defense is,” London said on the weekly CAA teleconference. “They do a great job with their coverage skills … What jumps out is their athleticism and their ability to challenge receivers. It’s a very good unit.”

Against Villanova, JMU’s secondary struggled against the deep ball. Luckily for the Dukes, William & Mary is last in the conference in pass offense, only averaging 178.2 yards.

While the stats may not favor London’s team, it has found success in previous homecoming games. The Tribe have won three of its last four homecoming games and took down then-No. 16 and eventual CAA champion Maine, 27-20 in 2018.

For the Tribe, the main question is the availability of freshman quarterback Hollis Mathis. Mathis sustained an injury against ECU and split time with senior Kilton Anderson against Albany but sat out against Villanova. London says his status against JMU remains in question, but he praised the Pittsburgh native’s toughness.

“He’s such a competitive young man,” London said. “I know he’ll be back and have an opportunity to get better from a football IQ standpoint … There’s no quit in this team, and now having the chance to play homecoming here for our fans will be exciting.”

JMU head coach Curt Cignetti knows this isn’t the same William & Mary team he’s faced in recent years. He stated his team would have to have a good week of practice before it enters a tough environment at Zable Stadium.

The past few weeks have been brutal for JMU. A tough travel schedule on top of playing multiple ranked teams will take a toll on any team. However, JMU’s schedule has been exceptionally tough. Following its trip to Williamsburg, Virginia, JMU will have traveled over 2,500 miles in four weeks.

“We play nine straight games before we’re off. That’s not easy to do; it’s hard. It’s not easy to go on the road three straight times against quality opponents, then come back and play the fifth-ranked team in America,” Cignetti said. “Hey, it’s football. We’ve got to strap ’er up and get ’er done.”

Luckily for the Dukes, after they take on the Tribe, they have three consecutive home games before ending the season with a trip to Rhode Island. With adversity caused by a difficult schedule, it’ll prepare JMU when postseason play comes around.

For the Tribe, Mathis’ capabilities as a running quarterback emulates the play of JMU redshirt senior quarterback Ben DiNucci. When Anderson comes in, it allows the Tribe offense to be multi-dimensional, which could cause trouble for the Dukes’ defense.

“It’s a different kind of offense. They really stress you, stretch the field and stretch your perimeter,” Cignetti said. “We’re going to have to do a really good job on defense.”

In Cignetti’s early looks at William & Mary, he noted that the Tribe use bubble screens to get the ball toward the sidelines and spread the defense, paving the way to attack the middle of the field. With JMU boasting a stout rush defense, the QB duo of Anderson and Mathis will have to rely on the aerial game to compete with JMU.

3. Player’s perspective: Preparing for another test

William & Mary’s offense doesn’t light up the scoreboard, but its diverse style makes opposing defenders stay mentally prepared. For senior defensive lineman John Daka and the rest of the defense, they’re preparing for a few trick plays that could catch the Dukes off guard.

“They do a lot of gimmick plays. They do a lot of plays that has the defense thinking a lot,” Daka said. “We’re gonna be on our toes a lot; we just have to be sharp with everything we see we got to trust our eyes and our trust our teammates.”

In the last two games, the Dukes have defeated the Tribe by a combined score of 97-14. Under a new offensive scheme, JMU will have to prepare for a brand-new playbook presented by London and his coaching staff.

On top of the fact it’s William & Mary’s homecoming, it’s an in-state rivalry that has seen competitive contests in the past. JMU leads the all-time series 24-17 and hasn’t lost to the Tribe since 2015. However, with a revitalized program, the Tribe are ready to rejuvenate the rivalry.

“They’re gonna bring everything they’ve got because it’s a big rivalry game,” junior offensive lineman Liam Fornadel said. “They’re not going to let up. I think we all know that it’s just going to be another heartfelt game.”

The game will be closer than many expect. As Cignetti mentioned at O’Neill’s Grill on Monday, if one looks at the scores from William & Mary this season, there’s a significant improvement from past years. However, it won’t be enough.

JMU’s offense is finding its stride through the air and still boasts a powerful run game. The Tribe will keep it close for the first two quarters but eventually be worn out and unable to compete. The Dukes will leave Zable Stadium victorious, fending off William & Mary 31-14.

There comes a time where an athlete realizes their true potential. When I realized that I was never going to make a living on the court, I figured I’d make it on the sidelines. I hope to be able to attend and cover the World Cup and NCAA tournament.