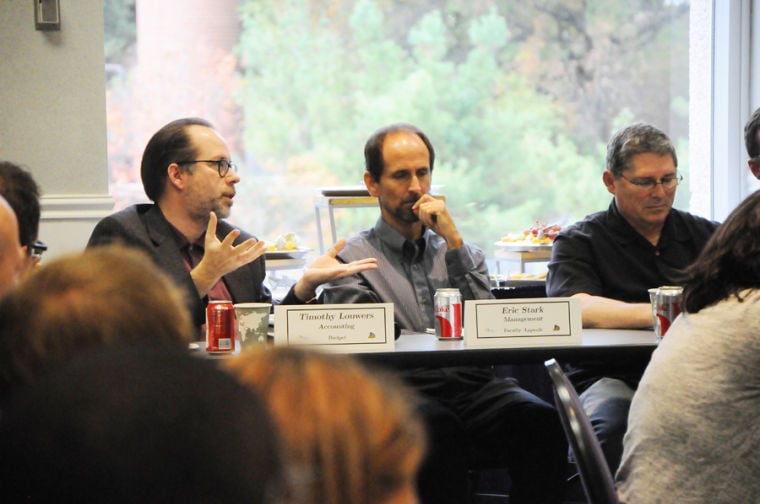 Accounting professor Tim Louwers voiced concerns about alumni not donating enough to support athletic aspirations during Thursday’s meeting. Louwers said since the many alumni support the change, they should play a bigger role in funding its budget. 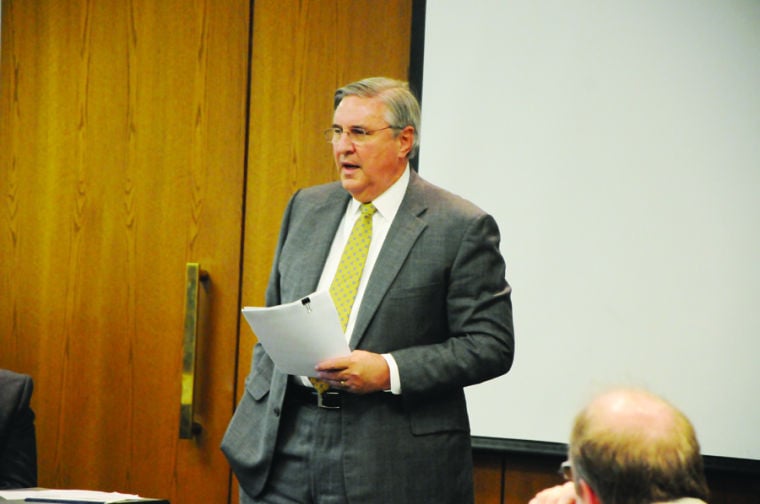 Bill Carr, president of Carr Sports Consulting, was invited to the Faculty Senate meeting Thursday to elaborate on the athletics study released at the Board of Visitors meeting two weeks ago.

Accounting professor Tim Louwers voiced concerns about alumni not donating enough to support athletic aspirations during Thursday’s meeting. Louwers said since the many alumni support the change, they should play a bigger role in funding its budget.

Bill Carr, president of Carr Sports Consulting, was invited to the Faculty Senate meeting Thursday to elaborate on the athletics study released at the Board of Visitors meeting two weeks ago.

JMU administration is putting together its plans for the future of the athletics programs, and faculty want their opinions heard.

The Athletics Department is seeking feedback from all facets of the JMU community. The Faculty Senate held a public meeting with Mark Warner, the senior vice president of Student Affairs and Academic Planning, JMU Athletics Director Jeff Bourne, and Carr Sports Consulting President Bill Carr Thursday and other community members to make sure faculty needs are a part of the decision and for faculty to hear directly from the university about its upcoming plans.

The financing of the possible athletic conference move from the Colonial Athletic Association were put at the forefront of the discussion Thursday. Carr Sports Consulting was the organization hired by JMU to conduct a feasibility study on a possible conference move. Finances cited in the meeting came from the report, which was released two weeks ago at the fall Board of Visitors meeting.

Seven percent of the total alumni network have donated back to JMU, as quoted at the meeting, which some faculty had difficulty believing would increase.

“It’s the alumni who really are pushing for this move, but they don’t seem willing to pay for it … so the question is, why can’t we pass that along to the alumni who want this?” said accounting professor Tim Louwers. “I would be very much in support of the move if it was paid for by people who are calling for this rather than it being passed onto the students.”

Carr agreed, saying that the number of alumni donors needs to “triple in a hurry” to help compensate for the lofty percentage paid for by student fees before any kind of conference realignment is possible. The Carr Report projects that by 2019, a move to Football Bowl Subdivision, the next step up for JMU in athletics, will increase alumni donations per year from $2 to $4 million.

“Long term, to fund what we have has to come from several revenue sources. Right now, as you all know, there is a heavy part of that is fee-based on the students,” Bourne said.

“I know, I write that [tuition] check every semester, so I get that.”

Bourne went on to say that wherever JMU were to move, it would take five or six years for additionally generated revenue to decrease the percentage of student fees needed to fund athletics.

In the current CAA conference, JMU student fees contribute to almost 80 percent of the approximately $33 million cost of funding athletics — $27.3 million, according to a report by the Joint Legislative Audit and Review Commission, a Virginia oversight agency.

The Carr Report’s sample projection for 2019 states that a move to any of the three sample FBS conferences would mean the overall dependence on student fees would range from 72.7 percent to 74.8 percent of the total cost of athletics. Although it varies depending on the conference JMU may switch to, the student-funded cost would be around $38 million, and the overall budget would increase to about $53 million. The student fees-funded percent of the total budget would decrease, however the dollar amount per student would increase, according to the report.

Warner said athletics directly supports JMU’s mission, and he and the strategic planning team consider it to be a core quality.

“When we look at our history, developing that total student has always been a part of that history,” Warner said. “Our wellness initiatives and our recreation we have very tight partnerships with the academic part of the university.”

He said other academic programs at JMU have direct links to the athletic program, such as the sports medicine and kinesiology programs, where students work side-by-side with athletes. It’s these programs that also benefit from possible advancement.

“I don’t tie wellness together with our sports teams,” he said. “I tie that with intramurals and UREC, so I’d like to keep some of these elements semi-separate.”

Giovanetti also said that JMU might be hurting themselves by moving into a tougher athletic conferences in the FBS.

“I think the secret of getting funding with the athletics program is success,” he said. “If you move into a tougher arena, your success deteriorates significantly, causing what I would say is a step back from some of the community interest.”

Warner responded saying that if JMU is to become a better university, it needs to make that major financial commitment.

“On the [Football Championship Subdivision] scale, in terms of annual support, there is a reliance upon the fee of what it’s going to take to support our program,” said Bourne. “Our ability to generate revenues, to help with that, is somewhat limited within the FCS.”

He also pointed out that the opportunities afforded to FBS-level schools, such as more televised games, can result in higher revenues for the school.

Alex Leidholdt, a media arts and design professor, said the current economic situation might not support increased funding in athletics.

“The fact that we’ve just been through the worst economic recession since the Great Depression and we’re just barely coming out of it now — the desperate national situation that we’ve been under in the university,” he said. “In the midst of that we’re considering putting more money into athletics, which I personally consider excessive. It’s frankly astonishing.”

Regarding the financial side of the Carr Report, some faculty members argued that with JMU already having one of the highest athletic budgets of all FCS schools, a move up would only put more burden on the students to pay.

Bourne did not have a direct answer to the students shouldering the brunt of the cost for a move up — at least until the television deals and money from bigger games starts to compensate — but he did explain that the reason for JMU’s higher spending is full-cost accounting.

According to Bourne, many schools will accredit athletics expenses to other budgets to keep reported costs down. For example, if a new building is constructed on a campus to house an athletic training facility but also has offices in it for another department on campus, the building fees can be attributed to a different budget. However, JMU Athletics operates using full-cost accounting and would report such expenses in its budget.

The dialogue between professors and the athletics representatives covered academics as well. While some were focused mainly on keeping as much school funding in academics as possible, others were concerned that a move to another conference could leave JMU surrounded by schools with lower academic standards than it has seen in the CAA.

Transparency in this process was one thing the faculty immediately thanked the athletics representatives for on Friday. According to Carr, whose company has consulted with hundreds of universities, this transparency is actually quite “unique” to JMU.

“JMU is in the higher level of ‘due diligence’ so I think it is exemplary from JMU in my judgment professionally to have forums like this and these other methods of contact and input that come from online and in person,” Carr said.

David McGraw, speaker of the Faculty Senate, opened the meeting with a statement that before this administration, an open dialogue such as Thursday’s probably would not have happened.

Both Bourne and Carr were pleased with the feedback they received from the Senate.

“We’ve got colleagues at other institutions that have gone through this and there’s not this kind of dialogue,” Bourne said after the meeting. “That’s not clearly what we want, and what we expect.”

Bourne and the athletics department have reached out to many student and alumni groups for feedback on the report as well, but encourage those who have not yet given their feedback to do so. If you wish to give feedback to the university, go to jmu.edu/madisonfuture before Friday.