The public submitted a stack of 650 comments gauging JMU and the Board of Visitors’ (BOV) COVID-19 response to the university’s input form prior to the BOV meeting Sept. 18. 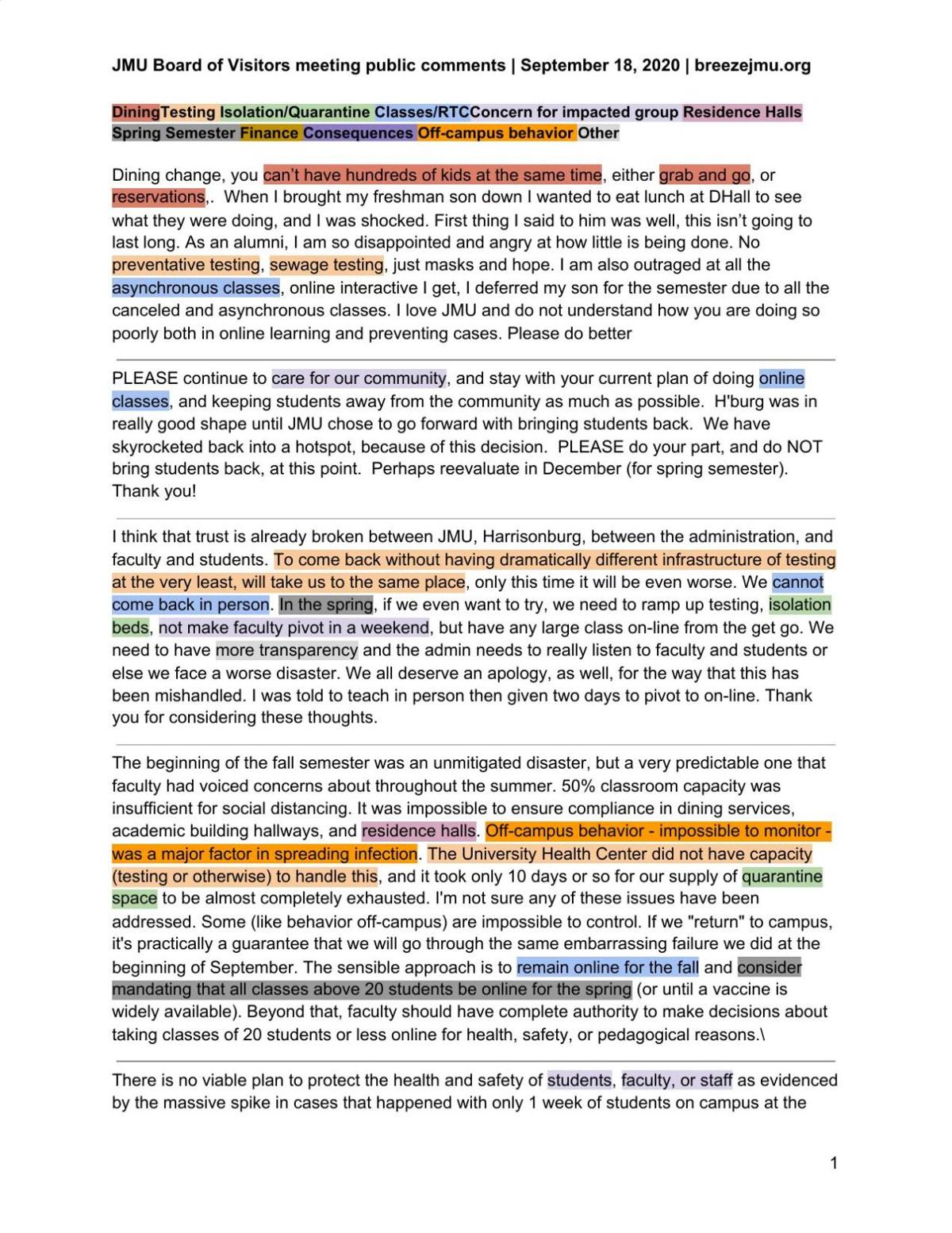 Of the 650 comments, 190 individuals explicitly stated that they believed JMU should remain online this fall, and 184 said the university should return to on-campus operations — a near even rift in opinion.

In total, 464 commenters mentioned reforms they’d like to see in classroom procedures — ranging from demands for reduced capacity in classrooms, hybrid classes and no asynchronous classes to their opinions on whether to return to in-person learning.

One commenter said there’s “no viable plan to protect the health and safety of students, faculty or staff,” evidenced by the “massive spike” in cases within a week of students on campus. Instead, they wrote, resources should be focused on supporting faculty in developing “highly effective online courses” and not on “wasteful ideas of a doomed return.”

An out-of-state parent wrote that their freshman daughter started showing symptoms of COVID-19 on Sept. 4. She tested positive at an off-campus care facility. Because freshmen without an exemption were required to move out by Sept. 7, the commenter drove from upstate New York to scoop their daughter and return home. The pair rode with masks on the entire seven-hour drive, and the daughter lived in complete isolation from her family upon return. Still, on Sept. 12, the survey commenter lost their sense of taste and smell and experienced sinus congestion. A positive test result forced the commenter to take time off work.

“All of this could have been avoided if [there was] proper infection control and prevention strategies, prior testing and [allowance for] our students to remain on campus to quarantine if needed,” the respondent said.

On the flip side, a commenter in favor of returning to campus said that the only way the virus will be eradicated is by “mass immunity.”

“Let the kids return,” they wrote. “… To delay this could change their lives.”

Another out-of-state parent said they’d prefer a return to campus because they think JMU’s online learning experience should improve. They said that many of their student’s lectures feature no “live” contact.

“We can go to the University of Phoenix for that,” the parent said. “… It’s time to get back to educating because if it continues down this path we will honestly revisit our choice. We are investing a good amount of money as an OOS student for a little reward.”

Changes to life on campus

Outside opinions about the classroom, commenters were most concerned with testing and dining hall procedures.

Vice President for Student Affairs Tim Miller said at the BOV meeting that UHC will implement surveillance testing. The health center will randomly sample 300 students per week — or about 5% of the on-campus population — to monitor the state of the pandemic at JMU. Miller did maintain the university’s position not to conduct entry testing, citing CDC recommendations.

The survey also laid clear that the dining halls are overcrowded. Of the 196 individuals who commented on campus dining operations, 85 called on the university to reduce capacity in the restaurants. Grab-and-go meals were the next most popular response, with 77 people requesting the option. Seventeen respondents championed the idea of students phoning in reservations for dining times “like a cruise ship,” 16 called for no in-person dining and one person proposed hiring student dining monitors to hunt mask and social distancing violators.

At the BOV meeting, Towana Moore, associate vice president of business services, said students are now required to flash their green check from the LiveSafe app to cashiers when paying for their food. Additionally, the dining administration has reconfigured lines of popular dining areas to increase social distancing space in line. Dining services also reduced seating in D-Hall from 1,100 seats to 600.

Forty-four comments advised JMU to fortify its isolation and quarantine capacity. At the BOV meeting, the board discussed JMU’s plan to expand its sick bed volume from 143 to over 430 by “essentially buying out” the Sleep Inn on Evelyn Byrd Avenue. JMU has also bolstered its quarantine-in-place capability to accommodate over 1,430 students whose bedrooms and bathrooms aren’t communal.

Consequences for the JMU community

As of Tuesday, the Office of Student Accountability and Restorative Practices (OSARP) was pursuing 309 sanctions against students who violated the Stop the Spread Agreement. However, 86 commenters urged harsher consequences for students. Off-campus behavior was targeted by 26 respondents as a catalyst for contagion.

Two commenters noted that it’s a “bad business decision” to resume full in-person operations. They wrote that alumni and benefactors will be hesitant to donate, and high schoolers will be wary to choose JMU.

Budget cuts loom in the wake of campus’ closure. Five people who filled out the survey said the first round of cuts should target “full-time administrators who helmed this Fall’s Titanic.” One commenter wrote that administrators making more than $150,000 a year should face a pay cut of 5-10%. Another suggested that since adjunct professors’ salary was cut an average 25%, a “comparable or greater reduction in compensation is more than fair” for administrative and professional faculty earning more than six figures. One participant wrote that an administrative pay cut would demonstrate the administration’s “up-to-now calculated avoidance of admitting fault.”

“I’d like to see the fault of galactically mismanaging reopening fall squarely on the people who so dramatically insulated themselves from the faculty, rather than to let the inevitable budget cuts land on the faculty,” the commenter wrote.

Also laden throughout the public remarks was concern for impacted groups’ safety: 83 commenters said they feared for students’ welfare and six said they were cognizant of the at-risk populations’ jeopardy.

One commenter said their daughter has spent more time in quarantine because of potential exposures than she’s spent in class.

“The concern about where is and is not safe to go on campus has turned JMU from a center of learning into a gauntlet of mistrust and concern,” they wrote.

Conversely, another survey responder called on the board to reopen for students’ safety, citing that isolation has led to an increase in suicides and mental health declines.

Forty-four members of the public said they worried over the safety of JMU’s faculty and staff. One professor said his contract won’t be renewed because of budget constraints. They said if they’re denied the ability to continue teaching online, they’ll quit or pursue legal options.

“I loved JMU as a student and cannot say the same as a faculty,” they said. “It is not all about the students. It is not about the faculty and taking care of your staff. It is about the money.”

On the other hand, another faculty member said they “feel safe on campus” because students are effectively wearing their masks and infections are linked to off-campus spread.

“I think that we on a philosophical level need to accept that cases will occur here in Harrisonburg and get back to the business of educating our students via in-person experiences,” the commenter said.

Sixty-five respondents expressed their anxiety because of the “egregious” disrespect for the Harrisonburg community shown by JMU.

One community member pleaded that JMU continue virtual learning so that local children can return to in-person learning.

“Please if you care at all about the Harrisonburg or Rockingham County communities and the children and adults who live here, DO NOT bring your students back in person,” the participant wrote. “… College students are more than capable of learning virtually. Young children, ELL, and those with special needs are not!!! Please make your decisions based on science and morality and not MONEY!!!!”

Another member of the community said they’re pregnant with their fourth child and was exposed to COVID-19 because of a JMU student.

Effect of public comments on BOV

Some commenters wondered how their input would factor into the BOV’s decision making. One faculty member said they weren’t convinced that their input would amount to anything because the form was obscurely located — only accessible at the bottom of the BOV meeting notice.

“It doesn’t matter what my feedback is here,” the professor wrote. “This is all for show … This survey was buried.”

Director of Communications and University Spokeswoman Caitlyn Read said this survey wasn’t the only opportunity the public had to disclose their opinions and that “meetings aren’t the only time the board is engaged.” Read said offices across campus and board members have received thousands of emails from concerned JMU community members detailing their fears.

“This [survey] was helpful,” Read said. “… I hope the public feels like they have a voice.”

The Breeze asked Read when the BOV obtained access to the survey three times but never received an answer. The Breeze also reached out to 10 members of the BOV to inquire when they accessed the comments and if the comments informed their decisions before the Sept. 18 BOV meeting but only received an answer from Student Representative to the Board of Visitors Norman Jones III. Jones wasn’t in attendance at the meeting, but he said he was never offered access to the comments and wasn’t aware of the public comments survey at all.

One commenter said they hope the university will continue to receive and take into account the public’s input on this unprecedented event.

“Faculty, staff and students spend quite a bit of time exceptionally concerned and desperate to contribute to the conversations,” the commenter wrote. “… Many of us have faithfully and thoughtfully engaged in every single one of these requests but have never heard a word about how our investment in this process has been honored.”

Ivan Jackson contributed to this report.

Timeline | A look back on COVID-19 at JMU

The COVID-19 pandemic has affected nearly all aspects of life at JMU. Take a look back on all the changes JMU faced over the past year.