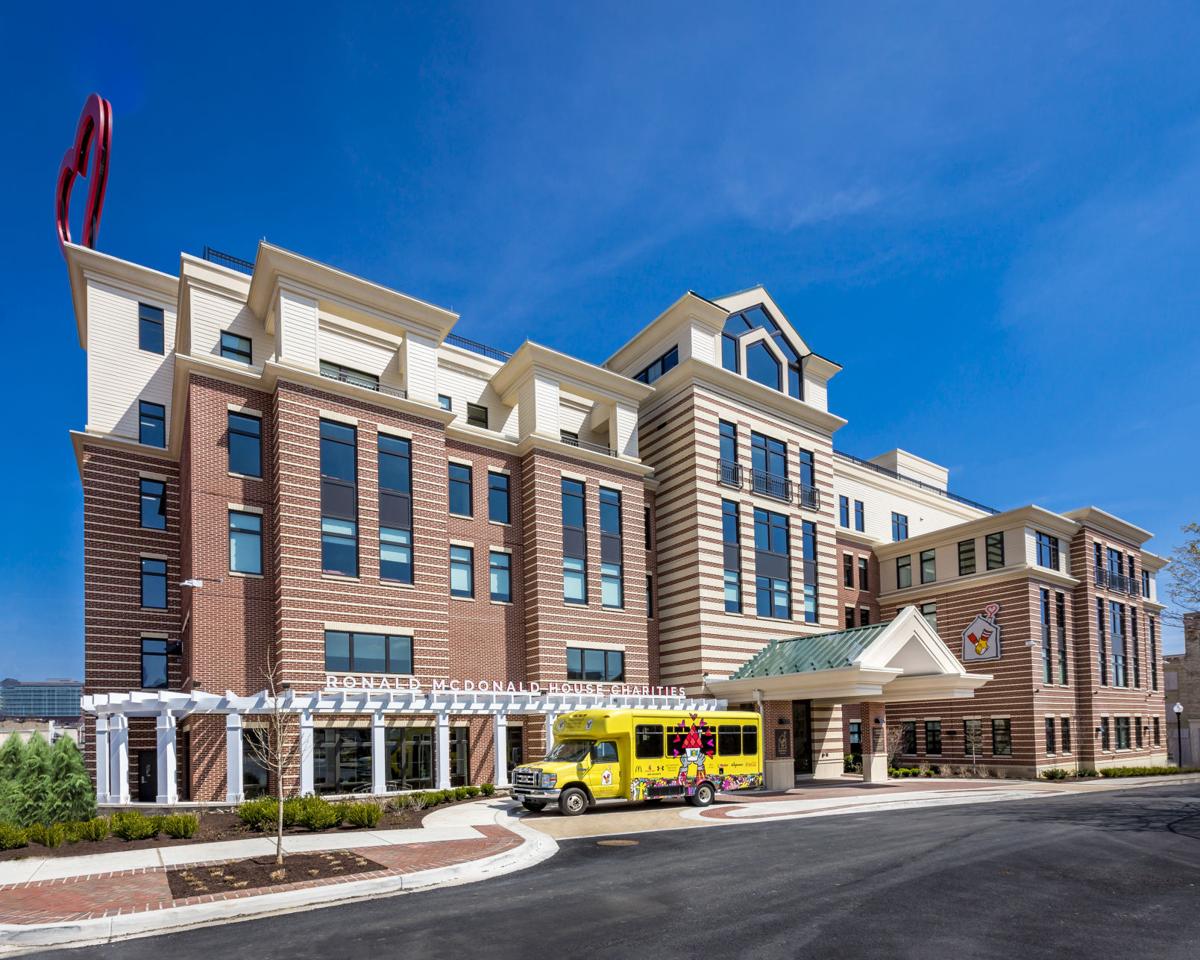 Pagnotti ('85) is the CEO of the Ronald McDonald House in East Baltimore. 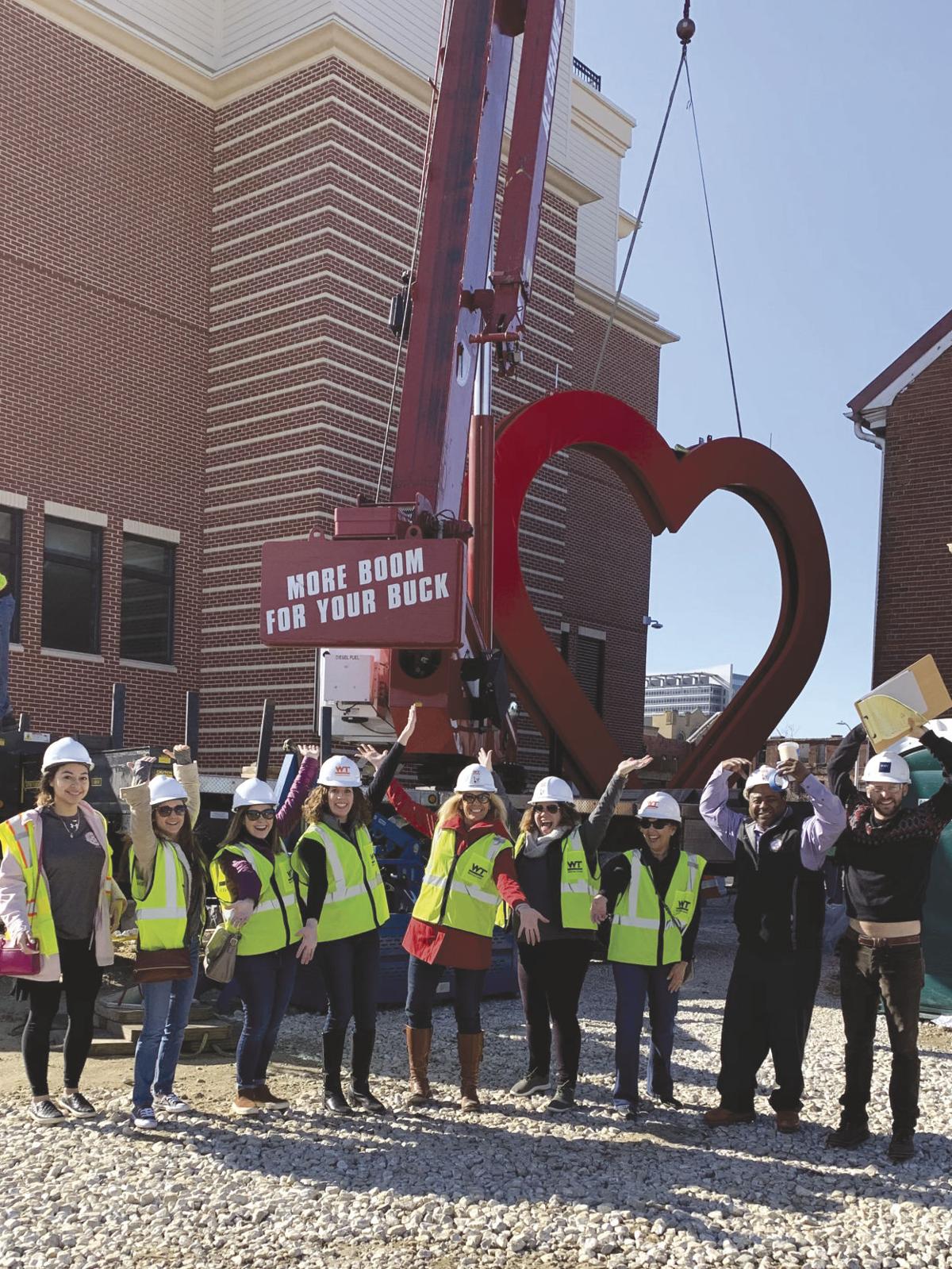 Pagnotti, center, stands with others as they work on-site at the new Ronald McDonald House location in East Baltimore.

The only Ronald McDonald House in Maryland opened in 1982 in West Baltimore. When the old house ran out of room for families in need, a new one opened in East Baltimore in 2019 to replace it. Sandy Sheen Pagnotti, JMU alumna (’85), is the CEO of the new house and was in charge of building it from the ground up.

“We had a waiting list every night of 30 to 40 families,” Pagnotti said. “There were up to about 700 families a year that we were turning away because the old house was too small.”

The new house can sleep up to 55 families a night, and 2,400 families stay each year.

After earning her undergraduate degree from JMU in marketing and public relations, Pagnotti went on to work for profit marketing companies for 25 years, one being the marketing company PW Feats. She wanted to switch up her career path, so she applied to be the CEO of the new Ronald McDonald House. Pagnotti learned she got the job right after she dropped her youngest child off at Dingledine Hall, the same dorm she lived in her freshman year at JMU.

“I dropped her off, and I was driving up 81, and I got the phone call that I got the job here,” Pagnotti said. “So, I basically made a career switch 10 years ago, and it’s the greatest thing I ever did.”

One of the reasons Pagnotti was interested in becoming the CEO of the new House was because she said she can relate to the families in need. Pagnotti said her brother has had “significant medical challenges” his whole life.

“Truth be told, the work feels like I’m honoring my parents and my brother by what we do,” Pagnotti said. “I understand these families.”

Diane Robinson, president of DLR Marketing, a marketing firm that’s partnered with the Ronald McDonald House for almost 10 years, said construction of the new house started in 2017. Robinson also went to JMU and graduated the same year as Pagnotti.

Like Pagnotti, Robinson has watched the new House blossom from only an idea into an actual establishment.

“It’s been a long time in the making,” Robinson said. “It started out as just a dream, like, back in 2012. We started working with the house in 2010, and then in 2012, it was when we really started to look at growing the house because there just wasn’t enough room for all the families who had a need.”

The Maryland Ronald McDonald House is one of many that cares for the most international people in the world because the Johns Hopkins Hospital and other big medical centers are nearby, Pagnotti said. Additionally, she said that last year, children and their families came from 23 different international countries and all 50 states.

Even though children and their families come from all over, the house still serves those who come from Maryland as well. One of those families is the Dixons.

Ashley Dixon, a 19-year-old Frederick, Maryland, native, has been coming to the Maryland Ronald McDonald house for four years. Dixon said she’s had “like 10” genetic disorders since she was little, such as Ehlers-Danlos syndrome — a disorder that affects connective tissue — but her diagnosis of Guillain-Barré five years ago is why she started coming to the Ronald McDonald House.

Guillain-Barré is a rare disorder that causes one’s immune system to attack their nerves.

She has the Miller Fisher’s variety of Guillain-Barré, which increases her risk of death. This disorder left Dixon paralyzed from head to toe, but luckily, she’s no longer paralyzed. She said she can thank physical therapy and IVIG — an immunoglobulin treatment used on patients with autoimmune illnesses — for recovering from paralyzation.

“With 80% of patients, it’s fatal, but obviously, I’m the lucky 20%,” Dixon said. “I started walking May of last year after five years of not being able to walk. I couldn’t lift my head up, I couldn’t shrug my shoulders, I couldn’t look at you, I couldn’t talk. So, I’ve come a long way.”

Dixon said over the past four years, she and her mom have stayed at the Ronald McDonald House in Baltimore for usually one week every month — but sometimes more — while she gets her treatment at Johns Hopkins. Before she started staying at the Ronald McDonald House, Dixon said her mom would stay at the hospital in a reclining chair that didn’t really recline, and she didn’t really eat.

Fundamental tasks like eating and sleeping aren’t concerns for the families while staying at the Ronald McDonald House, Dixon said. Robinson said the house provides three meals a day to those staying there.

“Most of the time, they’re just so concerned about their kids being sick that they forget to take care of their basic necessities, like eating,” Dixon said. “It’s so fantastic what they do here and how they help us by giving us the place so we can be close to the hospital and get everything that the doctors recommend.”

“When you’re here, you get a level of acceptance that you don’t get from the outside world,” Dixon said. “Everybody is here because their child is sick, you know; that’s the bottom line. We can all relate.”

Pagnotti said the No. 1 thing people ask her is how she does her job, as it seems sad. She said she always replies with, “not if we can help it.”

She said they can’t make medicine taste better or the treatments hurt less, but they can try their best to provide comfort and happiness.

“Our team mantra is that what we want the house to be is the Ritz [Carlton] meets Disney, meets grandma’s house,” Pagnotti said. “We can operate the services like a Ritz Hotel meets Disney, that it’s family-friendly and magical and fun and all about kid’s needs, and grandma’s house, that it’s loving and nurturing and you feel taken care of and loved.”