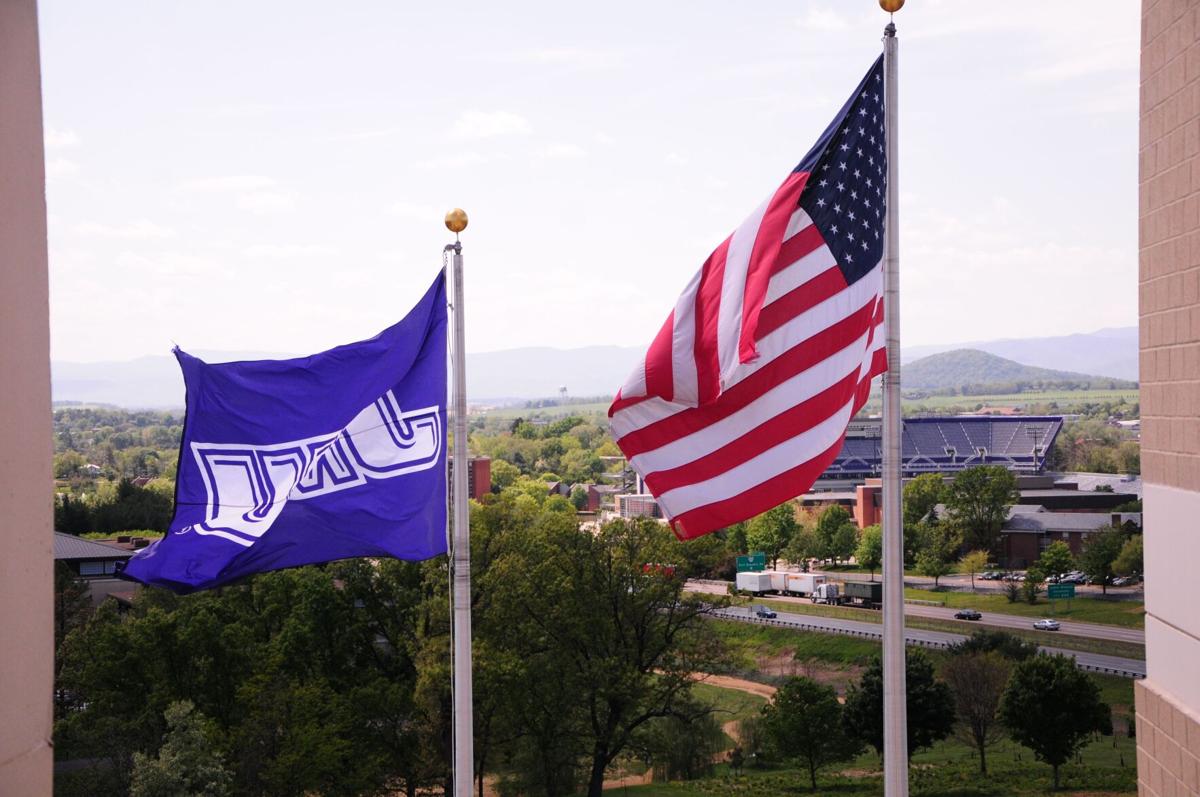 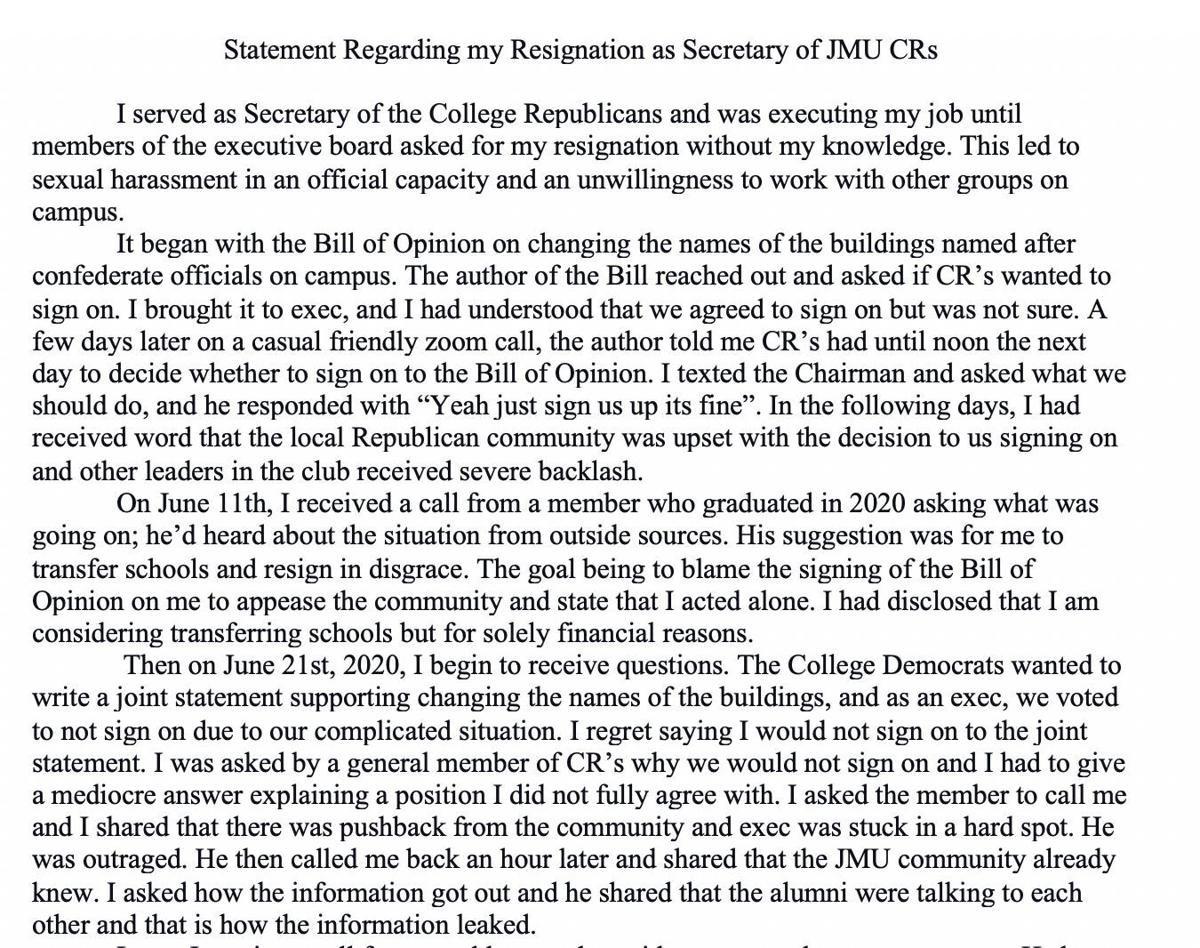 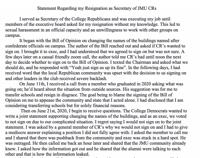 Osbon described the incident of sexual harassment that occurred over a Zoom call. 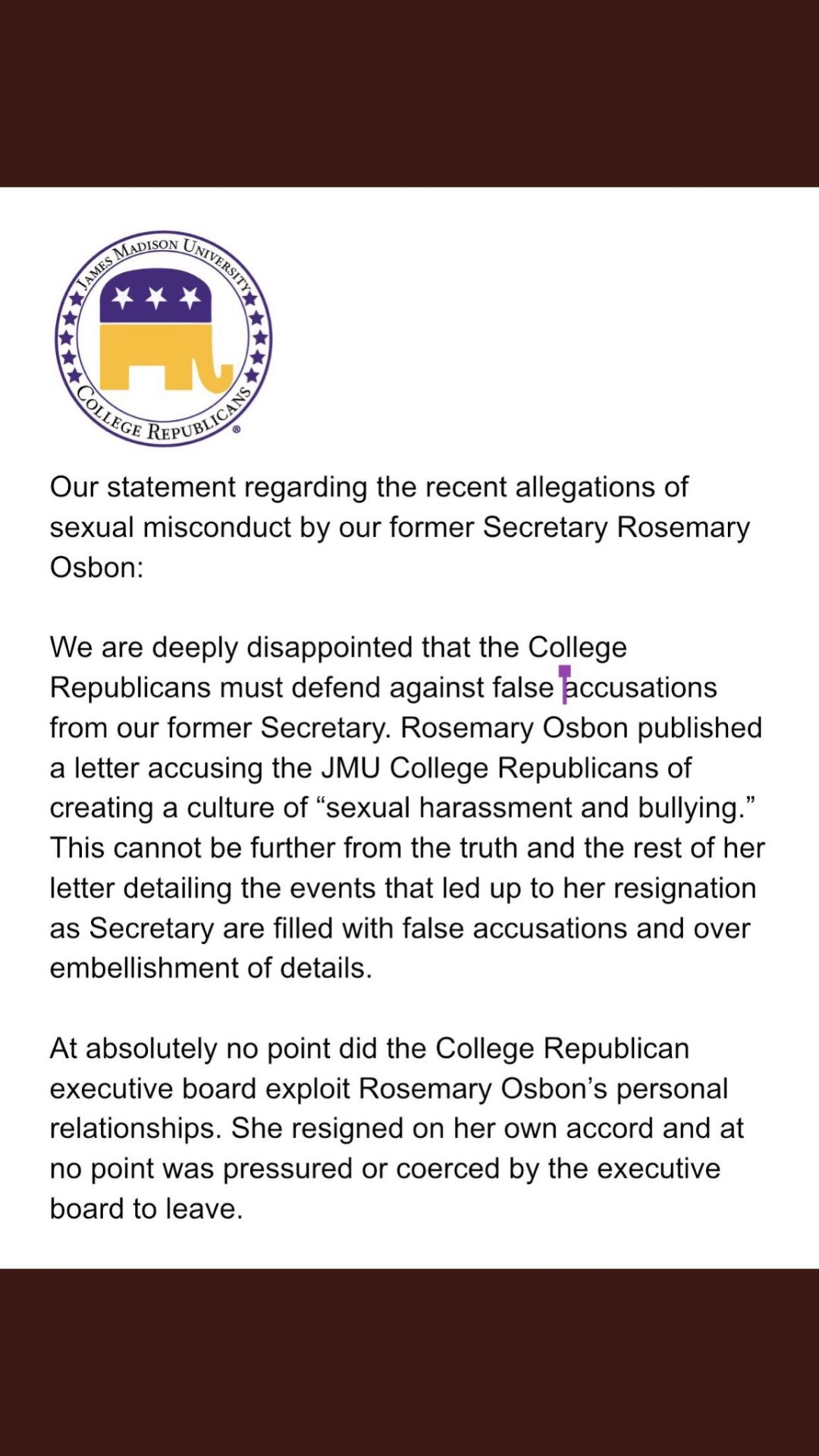 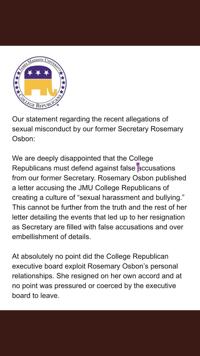 The statement was taken down shortly after its posting. 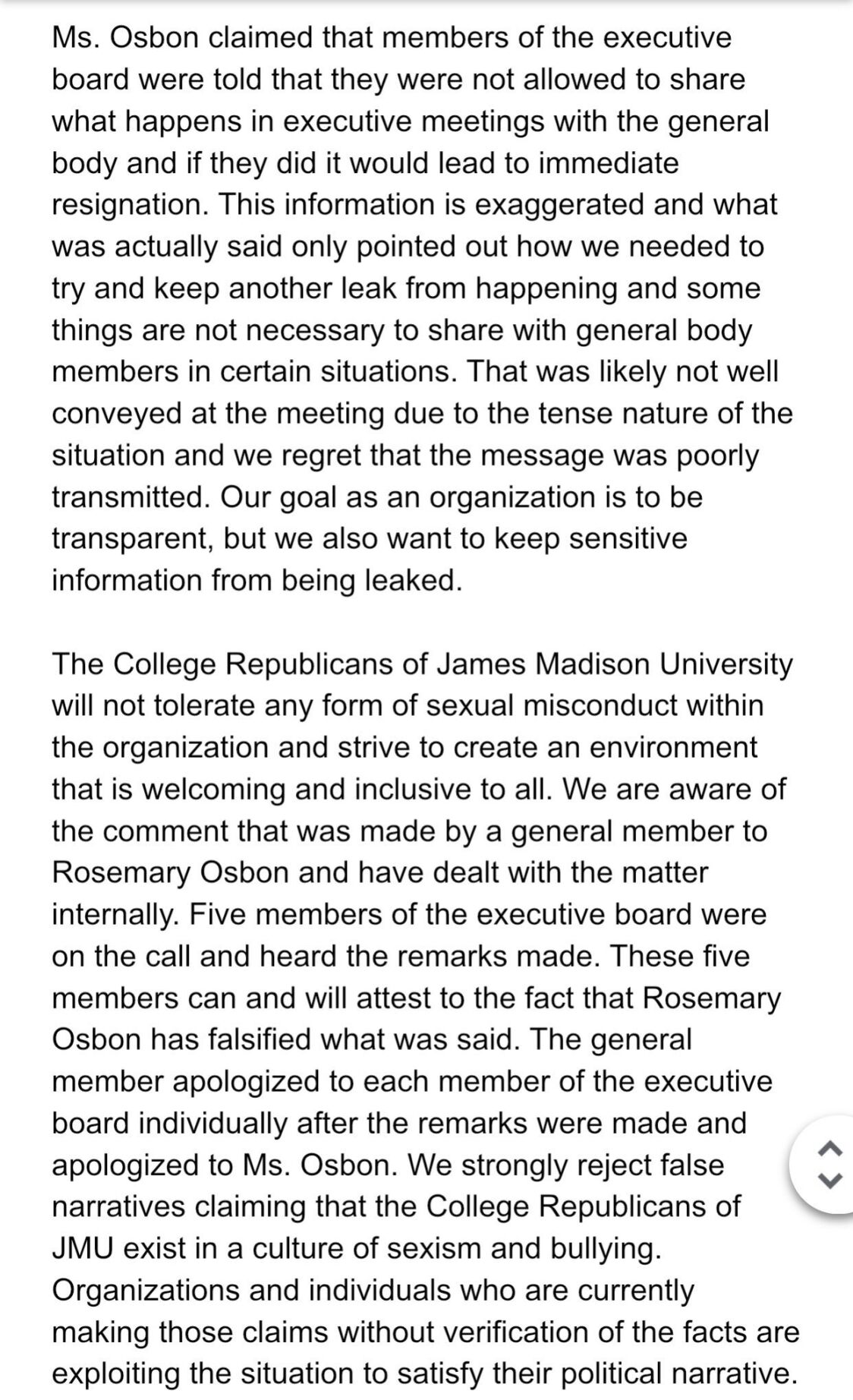 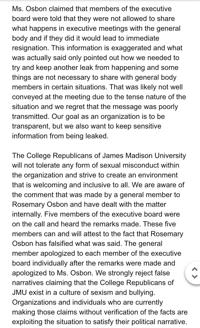 Multiple members of the Executive Board stated said the statement was taken down at the advice of the College Republican Federation of Virginia.

On Wednesday morning, in an email from JMU’s Office of Student Affairs obtained by The Breeze, the College Republican executive board was notified that the organization has been found responsible on charges of harassment and defamation against Rosemary Osbon, the former College Republicans secretary who resigned June 22.

“It’s a good day for me,” Osbon said. “Having, you know, like, a governing body kind of say, like, ‘Yeah, this is messed up, and y’all need to fix some mess,’ is really important to me.”

The College Republicans have declined to comment at this time, citing that it would be “premature,” as the situation is developing.

In Osbon’s statement published on Facebook — which described the incident of sexual harassment she received on a Zoom call meeting of the executive board prior to her resignation and a culture of harassment and bullying within the organization — she said, “There have been many other instances of unprofessionalism and bullying [within the College Republicans] … Today I am only telling this story...there are many more.”

The Wednesday morning email from the Office of Student Affairs stated the following:

“My investigation revealed many instances of harassment and bullying present in College Republicans that went unchecked. These instances were perpetrated by a number of individuals, in a number of circumstances, with no action taken on Rosemary’s behalf even when it was reported to leadership … This directly indicates a pervasive and toxic culture within the organization.”

However, the email states that the Office of Student Affairs “charge[s] this group of executive members to truly look at [Rodriguez’s] behavior and decide if it is reflective of College Republican’s values as an organization and determine if you want to continue having [Rodriguez] as a member.” While recognizing that Osbon was “the other half of the argument,” the Office said it’s “extremely disappointed and alarmed that the only repercussions against [Rodriguez] was a text reprimand.”

As a result of the investigation by the Office of Student Affairs, the College Republicans’ statement has been found to have been defamatory of Osbon.

The statement from the College Republicans stated the following:

“We are deeply disappointed that the College Republicans must defend against false accusations from our former Secretary. Rosemary Osbon published a letter accusing the JMU College Republicans of creating a culture of ‘sexual harassment and bullying.’ This cannot be further from the truth and the rest of her letter detailing the events that led up to her resignation as Secretary are filled with false accusations and over embellishment of details … We strongly reject false narratives claiming that the College Republicans of JMU exist in a culture of sexism and bullying. Organizations and individuals who are currently making those claims without verification of the facts are exploiting the situation to satisfy their political narrative.”

The email from the Office of Students Affairs states that the Office, “understand[s] the need to protect the organization against accusations that you feel are unfair, but to use the club platform directly associated with JMU to personally attack a former member is inexcusable … The statement reads as defensive, unprofessional, and intentionally calls into question Rosemary’s judgment and reputation without giving evidence of how she first made ‘false accusations and over embellishment of details.’”

Requirements of the College Republicans

The email from the Office of Student Affairs said that in the Office’s investigation, it discovered that nowhere in the College Republicans’ bylaws is there an “established mechanism in place of how to handle harassment, bullying, or other misconduct by a member (other than removal).” In response, an amendment to the constitution must be drafted by the organization no later than the end of the fall semester that creates an internal reporting system, a system for incident follow-ups and personal sanctions, and publicly acknowledges that the College Republicans “committed to non-harassment and anti-bullying based on definitions found in the JMU Student Handbook.”

Additionally, according to the email from the Office of Student Affairs, all members of the executive board and at least two thirds of the general membership must attend at least three “professional development opportunities” by the end of the 2021 spring semester. Options given included “Green Dot Bystander Training by The Well.”

Green Dot replaces Dukes Step Up, which is a more reactive approach to preventing power-based violence.

Finally, by Aug. 26 — the start of the fall semester — the executive board must send the general membership an “acknowledgment that the organization was investigated and found responsible and is thus trying to improve the culture.” The email states that while this isn’t intended to be a forced apology to Osbon, the general membership “deserves to know more thoroughly what is currently happening and what to expect in the upcoming year, and why.”

While the Office of Student Affairs also didn’t mandate the removal of any current executive members in its email, the JMU Student Government Association (SGA) passed a resolution July 14 stating its support for Osbon and calling for a public apology and the immediate resignation of the entire executive board.

In a private communication from SGA leadership to the College Republicans executive board obtained by The Breeze, SGA leadership stated the following:

“If no further actions are taken by those culpable to the relevant events then the relationship between our organizations will be reconsidered. Based on the sentiments of our members’ vote, we will not partner with your Executive Board as it stands today but will still ensure that bipartisan discussion, input, and partnership is found in other student organizations at JMU moving forward.”

For Osbon, she said following from the investigation by the Office of Student Affairs, she’d like to see the executive members of the College Republicans apologize to her, but she said she’s not confident that’ll happen.

“It’d be kind of cool if they, you know, reached out to me and was like, ‘Hey, like, I’m really sorry,’” Osbon said. “I would love that, but I definitely don’t think I’m going to get it.”