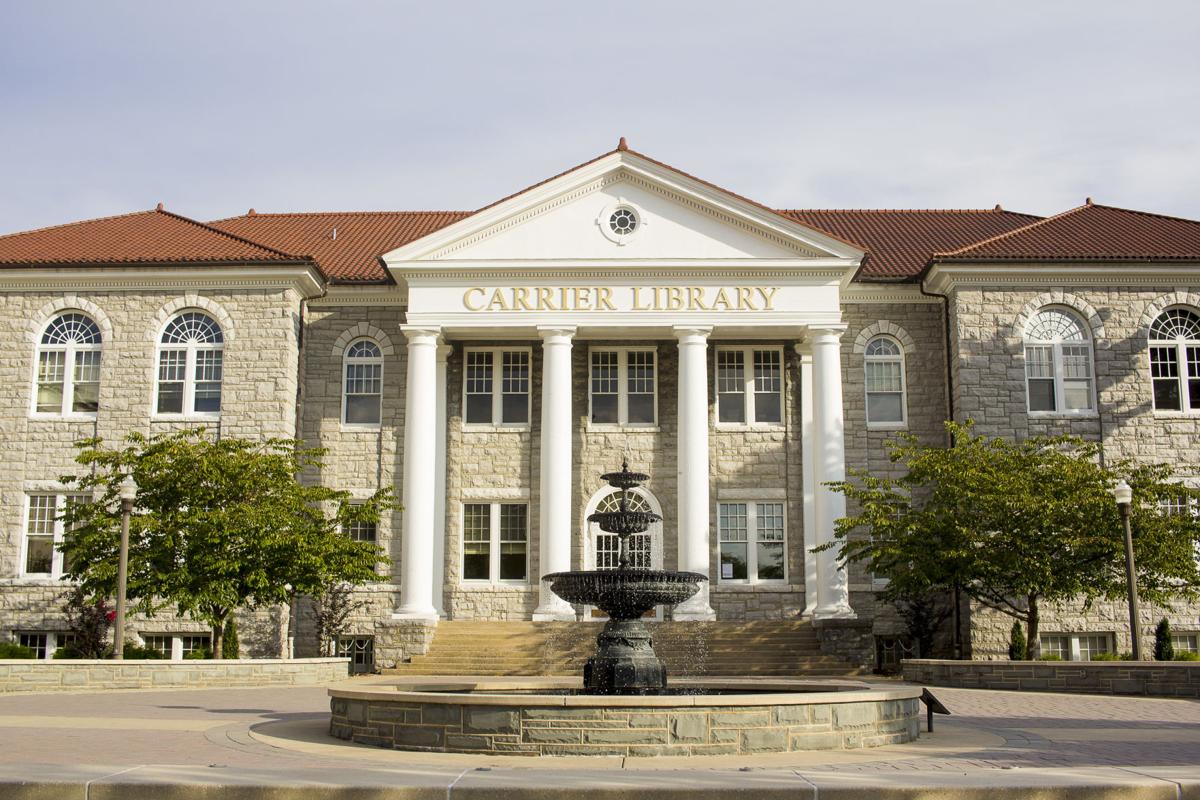 The construction of Carrier Library cost $2.55 million in today's currency. 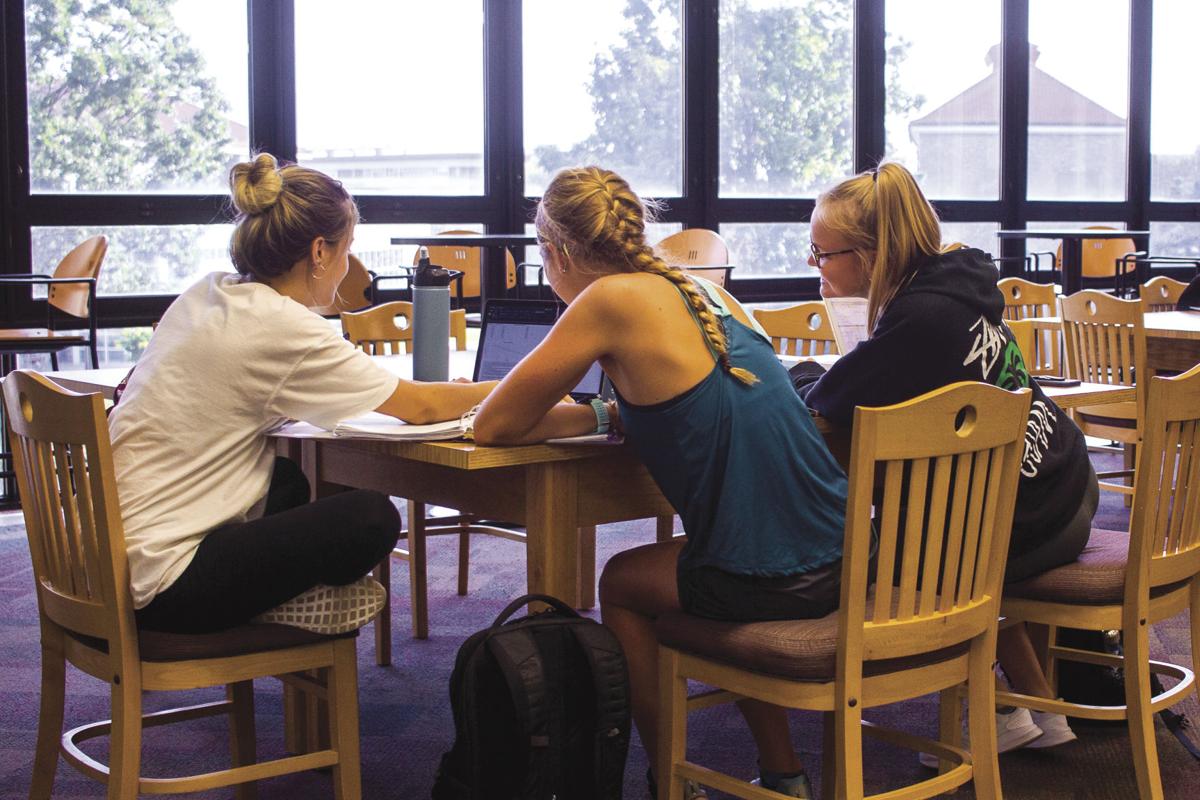 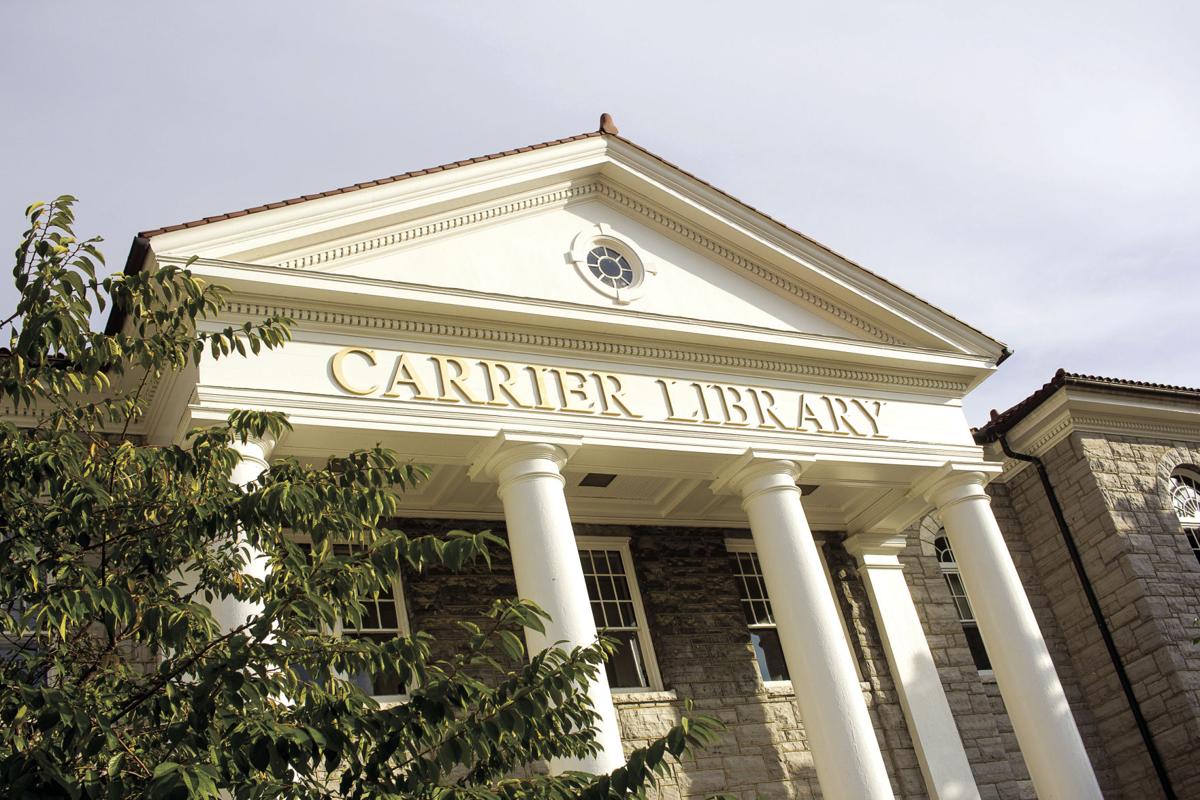 Carrier Library is filled with over 520,000 books.

Filled to the brim with over 520,000 books, Carrier Library — one of the core buildings on campus — has overlooked JMU from its perch on Bluestone for 80 years.

At the height of the Great Depression and on the cusp of World War II, Madison College’s second president, Samuel P. Duke — nicknamed the “Builder” — ordered the $140,000 construction of the Madison Memorial Library, which equates to approximately $2.55 million today. The building, which was renamed Carrier Library, was completed in 1939 where a tennis court used to dwell, according to “Madison College: The First Fifty Years” by Raymond C. Dingledine, Jr., and featured a checkered floor lobby and a pristine white Joan of Arc sculpture that still guards Carrier Library today.

Debbie Ryman was a student at Madison College in the early 1970s before she accepted a position working in Carrier Library. Her graduating class was the first to welcome an even ratio of women and men registered at the college under fourth president Ronald Carrier’s leadership.

“It was a really small school at the time,” Ryman said. “You look out the window, and there was nothing but a hill. My father used to metal detect over there and find stuff from the Civil War where the soldiers would camp.”

Carrier’s presidency was trademarked by massive expansion, as is stated in “Images of James Madison University 1908-1983: Blue Stone Hill to JMU.” He was determined to be the president that transformed the school to meet regional university accreditation standards that ensure students obtain a breadth of knowledge, which no Virginia college had accomplished at the time.

Since the college largely appealed to women due to its roots as an all-women’s school, Carrier decided to broaden the academic programs to appeal to male students and implemented an intercollegiate athletic program. This sparked the building of Bridgeforth Stadium in 1975, ending the public’s conception that JMU remained a women’s college despite the institution having integrated men into the student body decades earlier. The value of the university soared from $30 million to $143 million under Carrier’s leadership from 1971 to 1998.

In 1971, President Carrier broke ground on the extension of the library, which doubled the size of the building. Construction was split into three phases — one for each level of the library — and wouldn’t conclude until 1995 to allow for the fluctuating enrollment rate, specified in “1908-2008 Madison Century: Celebrating 100 Years.”

“The jackhammering, oh!” Ryman said. “I don’t know how many weeks of the hammering and the noise and the dirt it was.”

Tillie Hannah has been working at the library since 1977, just after alumni like Ryman voted to change the college’s name to James Madison University. Hannah has seen JMU’s enrollment increase from about 7,000 students to over 21,000.

“Carrier is just always busting,” Hannah said. “After Rose opened, you thought you might have a little more walking room, but no. The kids just love it here.”

Amel Al-Kilany, a senior political science major, said she “basically lives in Carrier.” She reserves a table in the morning for her professional foreign service fraternity, Delta Phi Epsilon, and then weaves in and out of the building between classes throughout the day. She’s also been working in Carrier for three years. She said she feels pride in her job when other students recognize her on campus for her position checking books in and out of the campus hub.

“As a senior, I’ve been reflecting a lot on my past few years here,” Al-Kilany said. “I’ve come to the conclusion that when I graduate, I’m going to miss Carrier the most.”

Al-Kilany sits at the front desk most days, but the original checkout desk is nested on the second floor at the top of the wooden staircase in the original Bluestone side of the building.

Mary Ann Chatelain began working at the library around the same time as Ryman and Hannah. She said she appreciates how the building’s decades of growth resulted in sections with wooden banisters, big windows and arches. Others are built mostly of glass, metal and concrete with more open spaces instead of smaller rooms.

“The building extension kind of goes along with how everything has progressed,” Chatelain said. “It reflects the time.”

The Madison Memorial Library was renamed Carrier Library in 1984 after the second phase of construction was completed to honor the president who made its augmentation possible.

The three librarians who’ve spent four decades keeping Carrier Library’s wheels turning said they share many memories together. Ryman recalled that Hannah began working at the library  the day Elvis Presley died. To honor him, Hannah displayed a cardboard cutout of Elvis for years. One day, a student managed to sneak the lifesize King of Rock ‘n’ Roll out of the building “never to be seen again.” A second Elvis has since taken his place.

“In the older days, it was like a family,” Hannah said. “Now, it’s an extended family because our staff has grown so much.”

The first library on campus resided in the south end of the first floor of the Science Hall, which was renamed in 1917 to Maury Hall, with a maximum student occupancy of 40 students. Dingledine’s historical account of the library states that initially, it contained only one book — the Bible — but it grew to house over 2,000 books by the end of 1908, the first year the college was open. The library was manned by a single librarian, Mary I. Bell, who also doubled as the registrar and receptionist for President Julian Burruss, the college’s first president. The library now contains 119 full-time employees, 32 part-time employees and approximately 90 student employees, Hannah said.

For research assignments in the 1970s, students competed for two computers that offered databases. The librarians said people would stand in line for hours waiting for the chance to use them. The other popular means for research collection was in the form of card cataloging.

“When I first started here, every morning you took a big stack of cards to the card catalog to be filed,” Hannah said. “If something changed, like an author passed away, you’d pull that chunk out, and you had to retype them up on the typewriter.”

In the late 1970s, Hannah remembered the library only having one office phone. When phone calls came in, the bookkeeper shouted down the hall for whomever the caller was trying to reach. Hannah said this strategy would be impossible after the boom in staff personnel due to the addition of departments that address classroom technology.

“The advancements in technology and increase of enrollment keeps you fresh,” Chatelain said. “There’s always a challenge to learn something new and take on new challenges. The job never becomes stale because the library has always been the forefront of changes.”

Ryman said her 42 years at the library have “zipped by.” She and her fellow “long-timers,” Hannah and Chatelain, said they’ve felt privileged to work at Carrier Library for so long.

“We’re here to support the students, their education, their knowledge,” Hannah said. “No matter what you’re doing, if you’re ordering the book, cataloging the book, getting an article, paying something, it’s all for that purpose. We feel useful, like we matter and like we make a difference.”

Al-Kilany spent last fall studying in the Washington Semester program. When she arrived back at campus in the spring, the first thing she did was visit Carrier Library.

CORRECTION (Oct. 3, 3:30 p.m.): A previous version of this article stated that Burruss Hall housed the library until 1953. However, the the building in question was actually Maury Hall.