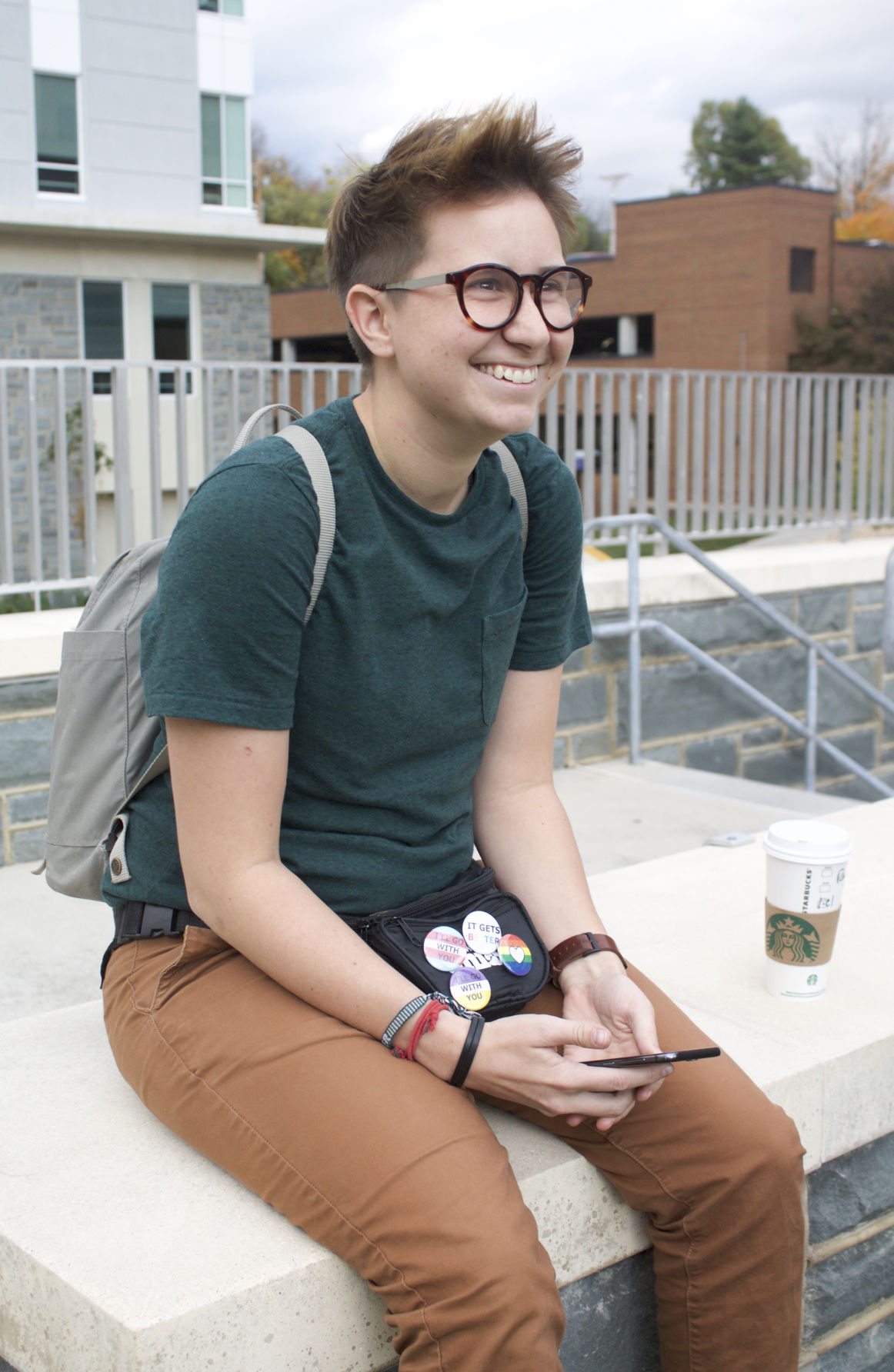 Rain Garant is a junior English major and identifies as transgender. He also helps students in the LGBTQ community who are going through similar experiences. 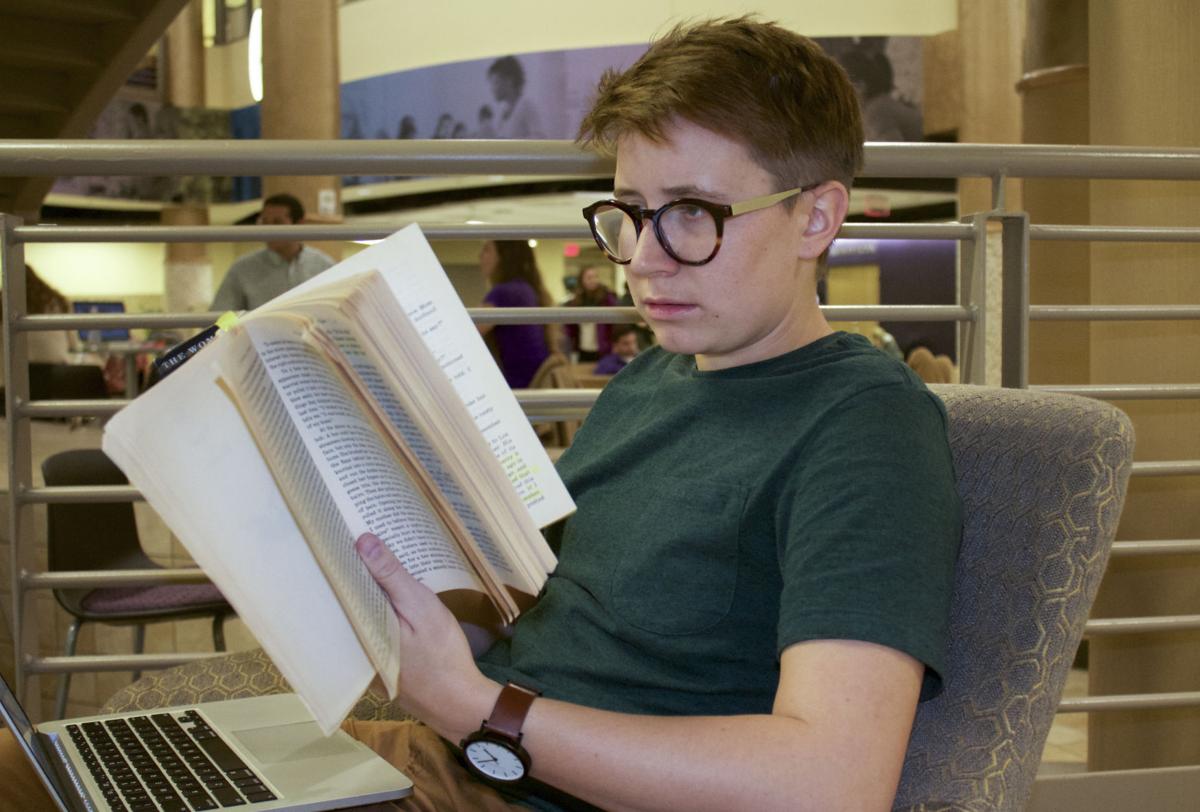 Rain Garant is a junior English major and identifies as transgender. He also helps students in the LGBTQ commnunity who are going through similar experiences.

As the robotic beep intensifies with each repetition, Rain Garant gets out of bed and silences the alarm. He opens the closet door to examine his seven pairs of pants, seven shirts and seven pairs of socks. Choosing an outfit, he’s ready to conquer Monday. Maybe he’ll bum a punch off one of his friends for dinner, or make his signature ramen with tangy Sriracha and a whisked egg in it — but all of those thoughts come to a halt.

Garant, a junior English major, is one of the roughly 1.4 million Americans who identifies as transgender. He’s also genderqueer, meaning he doesn’t subscribe to conventional gender roles. Still in the early days of his transition, he’s taking testosterone shots, which leads to this stomach-twisting hunger.

While he’s glad to be on testosterone now, it took longer than he would’ve liked for his parents to approve hormone treatments.

After his freshman year at JMU, he was tired of the length of his dirty blond hair, so he asked his mother for a trim. He wanted it short. Really short.

“What do you want to be, a boy?” his mother responded.

His parents hadn’t thought to ask their child how he identified, and he wasn’t comfortable telling them. They often used the wrong pronouns, called him by his birth name and urged him to keep his identity private.

Garant chose not to live at home this past summer.

“I was going to start to feel trapped in my identity again,” Garant said.

The distance smoothed their relationship a bit and his parents are making strides toward understanding their son. They visit frequently and have more open conversations.

Garant also draws support from his younger brother and his Aunt Rosie, who both check in on him. Aunt Rosie showed her support by purchasing a T-shirt with a gender-inclusive bathroom sign on it.

Gendered bathrooms have been a divisive topic in America lately, and Garant, who has a masculine look but a slender frame, has previously faced his own struggles with restrooms at JMU.

Sitting in class, his bladder’s dull ache sharpened to a jolting pang.

“Why did I bring my water bottle to class today?” he thought. “I knew I was going to be tempted to drink out of it.”

Inside one of the many places on campus without an inclusive bathroom, and with a professor who wouldn’t be happy if he left the building in the middle of class, Garant waited it out.

This is common for the handful of JMU students who are transitioning. They plan bathroom breaks and limit water intake. Salty food is also a no-go because it can ignite a bladder-bursting thirst.

Garant now uses men’s restrooms, and he sports a button on his fanny pack that says “I’ll go with you.” Anybody who is LGBTQ can see the button and ask him to accompany them if they’re uncomfortable going to the bathroom alone, which is one of the many ways Garant is an ally.

“He’s really thoughtful and I think he’s very considerate about everybody’s feelings, especially those relating to sexual and gender orientation,” Ariel Kennedy, Garant’s roommate and a junior justice studies and intelligence analysis double major, said. “He’s very concerned about how people view themselves and how they want to be viewed. I think we need more of that.”

Garant channels his experiences into helping others who are in similar situations, which is part of his work as the LGBTQ & Ally Education Program’s education coordinator. Garant is the liaison connecting faculty with the queer student body, meaning whenever administrators want an LGBTQ perspective on topics such as microaggressions or inclusiveness, they go to him.

He also facilitates roughly 60 panels a year on LGBTQ education for dorms, classes and clubs. One of his co-facilitators is the program’s graduate assistant for education and outreach, Cassidy Gonzalez, a first year graduate student in the clinical mental health counseling program.

“He’s a very professional person and hardworking and focused, but he also has this ability to connect with others and interact with others through his mannerisms in a way that fosters good relationships,” Gonzalez said. “He just cracks me up.”

While Garant loves his work, his position of authority hinders his love life. His attraction to multiple genders fluctuates, but he describes his current dating life as “kind of nonexistent.”

“I feel like people ... come to me with any question they may have and I can point them to the correct resource, but people can’t come up to me and just hang out,” Garant said. “Underneath I’m a bumbling dork.”

Even though Garant doesn’t currently have a romantic life, he’s always emotionally engaged as the “dad” of his friend group.

He can often be seen with his leg crossed over his knee, wearing a baseball cap and cracking corny jokes.

“Bad jokes are a running theme in my existence,” Garant said. “Punning straight out the womb.”

While Garant jokes that his fatherly advice is often “unsolicited and unappreciated,” he wants people who are contemplating a transition to consider one thing.

“You’re going to get to a point where you realize it’s in your hands,” Garant said. “When you get to that point it’s hard, but it’s the most freeing thing you can feel.”