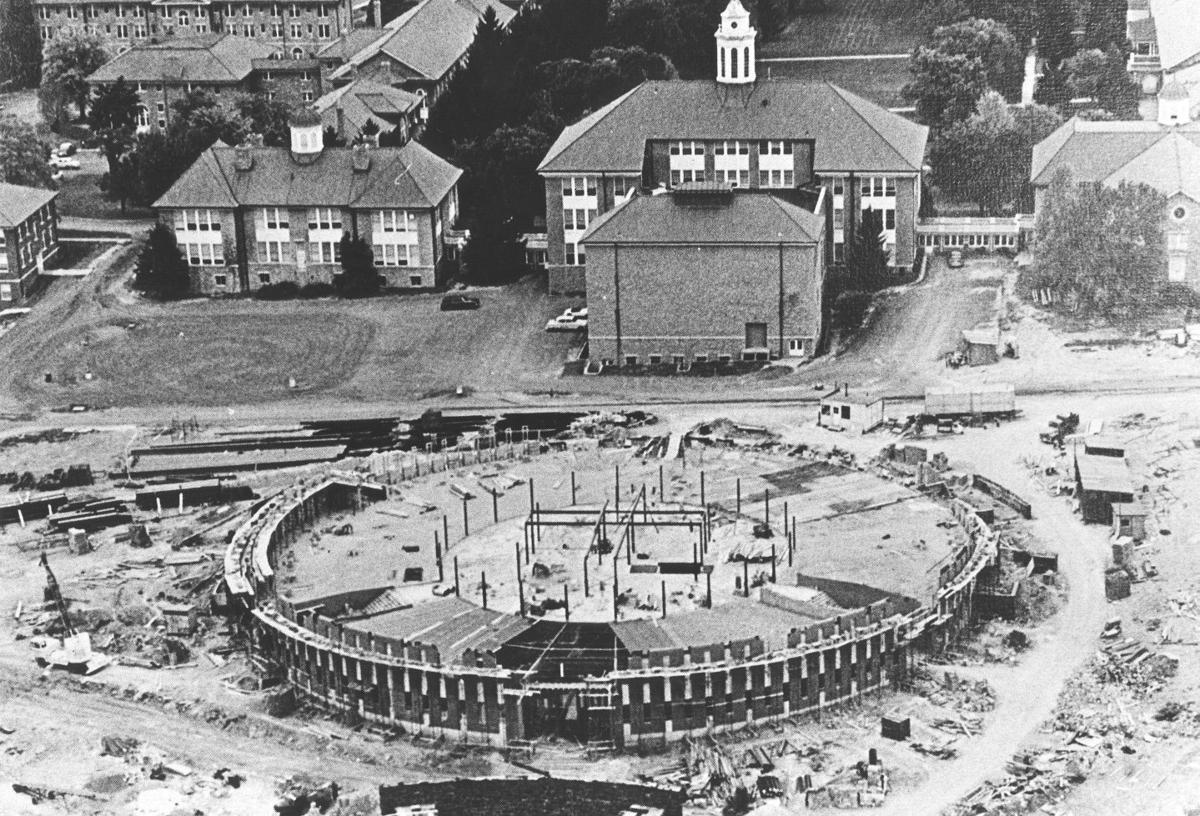 Construction of Gibbons Hall was first announced in December 1962. The building opened on June 15, 1964. D-Hall will be temporarily replaced as D-Hub until the updated D-Hall is built. 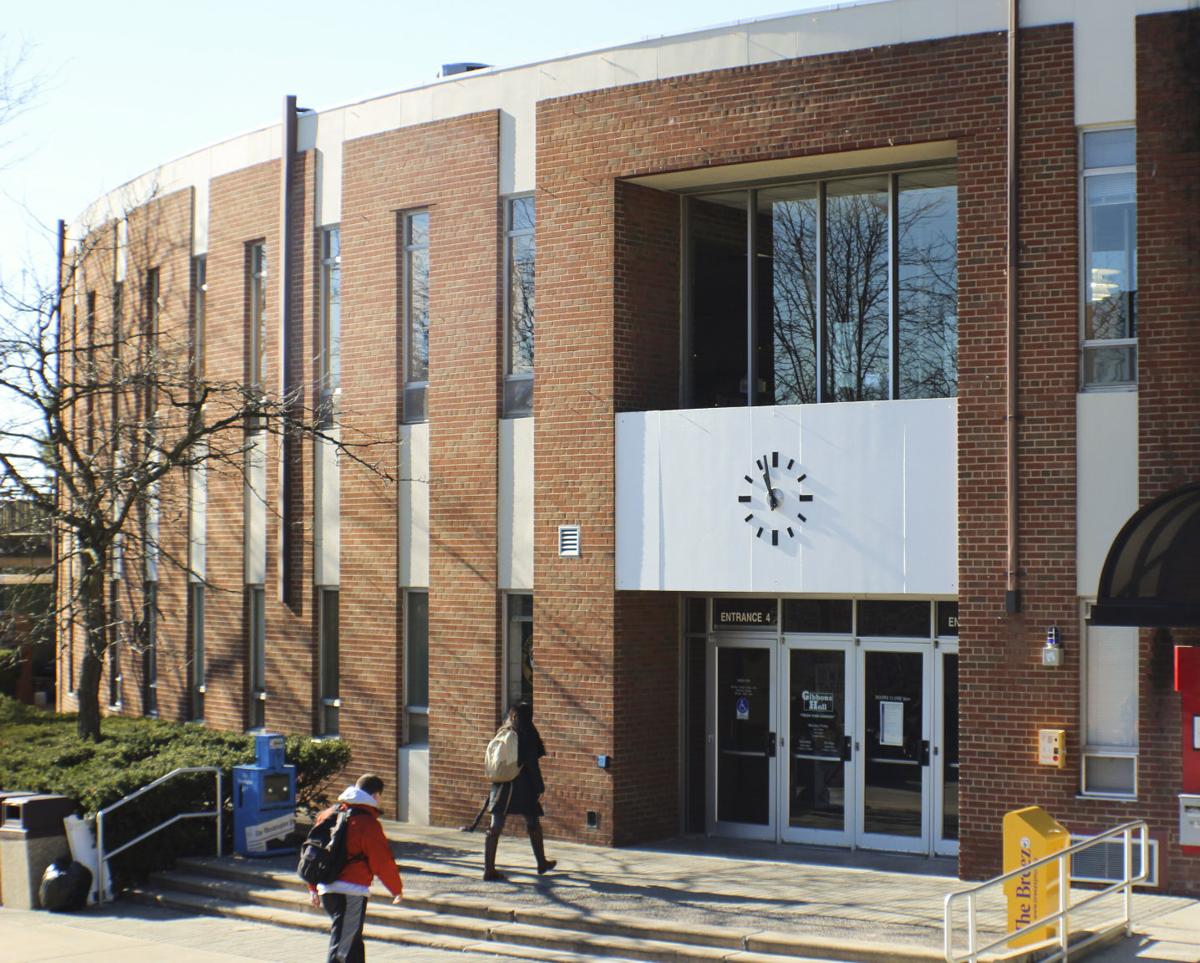 Construction of Gibbons Hall was first announced in December 1962. The building opened on June 15, 1964. D-Hall will be temporarily replaced as D-Hub until the updated D-Hall is built.

The doors open and your mouth starts to water as the smell of buffalo sauce fills your nose; buffalo mash is being served up at D-Hall today, and you take the stairs two at a time so you can devour a bowl or four. Buffalo mash, one of D-Hall’s most famous dishes, is made of steaming hot mashed potatoes, topped with crispy chicken tenders covered in buffalo sauce and ranch dressing.

The mash is one of many dishes that has drawn JMU students to D-Hall since it opened in June 1964. D-Hall’s circular shape and broad range of dining options have made it a staple on JMU’s campus, but this revered establishment will soon see its final days. Anyone who parks in the R1 parking lot near the Village dorms knows construction for D-Hub has begun. While students may not be thrilled about its effect on parking, they also realize what this change really means — D-Hub will replace D-Hall once Gibbons Hall, the building in which it resides, is torn down in June. Then, in fall 2018, a brand new dining facility will rise where D-Hall stands today.

Danielle Torisky, a dietetics professor at JMU, published the research paper “History of Dining Services at James Madison University” in 2007. The information that Torisky gathered about the evolution of JMU dining created a foundation for a journey through D-Hall’s transformation.

The history of D-Hall begins before Gibbons Hall was even constructed, on Sept. 27, 1909, when the State Normal and Industrial School for Women at Harrisonburg opened. Julian Burruss, the school’s first president, said the focus of the school was the “preparation of teachers and the training of young women to be good homemakers.” Dining took place in current-day Harrison Hall and was very different at the all-girl school of 300 students. Each meal’s attendance was mandatory and the girls had to adhere to a dress code.

During World War I, student dining was affected by rationing. The Notebook, a pre-Breeze publication, published student columns about sugar rations.

“Only aviators and birds will be able to use sugar before long …” writer G.G. wrote in 1918.

Despite these events, the student body grew and there became a need for more dining space. Under President Samuel Duke in 1924, the school was renamed State Teacher’s College at Harrisonburg and then Madison College in 1938. New buildings popped up, including what is now Keezell Hall and a new library. This freed up space in Harrison Hall, moving classrooms and student affairs offices out, and making more room for dining.

During World War II, enrollment rates fluctuated and there was more rationing, which student reporters again poked fun at in The Breeze.

“It’s a bitter world from now on … It surely will be a tasteless world ... Words like, ‘You look real sweet,’ will be considered the purest of flattery,” a columnist wrote in 1942.

Under President Tyler Miller, who began his term in 1949, there were about 1,500 students and the Quad had begun taking shape. Students were already developing their favorite meals and food items on campus. According to Barbara Reeves, a Breeze reporter, the school baked all of its own breads and rolls, making these items campus favorites. Also on the list of favorites was fried chicken and the long-time favorite, grilled cheese.

In December 1962, the school announced plans to build what’s now known as D-Hall. The building opened on June 15, 1964, and was an instant hit. Besides a snack bar, D-Hall was the only dining option on campus. Lines of students waited to enter the building at every meal, ready to inhale their favorite dishes.

“As a student, I ate most of my meals at D-Hall,” Dolly Lawson, a 1973 graduate from Madison College and now the director of vending services, said. Her D-Hall favorites were the special meals for Thanksgiving and Christmas. Since 1981, when she started working at JMU, her list of favorites has grown to include chicken and wild rice soup and French silk pie.

According to Dining Services marketing information provided by Lawson, the new D-Hall will include options like Chick-fil-A, Steak ’n Shake and Qdoba Mexican Grill on the first floor. An all-you-can-eat D-Hall with 1,000 seats will be on the second floor. The third floor will have space for banquets, similar to the upper floor of E-Hall.

If you can’t eat enough peanut butter pie, scarf down enough buffalo mash or catch your last Cheesy Thursday before D-Hall closes its doors, D-Hub is planning to serve many of these long-standing campus favorites. The reign of D-Hall may be coming to a close, but its traditions and memories look to live on.