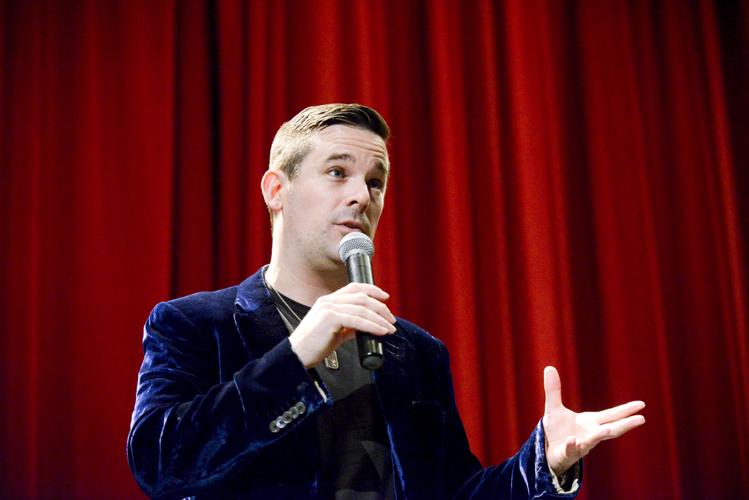 David Hall is from Boston and was certifiably trained in hypnosis at the Stage Hypnosis Center in Las Vegas. 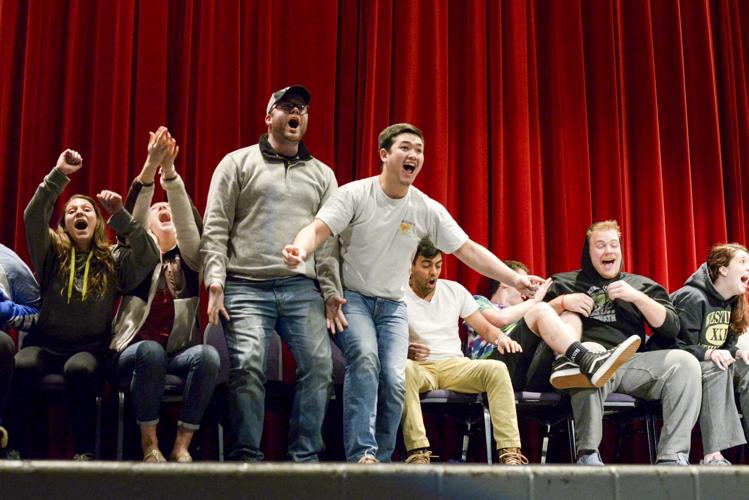 Around 130 Dukes flooded Grafton Hall on Sunday with their friends in hopes to see someone they know get hypnotized. 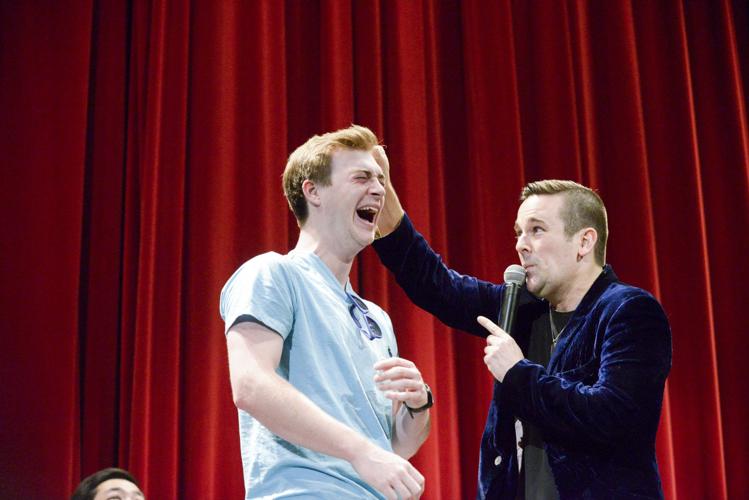 David Hall has performed hypnosis as well as magic shows around the country for over 10 years.

David Hall is from Boston and was certifiably trained in hypnosis at the Stage Hypnosis Center in Las Vegas.

Around 130 Dukes flooded Grafton Hall on Sunday with their friends in hopes to see someone they know get hypnotized.

David Hall has performed hypnosis as well as magic shows around the country for over 10 years.

With one snap of the finger, you’re jolted awake. You have a vague recollection of coming to the show, but what are you doing on stage? And why do you remember seeing your friend’s wife naked?

For Levi May, this isn’t just a hypothetical situation, this is reality. He participated in the hypnosis show held last Sunday at Grafton-Stovall Theatre. Famous hypnotist David Hall brought his hypnotic induction techniques along with gut-busting comedy to life.

“I feel incredibly rested; apparently I did a lot of crazy things I didn't know about,” May, a  JMU admissions counselor and 2012 alumnus, said. “I recall seeing my buddy’s wife naked, it was quite a scene. But then he reversed it, so everyone saw me naked.”

Hall is from Boston and was certifiably trained in hypnosis at the Stage Hypnosis Center in Las Vegas. He’s performed hypnosis as well as  magic shows around the country for over 10 years.

Around 130 Dukes flooded Grafton with their friends in hopes to see someone they know get hypnotized. When they saw their peers on stage, between believing they were naked and then thinking they’d just won the lottery, the crowd’s laughter never ceased.

“I loved the lottery winning that's my favorite,” said Sarah Kiegel, director of Spirit and Traditions at University Programs Board and a senior elementary education major. “That was so funny at the other show too, so I was so excited about it.”

Kiegel, along with other members of UPB, attended the National Association of Campus Activities conference in Chattanooga, Tennessee, where they saw one of Hall’s showcases. During the performance, he convinced the hypnotized audience members they’d just won the lottery; their reactions were priceless. She enjoyed his show and later contacted him about performing here at JMU.

However, there are still skeptics who question the validity of it all.

“Hypnosis is not magic, it is a natural state of mind, a natural trance state,” Hall said. “So, it may appear that people on stage are doing some kind of magic or acting and they very well can be acting within their self conscious.”

He then gave an example to help clear up any skepticism.

“Subconscious reaction is very similar to when you put your foot on the brake when you come to a stop sign,” Hall said. “You don't think about that, that is just something that naturally happens.”

Furthermore, he explained that if you ask an audience member to start doing something that they don't want to do, such as backflips, they still have free will. This means, their subconscious mind can still object. But for one audience member in particular, this wasn’t the case.

“I do remember one show during a dancing portion, one guy started doing backflips and I was like ‘No, no, no, no backflips, no backflips,”’ Hall said.

However, yesterday's show was backflip- free. Instead, the audience was entertained by performances of Beyonce’s “Single Ladies” and the “Nae Nae” given by hypnotized Dukes.

Audience members were teary eyed and hunched over from laughing so hard at the end of each act.

In one act, a participant thought she saw Justin Bieber in the audience and excitedly rushed over and took a picture with “him,” who really turned out to be some random blonde girl; this left the crowd roaring with laughter.

In another one of Hall’s shows, he saw a grown man flying around on stage pretending he was a fighter jet.

“I get surprised on stage all the time because I enjoy watching the show. Every show is a little different, you just never know what they are going to do.”