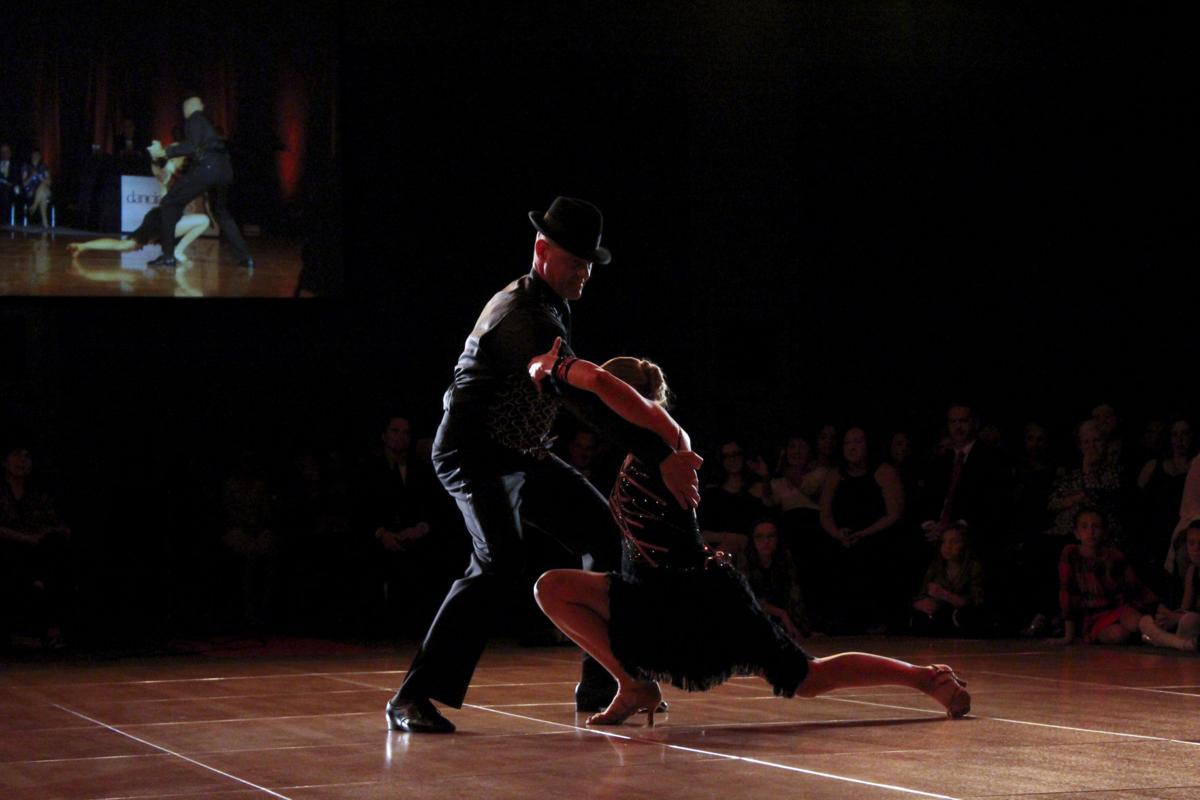 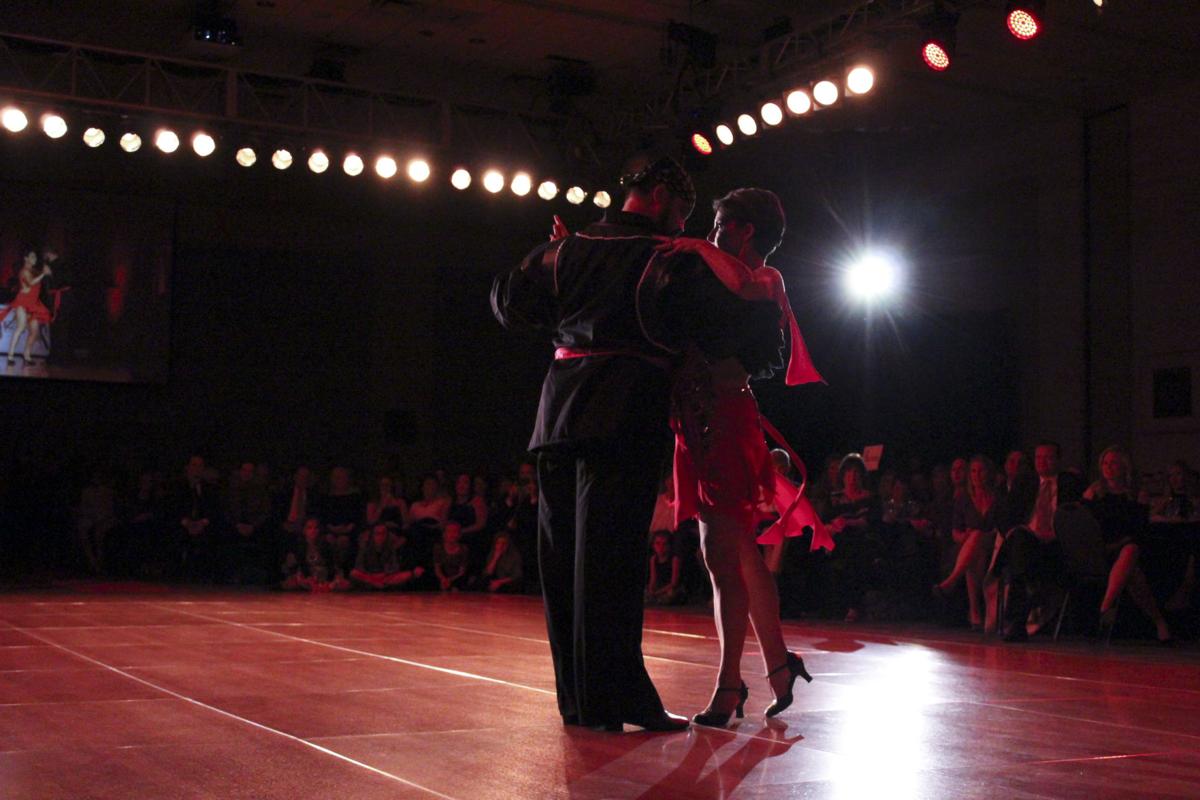 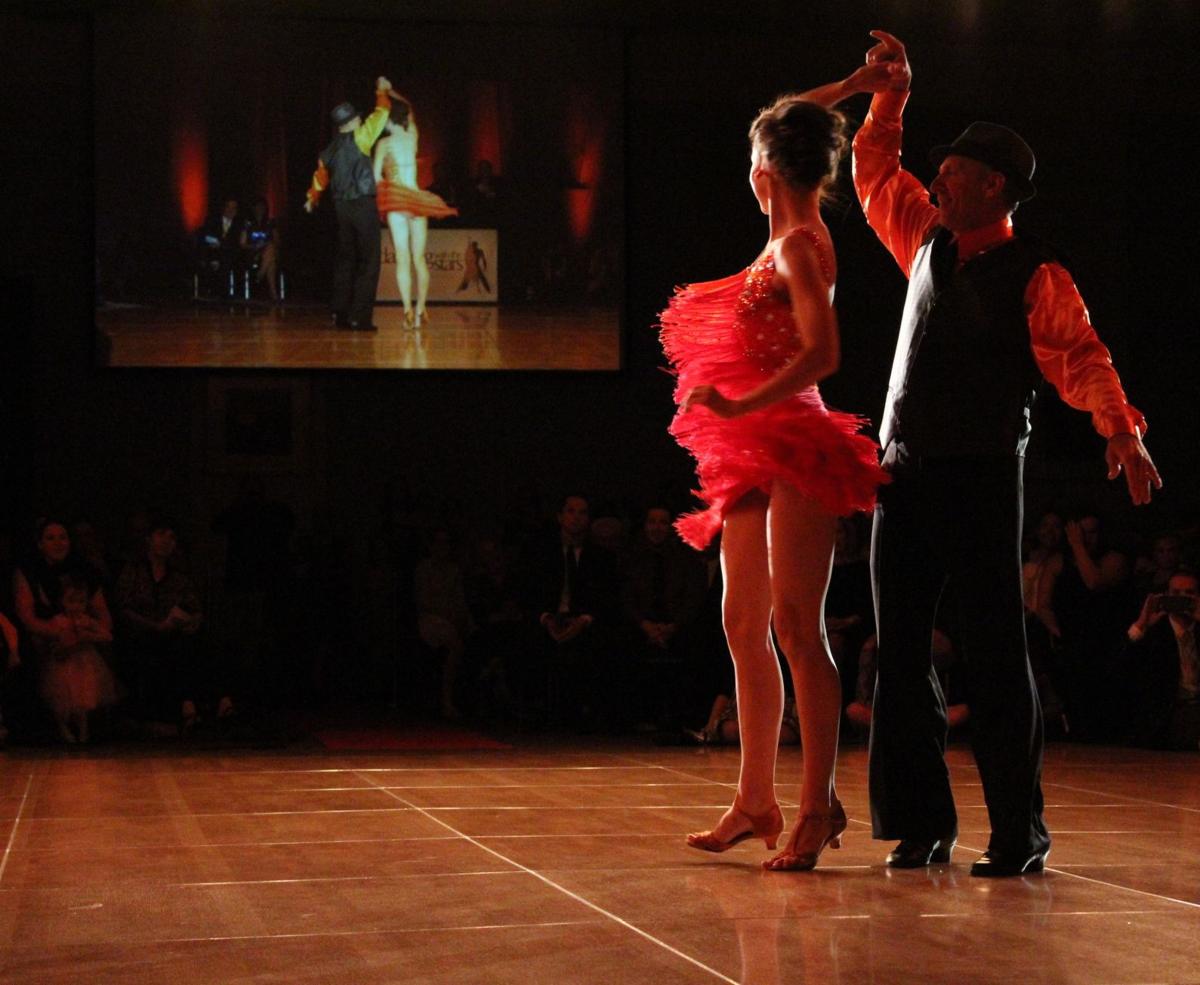 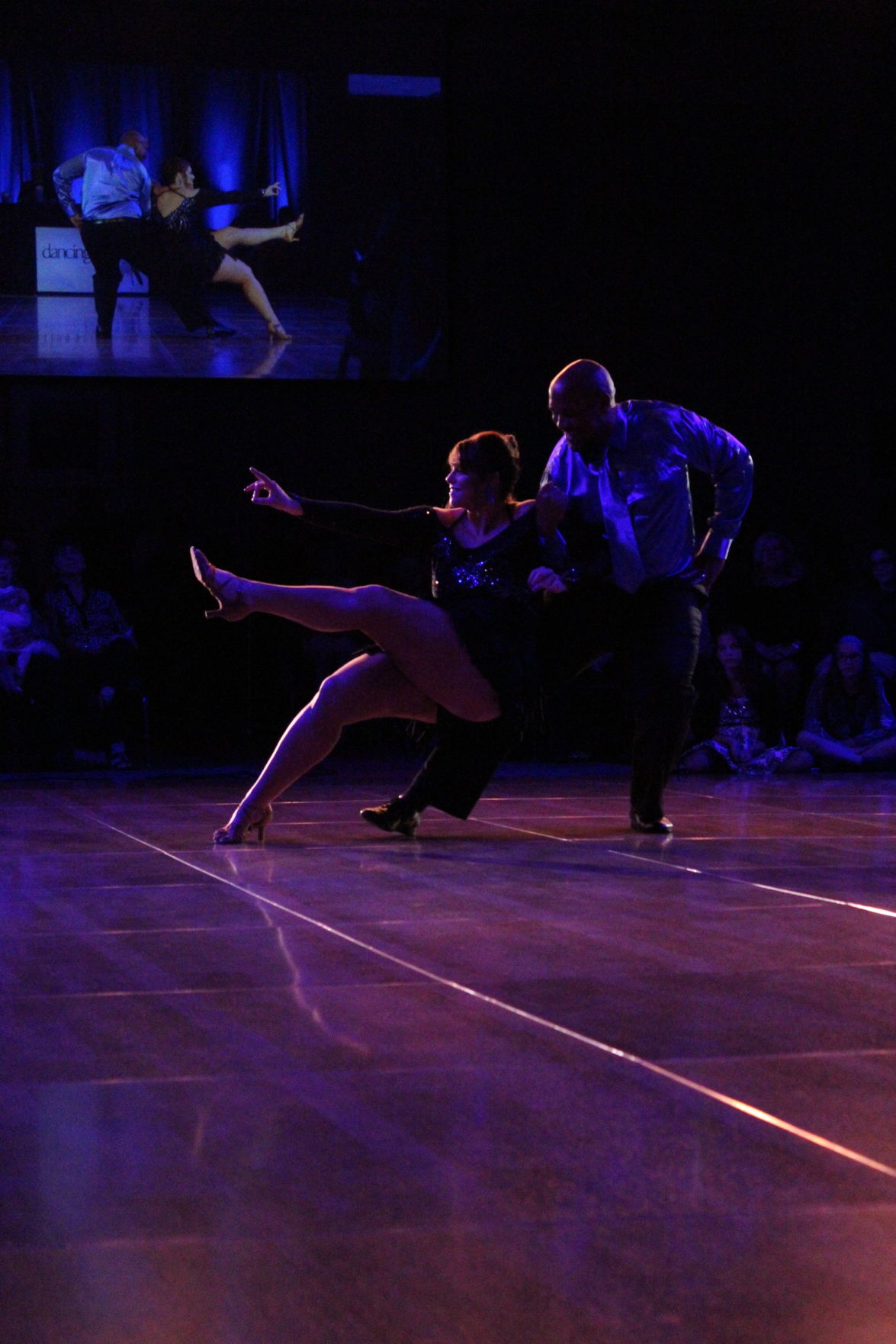 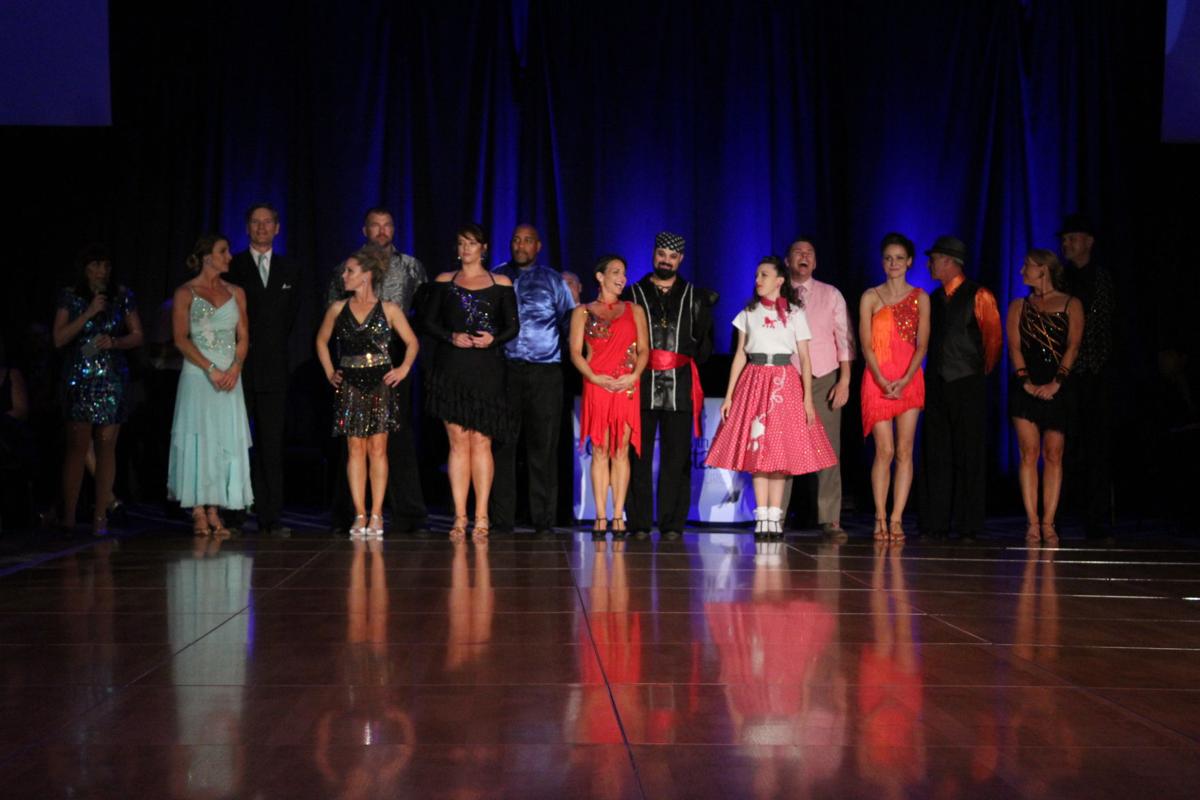 As twinkling disco lights mesmerize the audience, local singer Kelly May Brown croons a Lee Ann Womack favorite, “I Hope You Dance,” to all attendees, dressed in a sparkling ball gown.

And dance, they did. Read below for all the highlights of the seventh annual Dancing with the Stars of the ’Burg, held in Festival Ballroom on Sunday night. Seven teams of amateur dancers from USA Dance and prominent community members or ‘stars’ competed not only in ballroom dance, but also to raise money for the Harrisonburg-Rockingham Child Day Care Center. The total amount raised at this year’s event for the H-RCDCC amounted to $125,090, a new record.

Team Frampton from 2015, Before the Competition Began:

WHSV reporter Channing Frampton competed with USA Dance partner Libbi Fitzgerald in Dancing with the Stars of the ’Burg 2015. On the day of the competition, Fitzgerald fell during rehearsal and injured her arm, forcing the team to show a video of their routine from an earlier practice date instead of giving a live performance. At the beginning of the competition this year, Frampton and Fitzgerald performed their dance live in front of the audience, something they weren’t able to do last year.

Kate Martin of Harrisonburg Radio Group danced the bachata with Adriel Byrd of USA Dance to get the night started. Set to a Latin version of “Stand By Me,” the dancers earned a score of 24 points out of 30.

“Honey, you can bring home the bacon and you can fry it too,” Donna Arehart, one of the three judges, said to Martin following the performance.

Justin Nolen, dancing on behalf of Sentara Rockingham Memorial Hospital Orthopedics, teamed up with partner Denise Dean Shifflett to dance the paso doble. Heavily influenced by flamenco, they performed the dance complete with chains and Nolen in a pirate costume.

“I think he may have been channeling Jack Sparrow,” Bob Corso, anchor for WHSV-TV and the host of the competition, said. The judges awarded Team Nolen 26 points.

Dixie Garber, co-owner of CrossFit Harrisonburg, danced the quick step with her USA Dance partner Greg Riddle (fun fact: Riddle is the only person to have competed in all seven seasons of Dancing with the Stars of the ’Burg). The duo performed Ne-Yo’s cover of “Friend Like Me,” originally from the movie “Aladdin.”

“It’s bouncy, it’s jazzy, it makes you want to get up and do something,” Riddle said, describing the dance. The team earned 23 points.

Harrisonburg City School Board Chair Kerri Wilson performed the Argentine tango with her partner Don Barstow, a first-time participant. This type of dance is used in the movie “Mr. and Mrs. Smith,” starring Angelina Jolie and Brad Pitt. Although the dance is supposed to be serious, Wilson said she found it difficult to keep a straight face because she was having so much fun.

“I’ve never danced before in any capacity,” Wilson said. “Dancing is a lot harder than I ever anticipated.” The judges gave the pair a score of 24 points.

Andy Vanhook from Appeal Production Video and Megan Sullivan from USA Dance performed the foxtrot to the song “Pink Shoelaces,” a song from 1959 about crazy dressers. Vanhook dressed the part, wearing shoes to go with the song’s namesake, and matched Sullivan’s bright pink poodle skirt iconic of the ’50s era.

“My first feeling was that I was flattered,” Vanhook said about being chosen as a ‘star’ this year. “The other side of it was I was really nervous. Getting the steps with music has been a big part of the process.”

Dr. Mark Warner, senior vice president of student affairs, performed a cha cha version of “Uptown Funk” by Bruno Mars with his USA Dance partner, Emily Marsh. The duo, clad in bright orange attire, earned the first 10 of the night from Arehart. And then another, from judge Gary Chovan.

“Mark, you’re an inspiration to the 40-somethings,” judge Mike Johns said with a chuckle, following their lively performance that earned the highest score of the night up until that point.

“Your students are going to have a great time watching this on YouTube,” Airhart said.

Team Warner was awarded 29 points, one point shy of a perfect overall score.

“Pete has been great,” Fitzgerald said in regard to teaching him the steps to their hustle version of “Can’t Stop the Feeling.” “He actually has a nickname. It’s ‘Shakira.’ His hips don’t lie.”

After the dancers spent 14 weeks of fundraising and nailing down the steps to their respective dances, the night wrapped up with the presentation of the final trophies. Team Martin received the People’s Choice Award, presented to the team that raises the most money at the event, with a record-breaking amount of $33,223. Team Laver was given both the Judge’s Award, since they received the full 30 points after their performance, and the grand prize Mirror Ball Trophy, which is awarded to the team that raises the most money overall and receives the highest marks from judges.

“The real winners are the children of that daycare center,” Corso said. “Both present and future.”