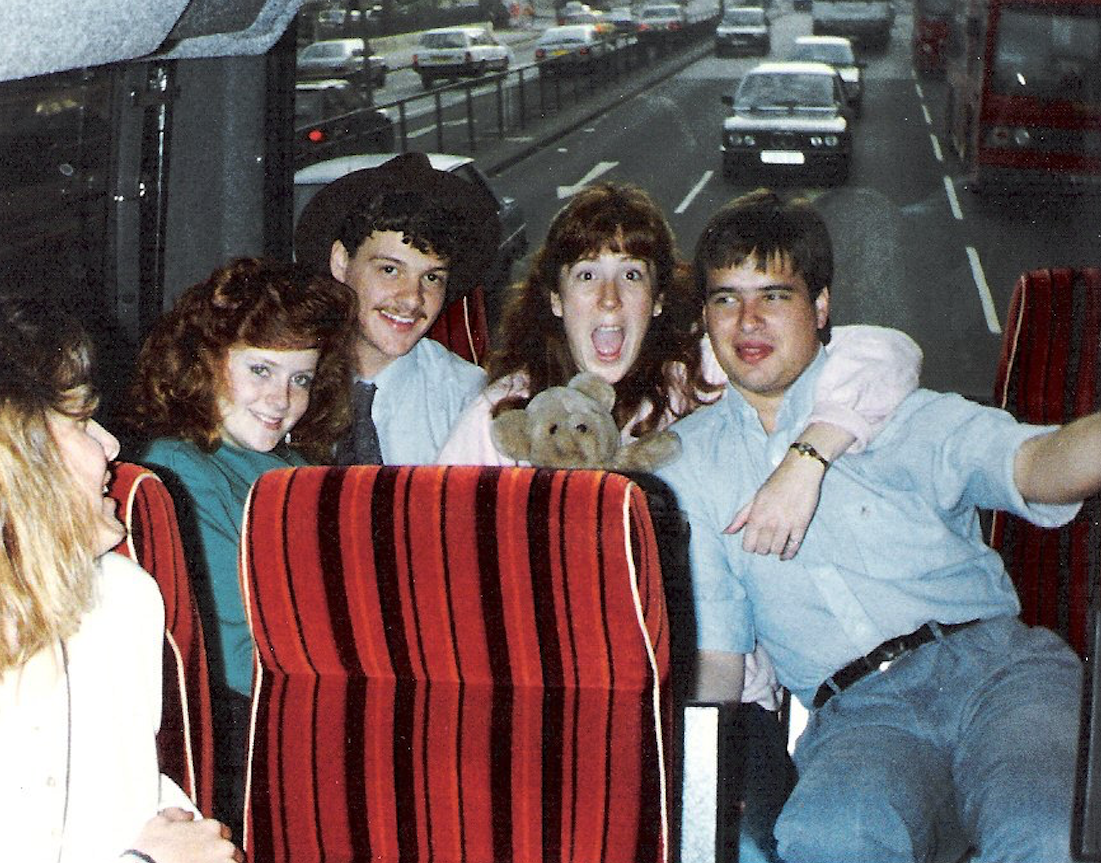 The group's last day in London. This was the bus ride to the airport to go home. Left to right: Stacy Parker Strauser, Brad Phillips, Joyce Forbes, Edgar Tuck. 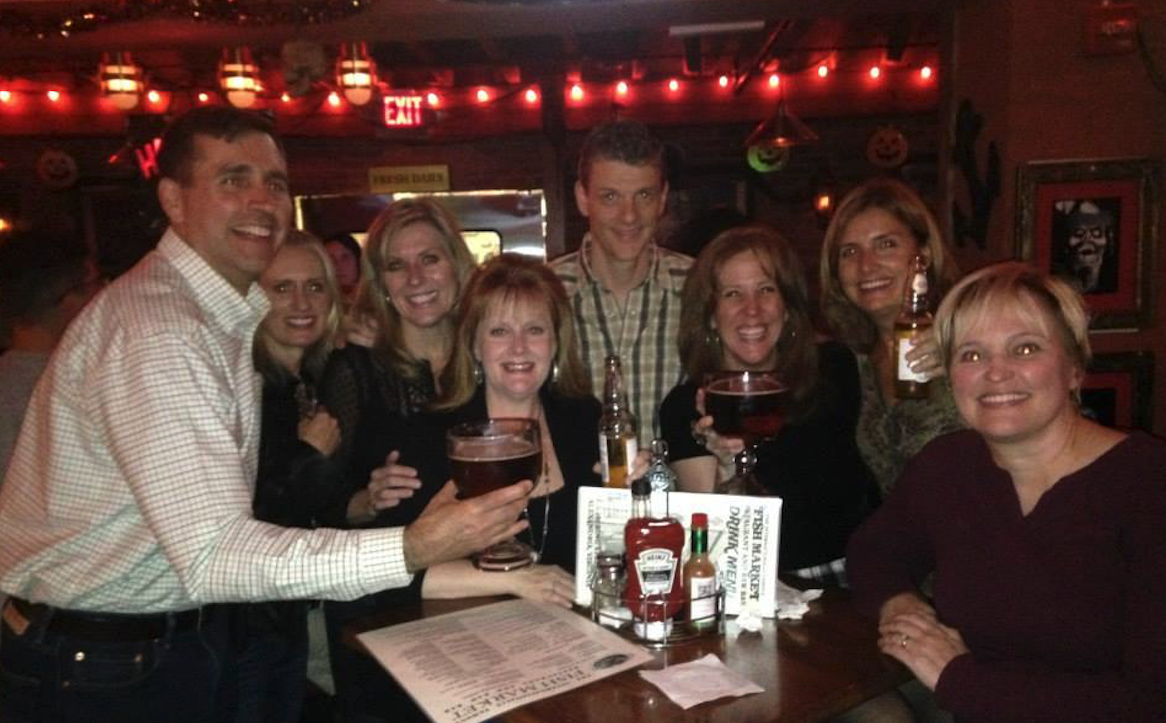 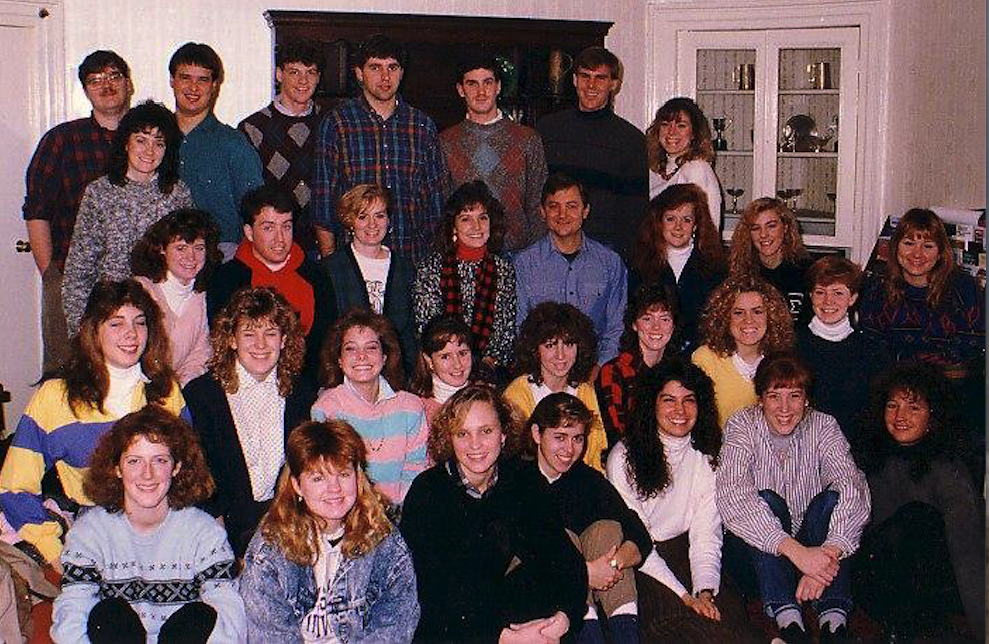 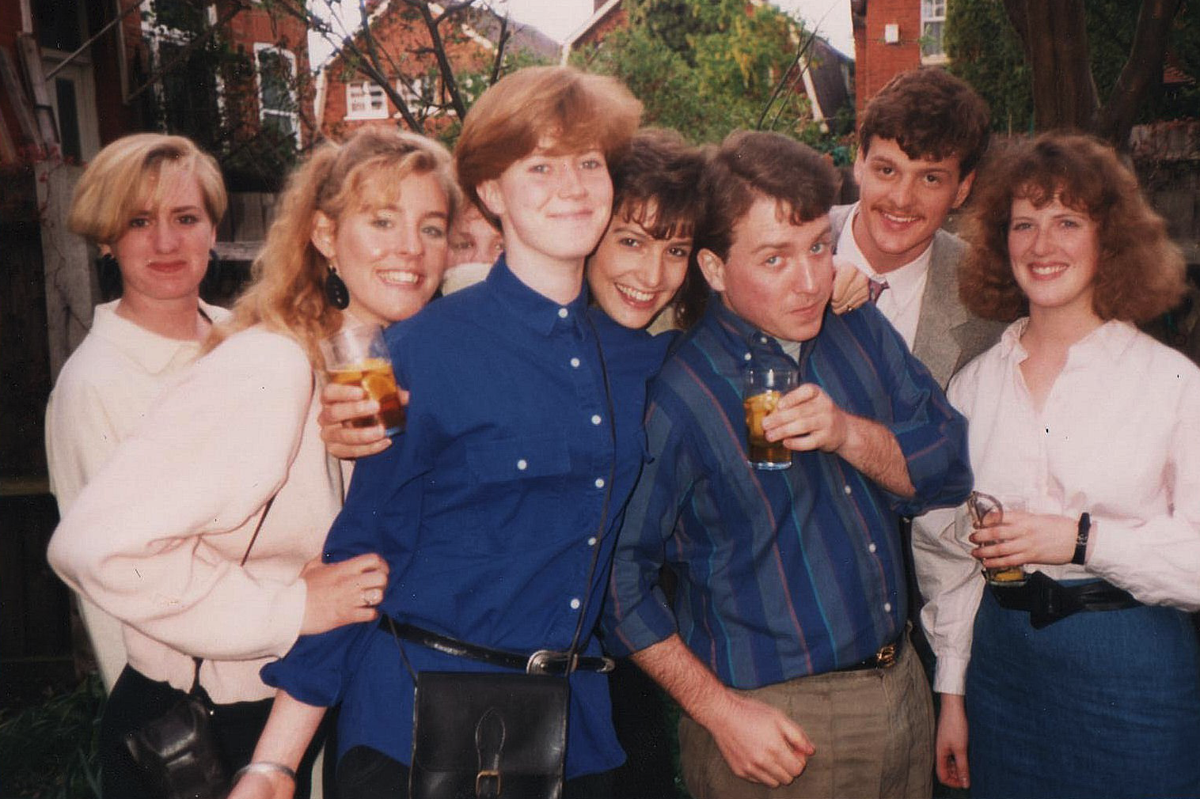 The group poses for a picture in the courtyard of a pub while in London. 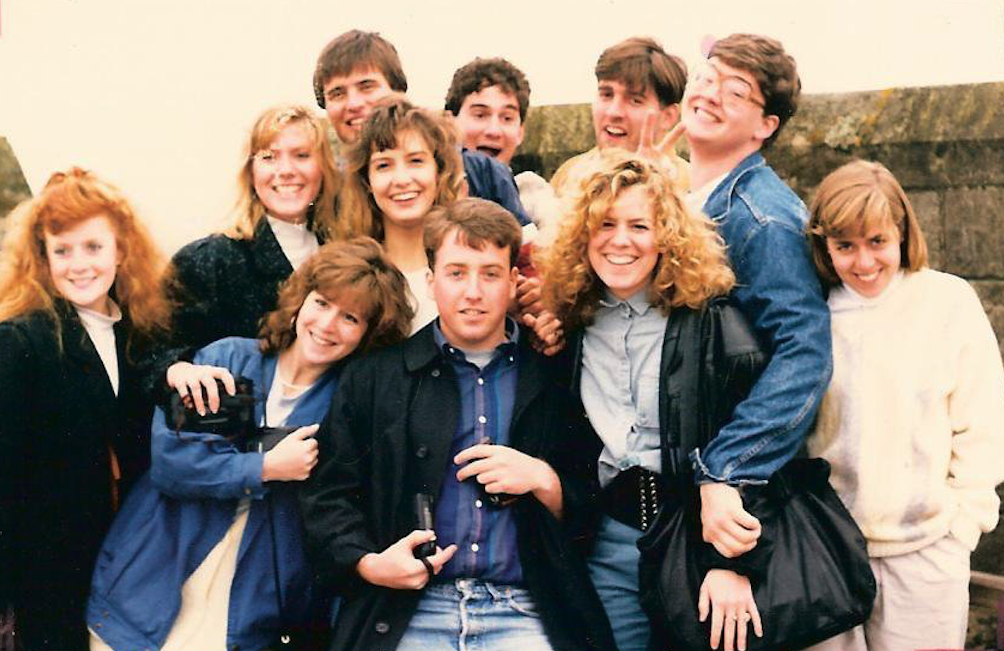 The group atop of a castle while in London. 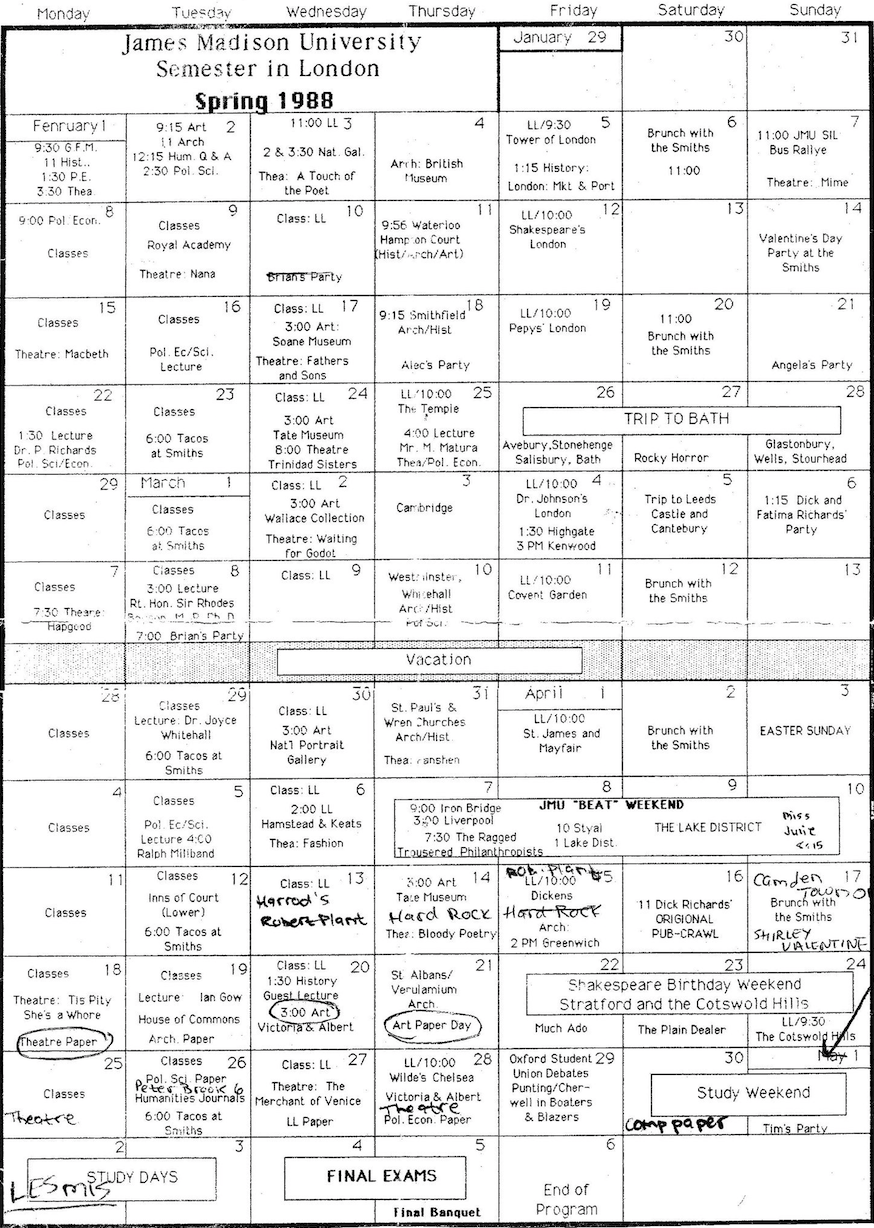 This is the group's itinerary for their London abroad program. 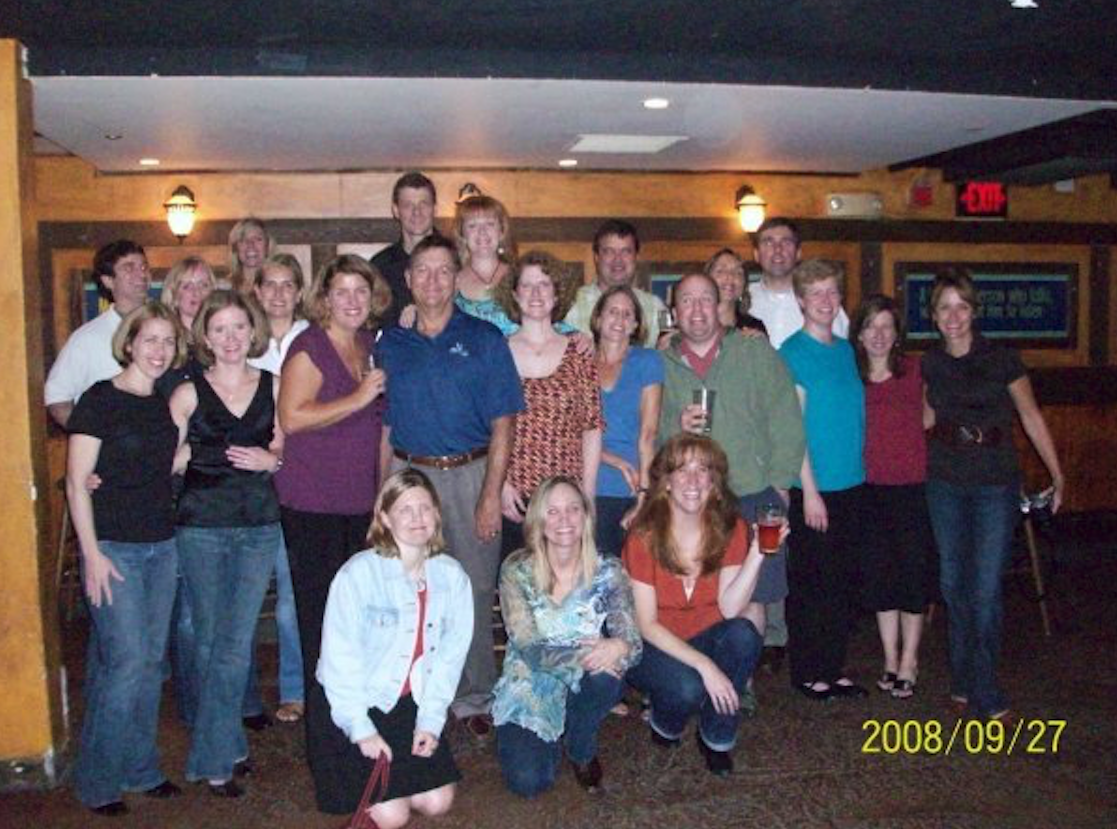 This is the group's 20th get together, their first official reunion.

The group's last day in London. This was the bus ride to the airport to go home. Left to right: Stacy Parker Strauser, Brad Phillips, Joyce Forbes, Edgar Tuck.

The group poses for a picture in the courtyard of a pub while in London.

The group atop of a castle while in London.

This is the group's itinerary for their London abroad program.

This is the group's 20th get together, their first official reunion.

During the spring of 1988, 30 JMU students spent the semester abroad in London, England. The group has kept in touch years later through social media. They’ve relived memories, shared photos with one another, and now, cherish every opportunity they have to see each other.

Saturday kicks off the group’s 30th reunion, where 15 of the original 30 students will return to Harrisonburg to celebrate. The faculty member in residence, Dr. Vardaman Russ Smith, Associate Professor Emeritus of Economics, will reunite with the group as well.

Joyce Peifer Forbes, a 1989 JMU alumna and participant on the London trip, organized the first reunion the group had 10 years ago. The group reconnected on Facebook before 2008 to establish the first official reunion. Now, she helped plan this year’s reunion as a way to spend time bar crawling, catching up and reflecting on how they’ve changed throughout the years.

“The semester in London was the single-most important thing that happened to me in my college career,” Forbes said. “I can’t imagine there would be anybody in the group who wouldn’t say that that semester didn’t change them, and change them for the better. That semester made me a better person, a better student — it helped me get closer to becoming a grown-up and it started a lifetime love affair for me for London.”

Jennifer Werry Stewart, a 1989 JMU alumna and participant on the trip, agrees that being away from home for an extended period of time was eye-opening, but allowed the group to rely on each other.

“We really felt like we were somewhere different because we didn’t have easy ties to home,” Stewart said. “As a result of that, the group relied on each other. We were each other’s family while we were there.”

However, communication with family and friends back home was difficult. The group sent letters and used one payphone to make short phone calls. Stewart found that she saved over 50 letters from friends and family over the course of the semester. Despite communication difficulties, she wouldn’t trade her semester for the world.

“When you’re always in the same place, you get used to perspectives and ideas,” Stewart said. “Sometimes, you have to get out of that place to see things differently. You feel part of the bigger world.”

Thirty years ago, the group of students were not close friends. Despite spending a great amount of time together, they formed many sub-groups. The group as a whole didn’t have any major conflicts, but didn’t fully take the time to get to know one another.

Stewart and Forbes both agreed that the biggest surprise exists today — the group is closer now than ever before. Through Facebook, they’ve had the opportunity to keep in touch with everyone.

Within the group, 23 alumni are active and still keep in touch with one another. The other alumni are either inactive, or not involved with the group on Facebook.

“It’s not always about reflecting on London,” Forbes said. “Obviously, there’s that element because we shared this intense experience together, but we don’t get together just to regail about our past. But it’s also to have quality time. It’s tremendously satisfying to enjoy their company now more than I did 30 years ago.”

Smith coordinated the abroad program 30 years ago and looks forward to reconnecting with his students at each reunion. While he went on the London trip twice during his time at JMU, he says the connection with the 1988 group was special from the start. Right away, he asked the group to call him by his nickname, Russ.

“He was a team with us — we were all part of the group together and figured out London together,” Stewart said. “His dedication for our group was key to our success, socially and academically.”

Smith learned quickly that the semester was full of experimental-based learning opportunities. Each day was packed with in-class lectures and an outing to pair along with their classes.

This gave students the ability to explore the London culture firsthand. Between writing letters to members of parliament, attending Oxford student union debates and enjoying Liverpool for its rich Beatles history — each day was filled with something new and rewarding.

“For me, what made the trip abroad worthwhile was the capacity to tie things in,” Smith said. “It’s hard to describe how rich in experience it is to live in a culture where regular citizens read often and are well-informed. We were in a wonderful place in a wonderfully stimulating environment, so the way I saw it, we were gonna work hard, but we were gonna play hard, too.”

Before this milestone reunion, Smith challenged the group to write a few words to share on what the semester in London means to each of them 30 years later.

“This is why this reunion is so sweet — we weren’t all friends,” Forbes said. “London ended up being a major impact on my life, and I’m ever-so thankful for it.”

In return, Smith shared how the original London trip impacted his life as well.

“I never worked harder, or found any of my other experiences at JMU more rewarding, than the two tours of duty I did in London,” Smith said. “And I was privileged to have been selected as one of the recipients of the distinguished teacher award — and I think the work I did in London was prominent in that selection. It was quite an honor.”