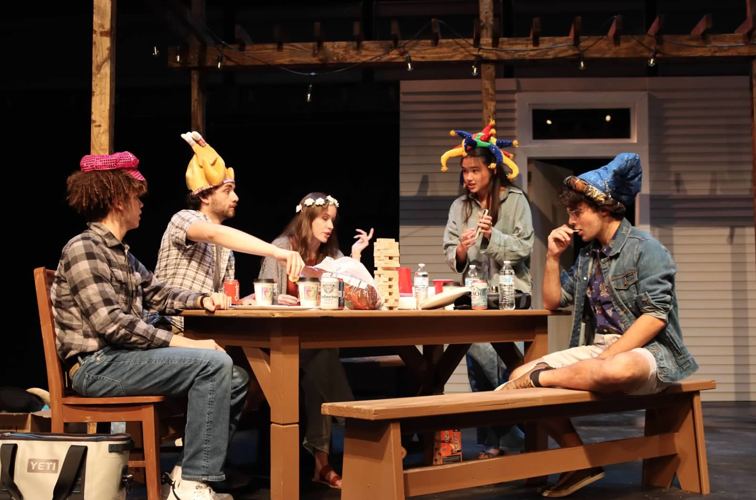 "The House on Linardi Street" follows five siblings on a lake house weekend as they debate their inheritance, relive childhood memories and ultimately grow closer. 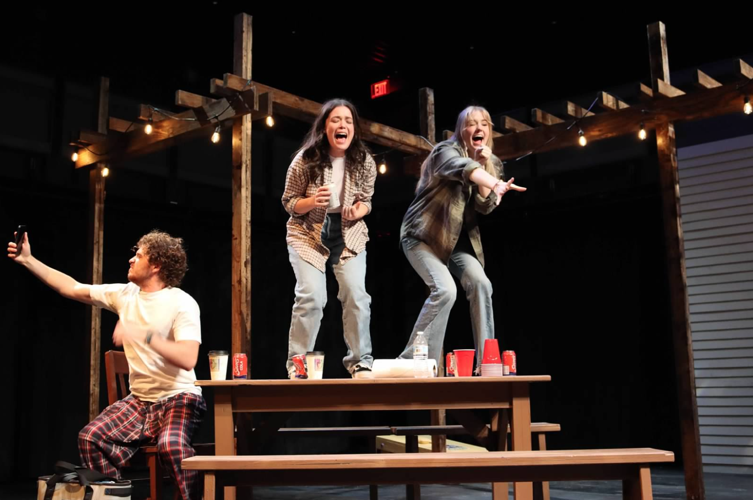 Standout moments from "The House on Linardi Street" include scenes when the cast breaks into song and belts out tunes like "Piano Man" and "Love Shack."

"The House on Linardi Street" follows five siblings on a lake house weekend as they debate their inheritance, relive childhood memories and ultimately grow closer.

Standout moments from "The House on Linardi Street" include scenes when the cast breaks into song and belts out tunes like "Piano Man" and "Love Shack."

Turning back to the table accompanied by his siblings, Benny, played by Mitch Glaes, danced his fingertips across the prop and released an emphatic performance of “Piano Man” by Billy Joel. Despite the tense atmosphere, the rest of the young adult characters began to fall into song and dance alongside their brother.

This performance, conducted by the awkward character, sliced deeply into the silence of the theatrical beat and sparked life across the stage. From this display, audiences can fall into feelings of awe, embarrassment and familiarity — the basis of which “The House On Linardi Street” is written.

Premiering in the Studio Theatre at The Forbes Center for the Performing Arts, the production is a 90-minute act written by senior theatre major and playwright, Juleanna Green. Performances occurred Nov. 8-12 and were directed by junior theatre major, Becca Stehle, a long-time collaborator of the playwright, Green said.

The play’s set during a summer weekend at the five siblings’ family home and centers around their decision of the property's inheritance. Despite conflict rooted in the play’s plot, domestic love is the strengthening theme that intertwines the audience with the story. As the narrative moves forward, it beckons for viewers to adopt the relatable characters and contemplate their own family’s relationships.

The setting of the Studio Theatre can be attributed to the box-theatre design, which allows the configuration of floor space and seating. Upon entering the theatre, the audience is met with the familiar sight of JMU cornhole boards, a looming light fixture, coolers and other backyard amenities.

Pete, played by Gavin Kiley, is the first character introduced to the audience. The son displays the persona of a flannel-wearing, beer-drinking man who insists the house must be shared among the siblings. Automatically, the audience connects with the values of Pete and empathizes with the character who shows a reflection of the mentioned father.

The audience can further connect with the stories the character shares with his brothers and feel part of every inside joke. Alongside the primary narrative, depictions of stories and other memories are taking place that coincide with the main script. The other set of actors, featuring Campbell Ella and Luke Freisner — a current staff writer for The Breeze — allow viewers to relive the memories along with the primary tellings.

Pete’s brother, Benny, is the ostracized, socially-awkward and utmost entertaining relative many may have. Throughout the show, the character drinks his fill of alcohol and displays a stark contrast to Jack, the third and final brother. The character, played by Nick Moxley, can be seen as a perfectionist and cautious man, who pairs with the inheritance ideals of Cherry, played by Emily Whelen, early on in the story, furthering tenison and division among the siblings.

Cherry, a stern and decided figure, takes on the role of the antagonist for her desire to inherit the entire property. The character provides conflict — an attribute most can relate with in their own families — in the story and is constantly subdued by Liz, played by Camden Gillespie. By Gillespie’s performance, viewers can draw ties between the daughter and her peacemaking mother, which is depicted by the reading of their passed parent’s journal.

Throughout the production, the journal further reveals memories which both aids and strains the inheritance decision of the siblings. Ultimately, the five family members are met with the question: What is more beneficial, holding onto memories or allowing change?

Though viewers may never be met with the same circumstances that are imposed upon the stage family, this universal theme allows for “Linardi Street” to connect personally with its audience as the home connects the siblings. For college-age students, this decision may be more apparent than ever before as we are constantly met with unfamiliarity and challenges.

Paired with this choice is the nostalgia aspect the play triumphantly displays. Not only are the siblings actions driven by nostalgia, but their entire relationships are built upon memories from the home. It’s difficult for viewers to not become familiarized with the characters through the acted memories and reconjure their own from childhood.

Even with familiar theming, the production certainly keeps viewers wondering what happens next. Though limited to a singular setting, Green was able to fully adapt the Studio Theatre stage for multiple progressions, relative characters and idiosyncrasies that only family members would be accustomed to. This provided the audience with offbeat, fantastic displays of acting and writing material.

“Linardi Street” viewers are ultimately met with every extent of emotions, from multiple, hysterical acts of song and dance, commanding arguments full of harsh words and the ultimate reconciliation among siblings. Viewers carry the weight of love, nostalgia and decision-making along with the characters long after the show’s closing.

After the lights spread across the stage’s fixture dim, the audience can also feel a loss for their new extension of family. The production’s return, however, is hopeful, Green said, who plans to upload the performance to New Play Exchange, a digital script library. In the near future, audiences may be able to rejoin the Linardi House’s family story and again become mindful of their own.

CORRECTION (11/16/22, 9:00 p.m.): The original version of this article misspelled Becca Stehle's name and did not give proper photo credits to Sophie DiFrancesco. The current version has been updated with the correct spelling and photo credit.

"The Lightning Thief: The Percy Jackson Musical" was the first theater production to take place at the Forbes Center for the Performing Arts this semester. Produced by Stratford Players, a student-run performance organization, the show only had a month before it was performed to a sold-out crowd. Bigger themes of dealing with COVID-19 among other student life struggles are prevalent in the show.

You may see the Dukettes dancing in Bridgeforth Stadium or the Atlantic Union Bank Center, but they're rising in status as a top-tier collegiate dance team. In addition to performing at JMU football and basketball games, the Dukettes dance competitively in events like the National Dance Alliance’s annual National Collegiate Dance Championship.

Rihanna's latest single, "Lift Me Up," is her first new music in six years and part of the soundtrack for the upcoming film "Black Panther: Wakanda Forever." Reviewer Gracie Brogowski writes that the song is "raw and genuine" — an emotional tune that reflects the themes of the new Marvel movie.

With the release of her 10th studio album, "Midnights," Taylor Swift continues to demonstrate her hold on pop culture and audiences around the world. Culture Editor Avery Goodstine calls the project "a complete surprise" that blends previous eras of Swift's music with a more mature, wiser perspective.

"The House on Linardi Street"

Review | 'And In The Darkness, Hearts Aglow' sets standard for introspection

In his review of Weyes Blood's latest album, Evan Moody writes it's "ere-defining" for the singer-songwriter and shows a new maturity through her vocals and lyrics.

Review | 'She Said' is a powerfully emotional film with exceptional acting

Content Warning: “She Said” and this review discuss the topic of sexual assault.