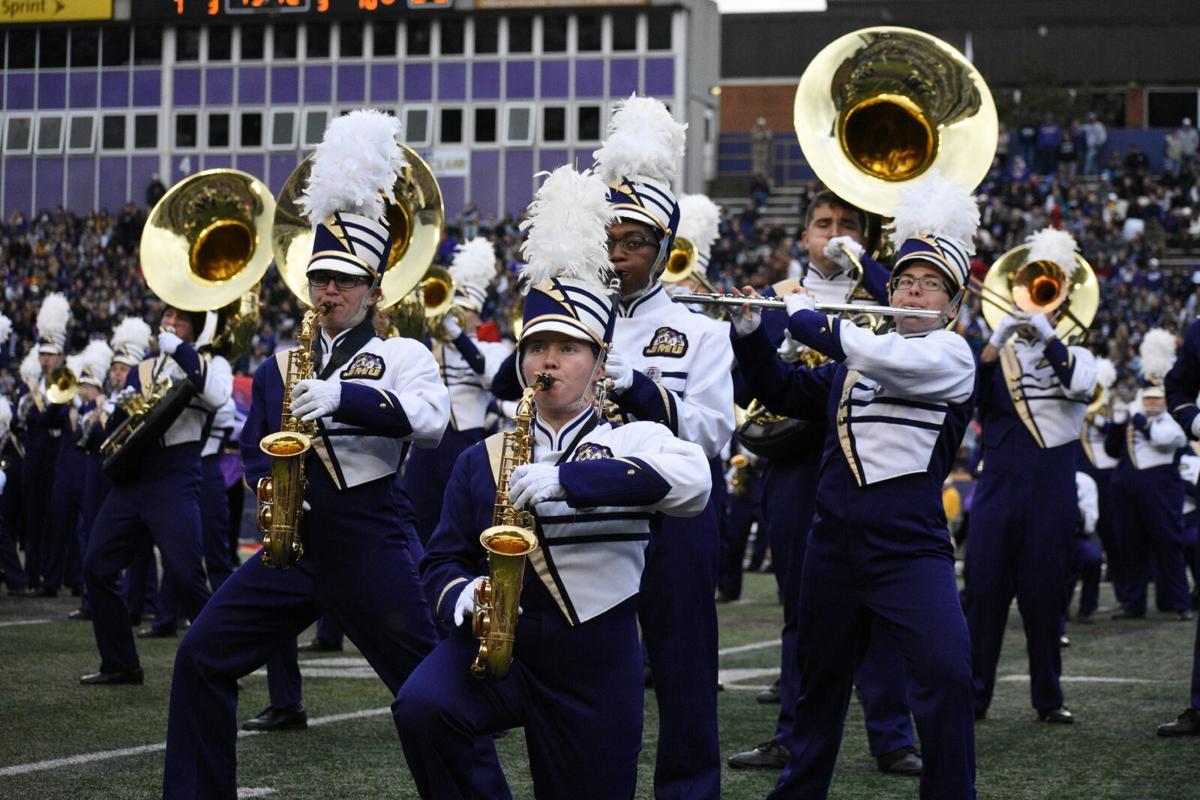 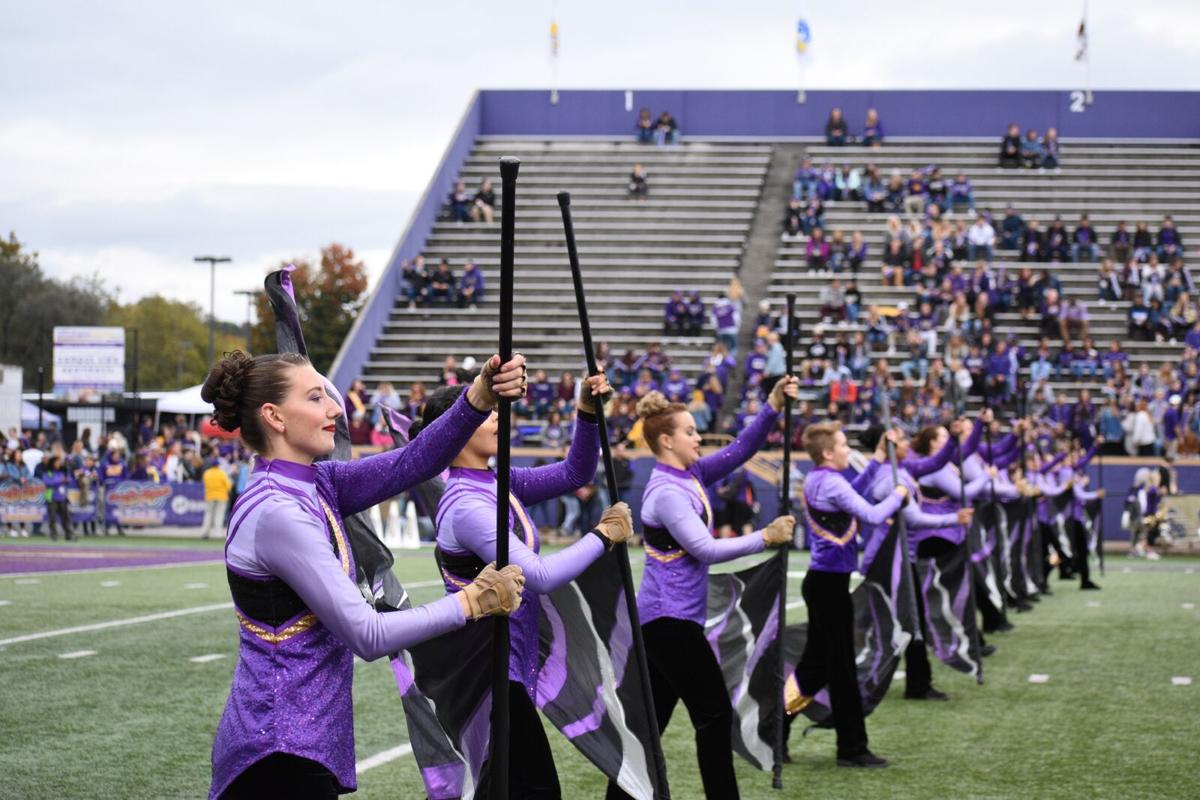 In addition to the 535 MRDs, the Colorguard and Dukettes will also be attending the Macy's Parade. 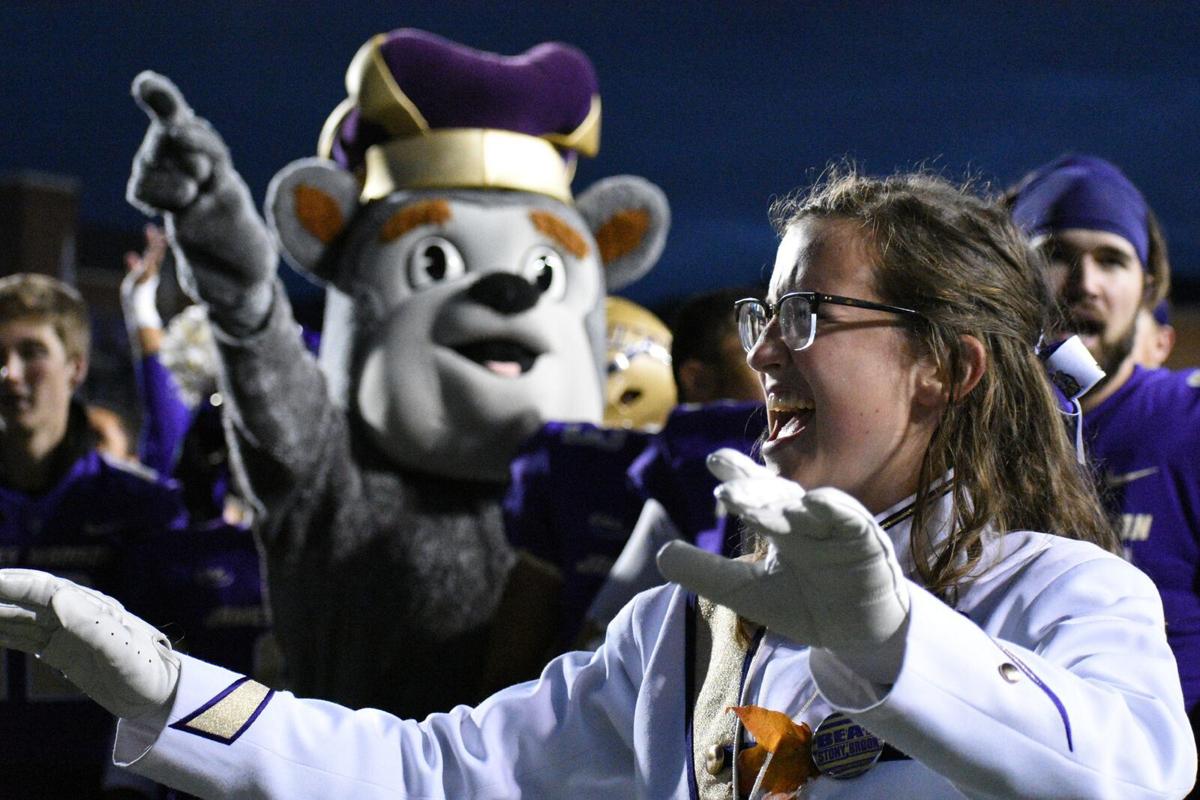 Director of Bands Scott Rikkers says their "Macy's tune" is George Gershwin's "I Got Rhythm." 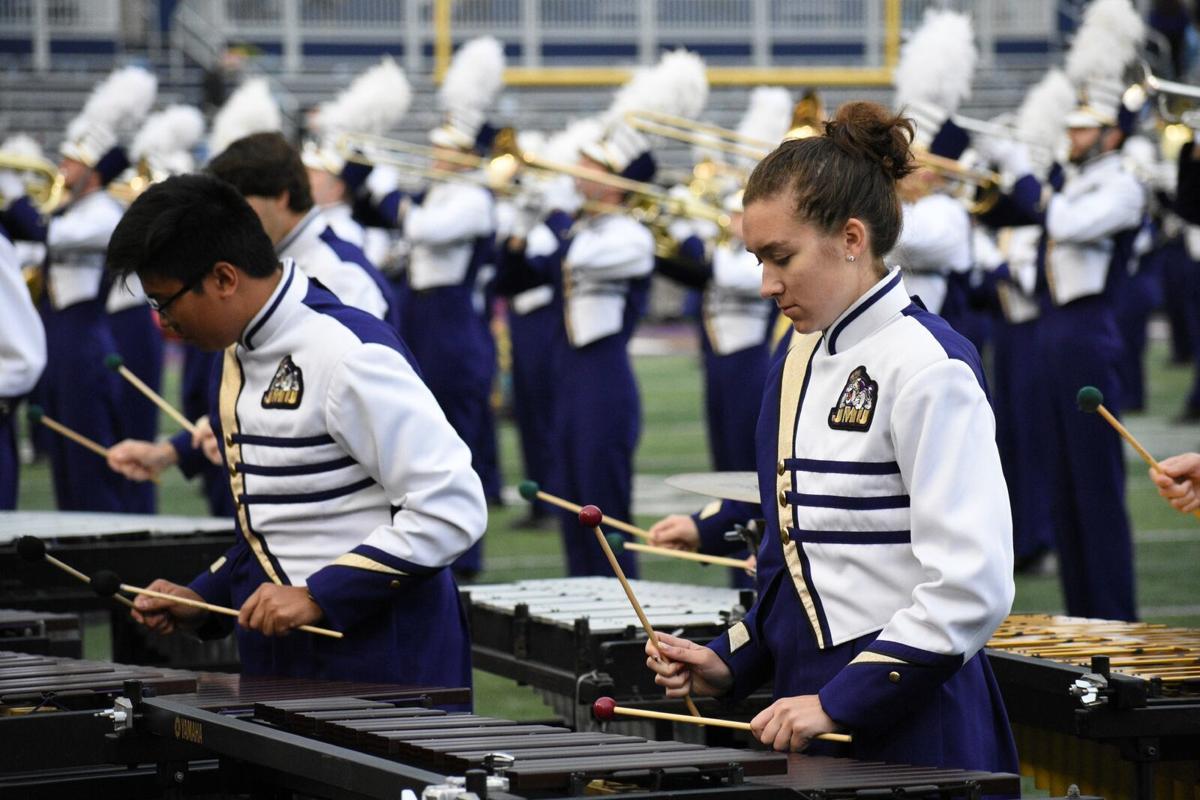 This year's appearance will be the first for most members, who say the opportunity is a "childhood dream come true." 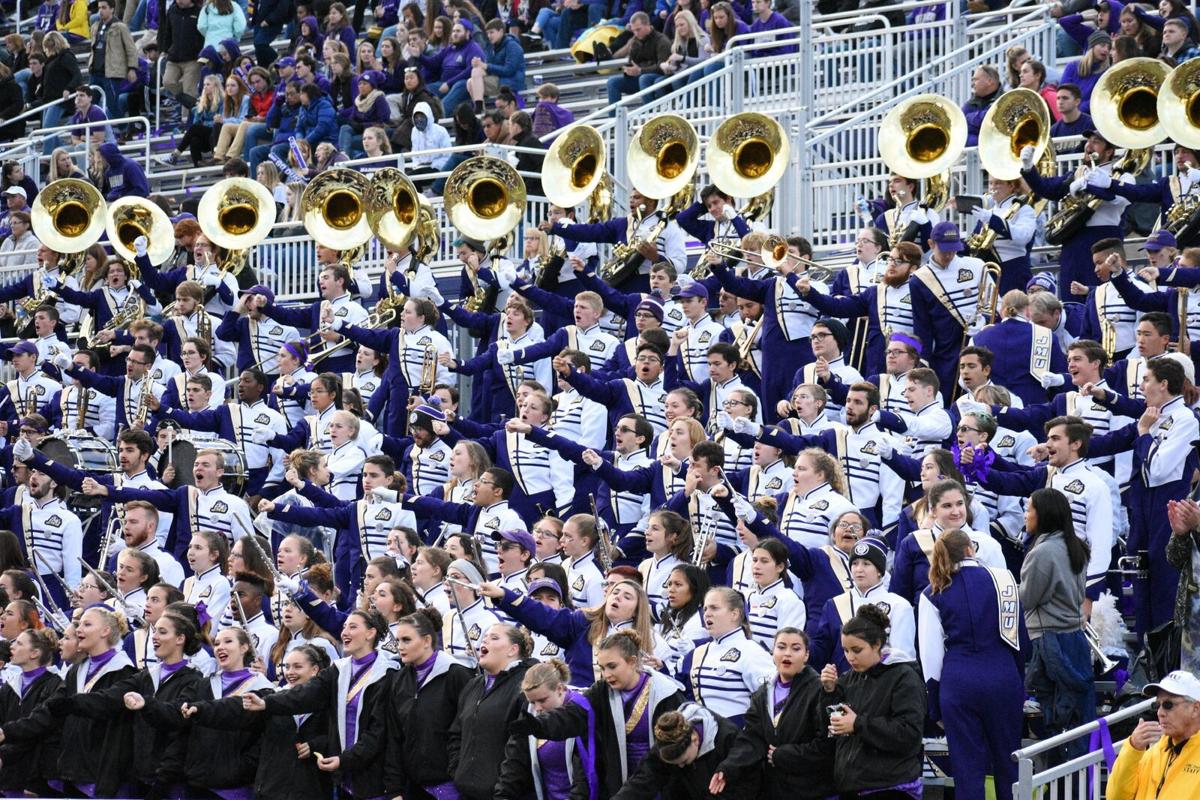 The MRDs depart for the Thanksgiving parade on Nov. 20.

In addition to the 535 MRDs, the Colorguard and Dukettes will also be attending the Macy's Parade.

Director of Bands Scott Rikkers says their "Macy's tune" is George Gershwin's "I Got Rhythm."

This year's appearance will be the first for most members, who say the opportunity is a "childhood dream come true."

The MRDs depart for the Thanksgiving parade on Nov. 20.

With Thanksgiving Break fast approaching, most JMU students are focused on surviving their last few classes before their 10-day hiatus from classes. Meanwhile, the JMU Marching Royal Dukes are preparing for their fourth appearance as one of two collegiate bands in the 2018 Macy’s Thanksgiving Day Parade on Nov. 22.

Previous Macy’s Parade appearances in 2001, 2008 and 2013 have given the band the experience necessary to hone its skills. Director of Bands Scott Rikkers is confident in the band’s preparations, citing their most recent performance as the format for their upcoming routine.

“We’re actually following a template from what we did in 2013,” Rikkers said. “Having gone in 2001 and 2008, we’ve learned a lot about the city, about timing and about transportation, so we think we’ve got a great plan for repeating what we did in 2013.”

The MRDs, who’ve dubbed themselves “Virginia’s Finest,” practice Monday through Friday, primarily working on their final task of correctly timing the 88 steps from the starting point to the center of the television frame. While practices haven’t dramatically changed recently, senior drum major Sophia Stone says they’re now feeling a sense of urgency.

“The intensity, I think, has upped now that we’re getting closer,” Stone said. “We’re focusing on trying to have really focused rehearsals so we’re able to be as productive as we can in a short amount of time.”

Five hundred thirty five members strong, the MRDs are the largest they’ve ever been — and the largest in the country — thanks to the band’s general no-cut philosophy, aside from percussion and Colorguard. Senior drum major Nanda Azevedo is thankful JMU gives a band of this size such a memorable opportunity.

“It is not easy to take 535 people to New York for the Macy’s Parade,” Azevedo said. “So I think we’re all just really thankful that JMU supports the arts and the MRDs as much as it does.”

All 535 MRDs, in addition to the Colorguard and Dukettes, will be attending the Macy’s Parade. While NBC originally limited the number of members who could perform to 485, Rikkers says they managed to reverse that rule without financial consequences.

“We were able to get the band in with the number of hotel rooms we have reserved and the same number of buses,” Rikkers said. “So financially, it wasn’t a burden.”

Their theme for the 2018 football season is “NEW YORK!” to promote the parade, featuring classic tunes from Frank Sinatra as well as music from the hit Broadway show “Hamilton” and modern pieces such as Alicia Keys’ “Empire State of Mind.”

The tune they will perform for television on the famous star at Herald Square doesn’t coincide with the theme. Rikkers says they’re sticking with what they know best for the big day: a big-band, brassy number.

“Our Macy’s tune is George Gershwin’s ‘I Got Rhythm,’ which has nothing to do with New York at all, interestingly,” Rikkers said. “But we knew the past several times we’ve done the parade that this band works well with that genre.”

In addition to “I Got Rhythm,” the MRDs will also feature “Seventy-Six Trombones” from the 1957 play “The Music Man,” the theme song from the 1991 film “Robin Hood: Prince of Thieves” and the JMU fight song. Rikkers notes these tunes won’t be featured on television but will instead be performed on a loop as they march in the two-and-a-half mile parade through the city — all of which isn’t shown on television.

“What you see on television isn’t actually the parade,” Rikkers said. “That’s the end of the parade where everyone comes through with floats and celebrities.”

The Marching Royal Dukes depart for the 2018 Macy’s Thanksgiving Day Parade on Tuesday, Nov. 20 and return Saturday, Nov. 24. Rikkers adds the MRDs are the third marching band in the parade lineup and will perform early, so he encourages fans to tune into NBC on Thursday, Nov. 22 at 9 a.m. to watch and follow MRD social media for more updates on the band’s specific position in the parade.

2018 marks five years since the MRDs’ last Macy’s Parade, so this year’s appearance will be the first for most members. For freshman music education major David Swanson, who plays in the band’s trumpet section, this opportunity is a childhood dream come true.

“Ever since I was eight years old, I’ve loved the Macy’s Thanksgiving Day Parade, and I always wanted to be part of it,” Swanson said. “We don’t usually think of our country having culture, but televising giant balloons walking through the streets is part of our culture, and it’s cool to represent that.”

With the immense dedication expressed by the MRDs, senior drum major James Pennington has no doubt they’re ready. Despite the stress, he believes the band has become closer because of it.

“To be able to go on this journey that’s pretty stressful and has its stressful moments, [it’s nice that] we all have each other to lean on,” Pennington said. “And we’re so close as a team that we just have so much fun, and that’s what makes those stressful moments so much better.”