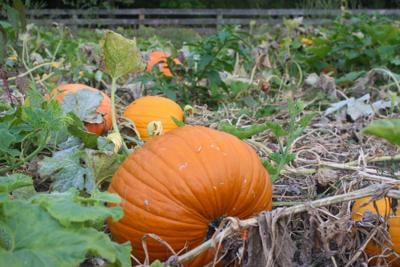 After a summer consisting of hot spells and limited rain, North Mountain Homestead was pleasantly surprised by its successful pumpkin harvest this fall.

The farm, located in Rockingham County, is 11.7 miles away from JMU and managed by the Williamson family. For the past seven years, they’ve grown and sold pumpkins at the property, but the prospects for this season were uncertain in the summer months.

Kimberly Williamson, who manages the farm alongside her husband, Justin Williamson, described the tumultuous growing season because of the lack of rain early on.

“The plants were completely drooped over to the ground and were very thirsty, meaning that the pumpkins will get ripe faster since they don’t have the foliage covering them from the sun and moisture coming in to keep them growing,” Kimberly said. “We were scared we would have a smaller crop, but the heavens opened up, and it started to rain.”

To kick off the season, the couple hosted a celebration Sept. 12 for families to pick pumpkins, play games and enjoy the weather. The event offered community members a safe opportunity to have fun as the pandemic continues.

“We thought about not having an opening celebration, but we just couldn’t,” Kimberly said. “People were looking forward to the change of the seasons and doing something outside. It was a picker-upper for us and the community.”

In addition to offering visitors an array of pumpkins to choose from, Justin noted that the homestead has a variety of activities for families to enjoy.

“We have a commercial playset, a couple different games — a duck race, a little checkerboard. We also have goats, chickens, bunnies, dogs [and] cats,” Justin said.

The farm is open to the public during October from 9 a.m. to 7 p.m. on Fridays and Saturdays and 1-7 p.m. on Sundays. Masks aren’t required as appropriate social distancing is feasible while on the property.

While the official pumpkin season only lasts a few months, the Williamsons dedicate many hours of additional time to preparations during the spring and summer months. Justin said he especially enjoys parts of the plant selection process.

“My [favorite] part of working is picking out the pumpkin seeds,” Justin said. “Me and [Kimberly] pick them out in the winter and get them ordered by February or March, getting them planted. And bees will cross-pollinate so you’ll get some different colors, shapes and sizes.”

The management of the farm is a family affair, as Justin and Kimberly’s children and parents help with various tasks throughout the year like washing pumpkins and setting up for events.

Shelia Reedy, Kimberly’s mother, said she loves being able to help the business while making memories with her family.

The work can be physically challenging at times as the family has to wash and haul large pumpkins. However, the family said the hours pass quickly and pleasantly as they enjoy working together.

Reedy said at the end of each season, Kimberly and Justin host a private picnic to celebrate the season and thank their relatives for their contributions to the business. They enjoy a variety of pumpkin treats, including ice cream and pie.

“My favorite memories — I would just say the whole thing, spending time with the family,” Reedy said. “It always ends up being a fun day, talking and laughing.”

Fall in Harrisonburg is beautiful experience, and there are many opportunities to socially distance oneself with outdoor activities. From pumpkin picking to hiking, are five autumn activities students and anyone in the 'Burg can enjoy.