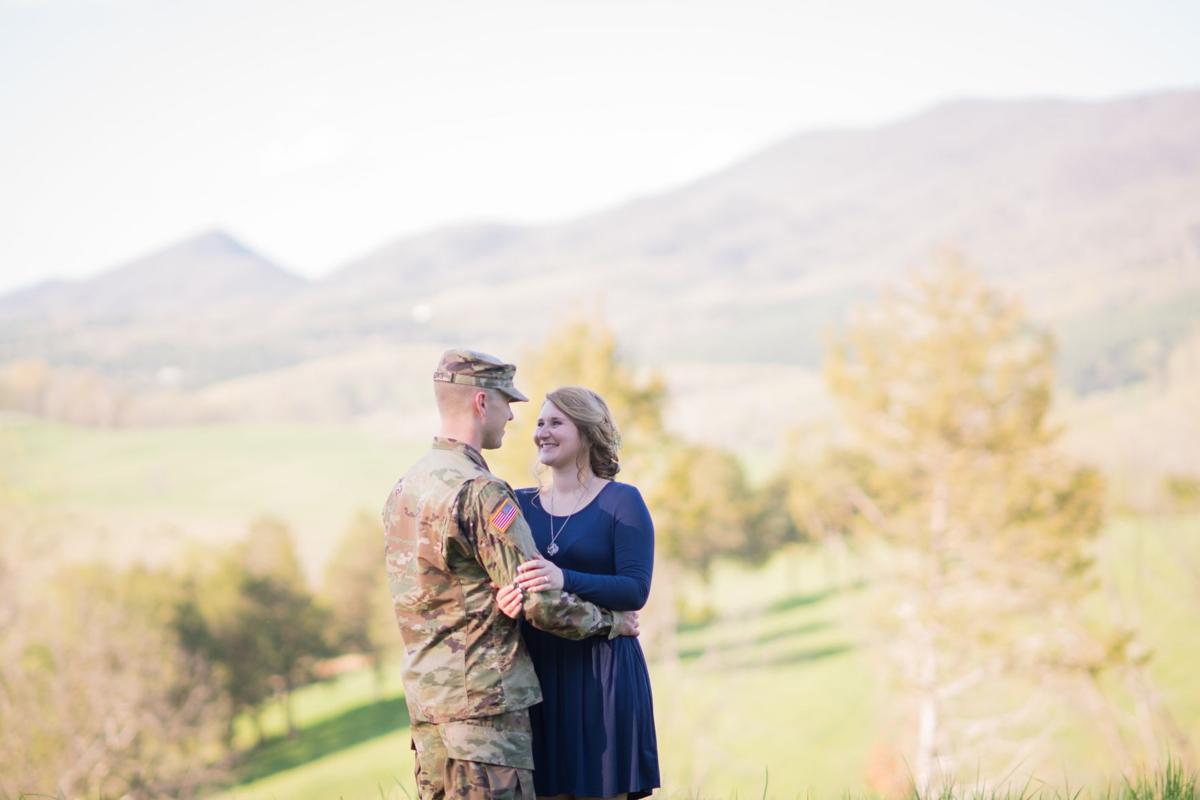 Sydney and Dillon live with a long distance relationship until Sydney graduates in December. 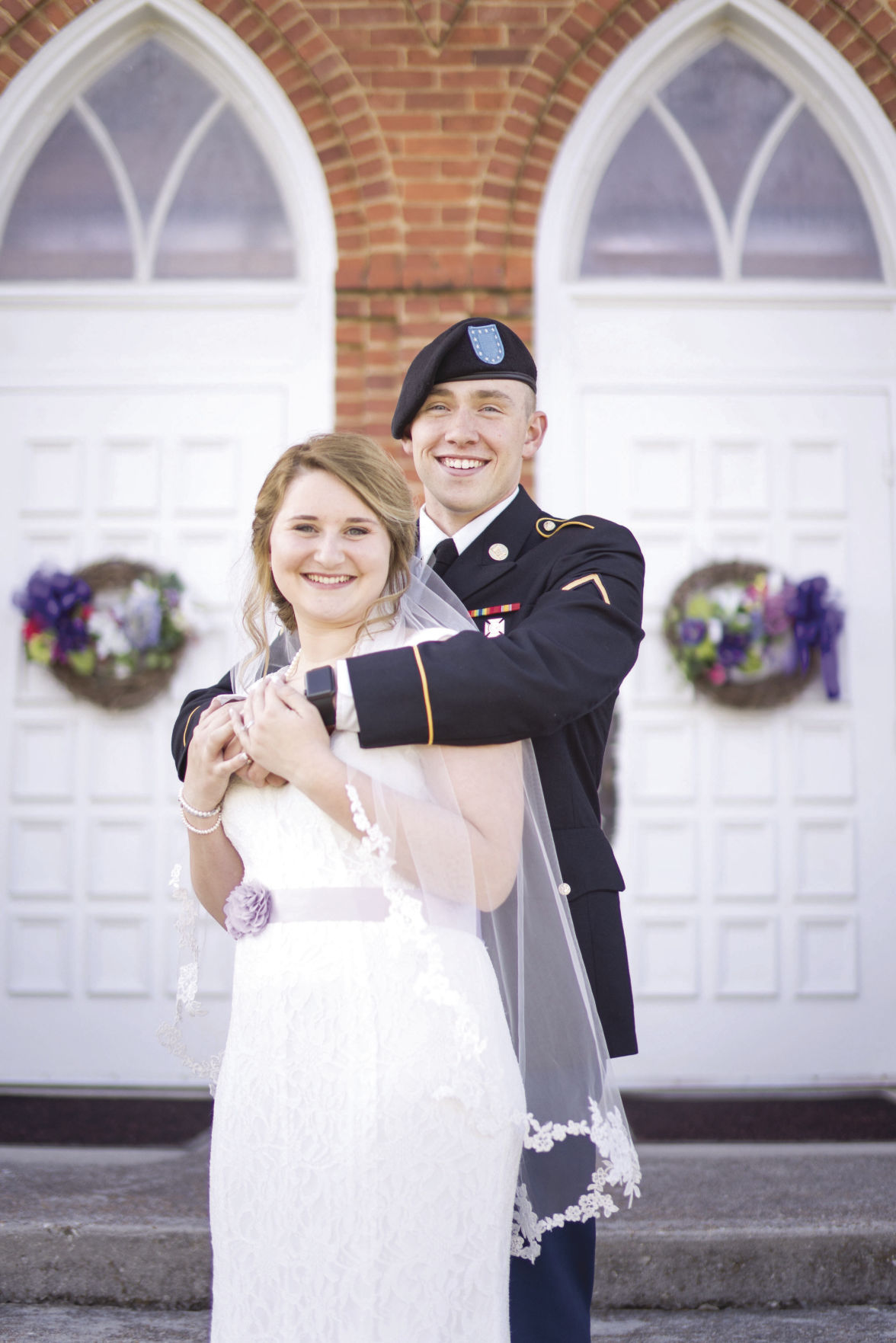 Sydney and her husband, Dillion are separated by 4,706 miles since he's stationed in Wahiawa, Hawaii. 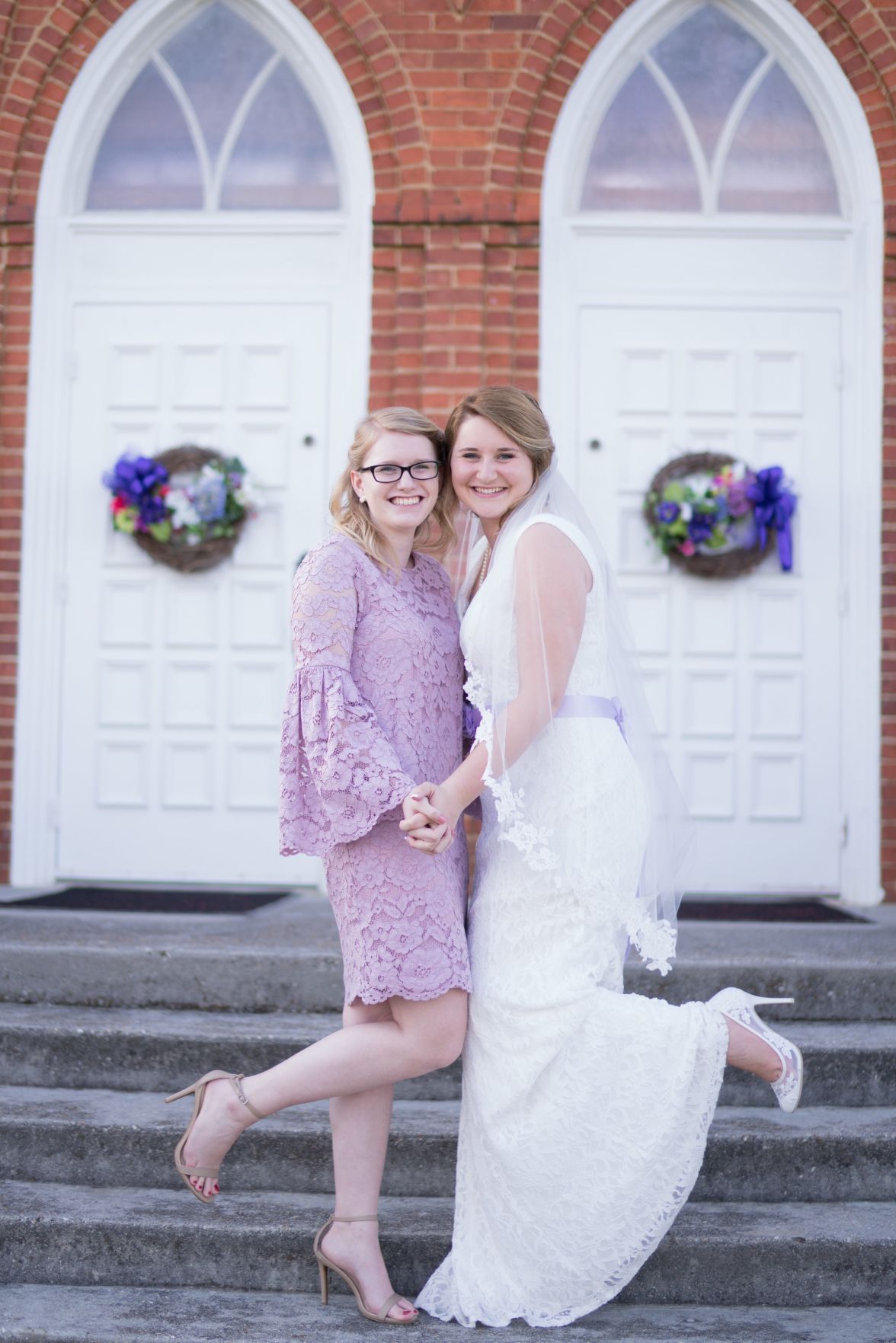 Joeli, Sydney's maid of honor, poses with her best friend in the front of the church. 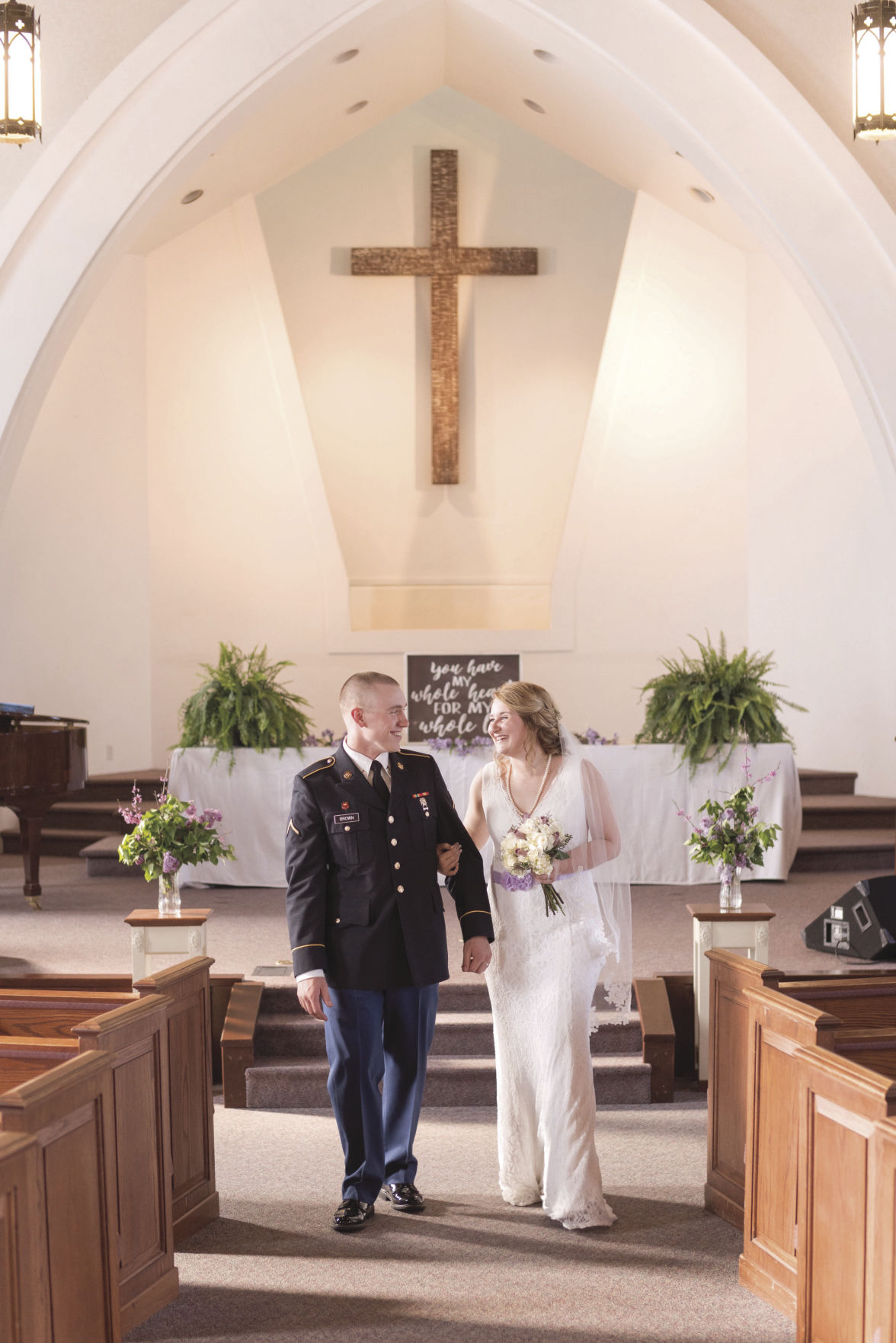 The couple got married at a small church Dillon grew up in at Buchanan.

She counts on her fingers. It’s 6 p.m. in Buchanan, Virginia, so it’s noon in Wahiawa, Hawaii, where her husband lives.

She slips on her purple floral muumuu, races downstairs to the basement, sinks into the couch, whips out her laptop and clicks the FaceTime app.

There’s a few low-pitched beeps, then a blue-eyed boy picks up. She sighs. She can’t wait for her husband’s face to be real — not on a computer screen. It’s been two-and-a-half months since she’s seen him in person.

“I just wanna snuggle and watch ‘The Office,’” she tells her husband, Dillon.

Despite being 4,706 miles apart, they still watch “The Office” together. Tonight, they’ll watch the “Dinner Party” episode.

“Yeah,” Sydney says. She looks up from her laptop and picks up the remote. “Three, two, one, play.”

The two attempt to click the play button at the same time. Dillon listens to both his and Sydney’s TVs through FaceTime to see if they’re synced up to the same scene.

“OK. Hit pause and then play, really quick,” he says.

This is a regular Friday night for Sydney, who’s 20. She FaceTimes Dillon, who’s 21, every day and occasionally stays up until 3 a.m. waiting for him to return from work.

Sydney’s married to a soldier. Dillon’s stationed in Hawaii as an Army combat engineer. The most challenging part of it all is that Sydney, a senior communication sciences and disorders major, is still attending JMU to finish her degree, commuting between Buchanan and Harrisonburg for an hour and 15 minutes to take classes. They were married during her freshman year in 2018.

‘Not your average wedding’

Dillon proposed to Sydney at his basic training graduation in April 2018. After that, he was only home for 10 days before he moved to Hawaii. But he said that on his way home, he couldn’t stop thinking about Sydney. He wouldn’t see his fiancee for an entire year since they wouldn’t be living together. He came up with a solution.

“Let’s get married before I go to Hawaii,” he texted her.

But when they arrived home and talked in person, it all made sense. If they were married, she’d be able to live with him in Hawaii, and he’d be able to get a house and better military benefits. Plus, they’d been wanting to get married for the past four years, anyway.

“We had known each other forever and knew we wanted to get married for a long time,” Dillon said. “So, it wasn’t your typical, ‘Hey, I just met you, but marry me,’ type of Army marriage.”

The decision was made, but they had very limited time to make it happen.

Since Sydney had a week of classes left in the spring semester, they decided to get married the Friday before exams began. They’d spend the weekend together, and he’d drive her back to campus for her final on Monday. He’d leave for Hawaii the same day.

The day after Dillon’s graduation, Sydney rushed to the local David’s Bridal to pick out her dream wedding dress before school the next day. She only had 15 minutes until it closed, but the employees stayed open late just for her. She fell in love with a simple all-lace gown. She ordered a lavender belt with a little flower on the front for a small, personal detail, as purple is her favorite color and matched the wedding reception’s decor.

“Everything just lined up so perfectly and fell into place that I just knew that it was God telling us that this is what we were supposed to do,” Sydney said. “I was never doubtful at all.”

Their youth pastor married them in the church Dillon grew up at in Buchanan. It was a small family wedding, and Sydney walked down the aisle wearing Dillon’s grandmother’s pearl necklace and her grandmother’s pearl bracelet. Joeli Martin, her best friend who attends Virginia Tech, skipped her Friday class to be Sydney’s maid of honor.

“It was all very last minute. I was freaking out for her,” Martin said. “But we made it work, and I got to be a big part of her day. I was tearing up the whole time.”

Marrying at 19 years old didn’t matter to Sydney. But to others, it did.

The Browns have lost friends. Sydney tries to not let the word “husband” slip in conversation. Some of her friends have expressed confusion and jealousy. Last Christmas, when Dillon was only home for two weeks, his friends said he was being “tied down” and “controlled” by his wife because he spent more time with Sydney than with them. He was especially frustrated about losing his best friend since preschool.

“Since then, none of those ‘friends’ have really reached out to me,” Dillon said. “So, I don’t expect to hear from them again this Christmas.”

According to the U.S. Census Bureau, in 2018, the average age for women to marry was 27.4 years old, and for men, it was 29.5 years old. Sydney said she’s certain there’s a stigma for marrying young, especially now when younger generations are marrying older. Even her mother — who married at 17 — told her to prepare to be judged.

“It really is a thing where people think you’re absolutely crazy,” Sydney said. “Once you get married, that’s kind of the end to your freedom and your fun. I really think that’s how they see it when, really, that’s not how it is.”

The stigma is especially prevalent among her peers in college. People see marriage as being stuck to one person and losing the “college experience,” Sydney said. But for her, Dillon isn’t taking away from her time at JMU. She said the way she and Dillon live and love each other proves these stereotypes wrong. Plus, her idea of the “college experience” has always been different — she came to learn, not to party.

The Browns don’t have time to worry about judgment with the Army constantly throwing “unexpected twists and turns” at them. Being long-distance doesn’t make that any easier. Since Dillon isn’t on his own schedule, it can be challenging keeping Sydney up to date.

Martin said that Sydney has lost sleep. If she has an exam the next day and Dillon gets home after midnight, she’ll still stay up to see his face and hear his voice.

“In your early 20s, this is supposed to be a time when you’re selfish,” Martin said. “And she’s married and doesn’t really get to do that right now.”

On Dec. 12, Dillon comes home for his 17-day-long leave. On Dec. 14, Sydney graduates from JMU. They said they’d be together forever after that. The couple hopes to move to North Carolina, where Sydney plans to get her doctorate at UNC-Chapel Hill. Dillon is thinking about reenlisting with the National Guard but is still figuring out what he wants to do in the Army. In the end, the Army has changed their lives.

“It turned my world completely upside down and is teaching me a lot about patience and letting go and letting things happen the way they are supposed to happen,” Sydney said.

But for now, every day until Dec. 12, Sydney will continue to count down the days until Dillon comes home. In her room, she has a whiteboard where she keeps track of the days left. Each morning she erases it and writes a new one, one less than the day before.

Contact Kailey Cheng at thebreezeculture@gmail.com For more on the culture, arts and lifestyle of the JMU and Harrisonburg communities, follow the culture desk on Twitter @Breeze_Culture.