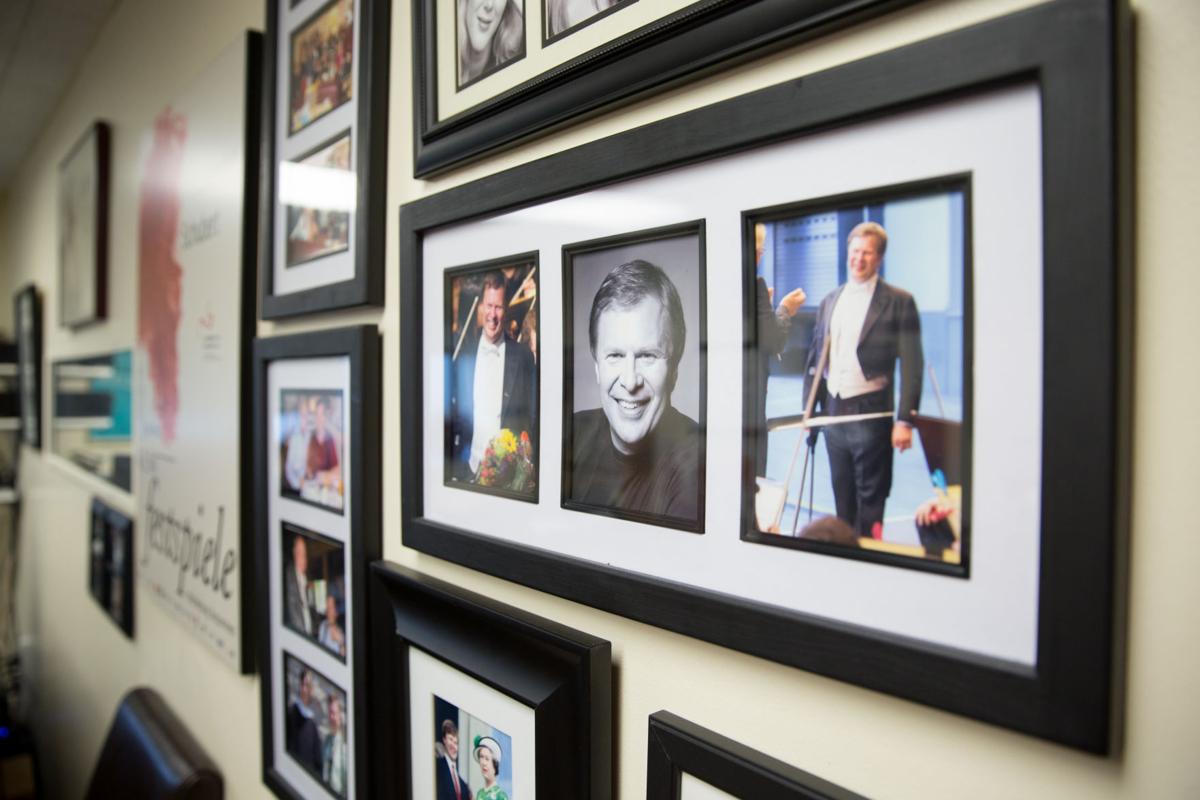 Before professor Kevin McMillan found his calling in voice teaching, he had a successful singing career. McMillan sang for Queen Elizabeth II and got a Grammy for best performance of a choral work. 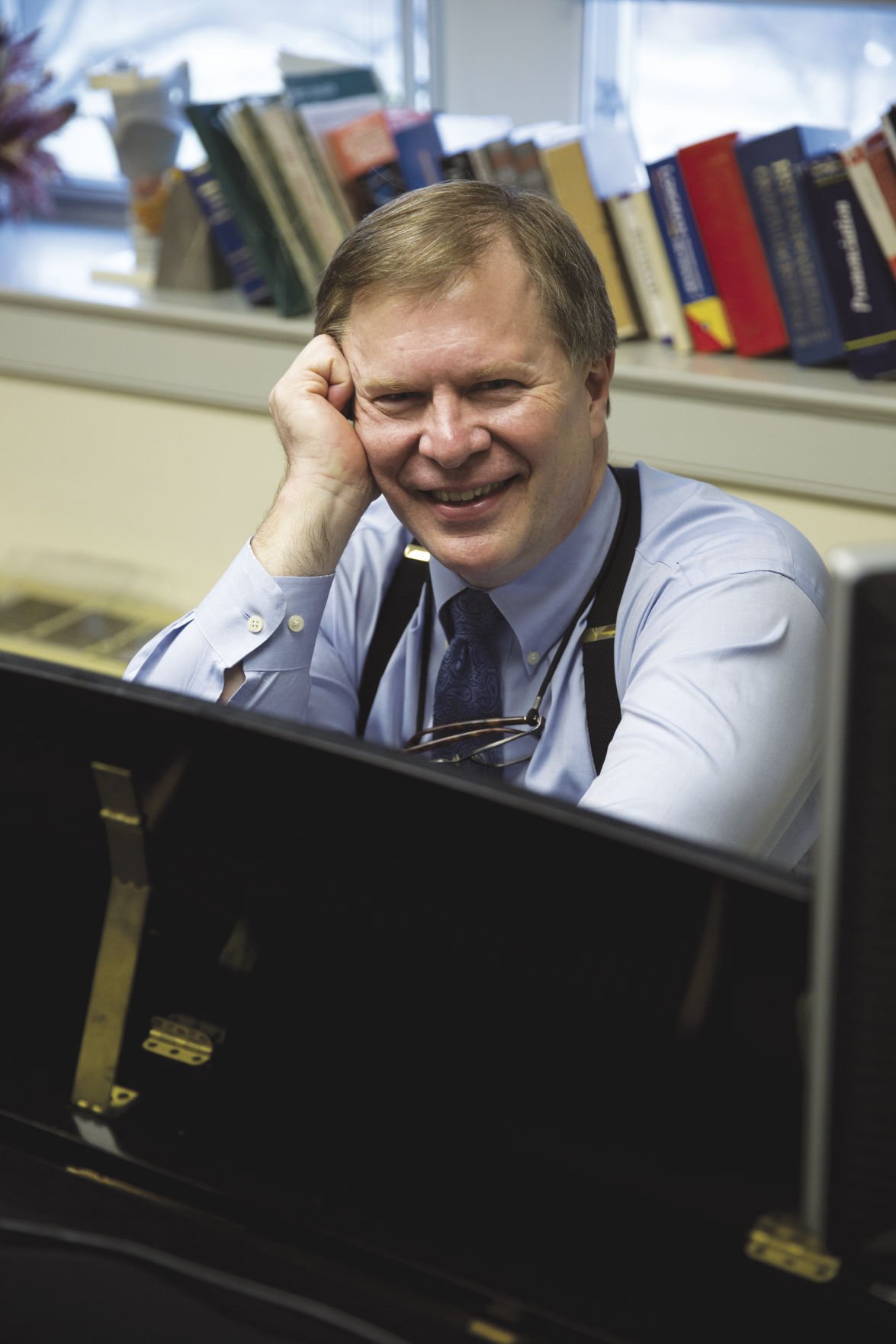 While his accomplishments are quite notable, McMillan isn't overly concerned with past achievements.

There are very few places JMU voice professor Kevin McMillan hasn’t performed. On a Wednesday night in his colorful office full of picture frames, McMillan sat at his desk with the gold embellishments on his Grammy plaque catching the light behind him, documenting all the places he’s performed, from Barcelona to Prague. He paused briefly, mentioning that he not only met the Queen of England, but sang for her too.

“The picture’s right behind you,” McMillan said.

And there it was. A 1992 version of the man sitting in front of me stood beaming in a red tie with none other than Queen Elizabeth II on Parliament Hill in Ottawa, Ontario, for a Canada Day celebration. He smiled as he recalled the moment.

“She was absolutely lovely that day,” McMillan said.

Born in Canada, McMillan grew up on a dairy farm. He did choir his entire school career and his aptitude landed him a spot in the prestigious Ontario Youth Choir.

Shortly into his first year at Western Ontario, McMillan’s life took an unexpected turn. While he was home helping his father on the dairy farm, McMillan fell down the storage silo chute and broke a vertebra in his back. The accident resulted in spinal cord damage and left him as a partial paraplegic.

“[The disability] changed my performing quite a bit, but not necessarily negatively,” McMillan said. “The secret is that I’ve always liked the sort of recital and concert world more than the operatic world, and who knows? Maybe my disability allowed me to enjoy what I really admire the most.”

After his first and only audition, McMillan was accepted into The Juilliard School and earned his master’s degree in two years. While he began his doctorate, McMillan became inundated with bookings and wasn’t able to finish. One year into the doctoral program at Juilliard, McMillan moved back to Canada and settled into a life of taking care of his newborn son and traveling for performances.

A world-renowned baritone, McMillan’s career includes over 800 performances, ample professional recordings and numerous awards, including a Grammy for Best Performance of a Choral Work, which he won in 1992 as a part of a recording he did of Carl Orff’s “Carmina Burana” with the San Francisco Symphony.

In 1999, McMillan began teaching at Western Ontario. In the 10 years he spent there, teaching quickly became “the core of his life.”

“Initially, I was, of course, a performer who taught a bit, but then I turned into a teacher who performed a bit,” McMillan said.

McMillan came to JMU in 2009 after being persuaded by his colleague to take a retiring baritone’s position. After years of performing, McMillan was happy to settle into a more relaxed lifestyle.

“Getting to see the world from that perspective has colored my life,” McMillan said. “I spent a lot of time in hotel rooms, and I have to say that I don’t need much more of that. I mean, I love the repertoire, I love performing, I love all of that, but being in one spot here in Harrisonburg and being able to live comfortably and in a community of peers and students … It’s a different life.”

Since arriving at JMU, McMillan has married fellow JMU professor of voice, Carrie Stevens. They’re coming up on five years of marriage in June. Citing McMillan’s skills as a linguist and “gorgeous voice,” Stevens is impressed with all McMillan has done in his international career.

“He has had a very, very rich career and is a wonderful artist and all of his international work has been on his crutches,” Stevens said. “Which is amazing.”

McMillan is grateful for the time he’s gotten to spend on stage. As a teacher, he hopes to show his students that the experiences he’s had are within reach and inspire them to try.

Erik Grendahl, a JMU alumnus (’16), is a former student of McMillan’s. Having come to JMU prior to his acceptance to explore music program options, Grendahl met with McMillan for a lesson. Later, Grendahl was accepted to JMU and began training with McMillan. Grendahl says the most important thing he’s learned from McMillan is to perform songs as if the composer was still alive.

“There’s so much brilliance on the page and that’s why their — like the Schuberts of the world, the Mozarts of the world, the Beethovens, you name it — their brilliance lives on through their work,” Grendahl said. “It’s not really about you as the artist, it’s still about the composer and you’re just the medium. You’re just the vessel for which this beautiful song that’s lasted several centuries is still around and why people still come to see it.”

McMillan’s passion for JMU and his students is evident. Having been to many places in his life, he’s glad to be somewhere that inspires.

“I’m really thrilled to be here,” McMillan said. “JMU, the more you get to know it, it’s really a wonderful sort of academic and social place that I think everybody from a freshman student up to me senses. It’s just different. I’ve been to a lot of different institutions, but JMU inspires ... this sense of community and willingness to make things happen as opposed to waiting for them to happen, and that goes right from a freshman student right through to faculty and administration.”

Contact Abby Church at churchae@dukes.jmu.edu. For more on the culture, arts and lifestyle of the JMU and Harrisonburg communities, follow the culture desk on Twitter @Breeze_Culture.

Abby Church is the Editor-in-Chief of The Breeze. She’s a junior media arts and design major with a concentration in journalism and a minor in creative writing. Fun fact: she's an award winning reporter and rapper.