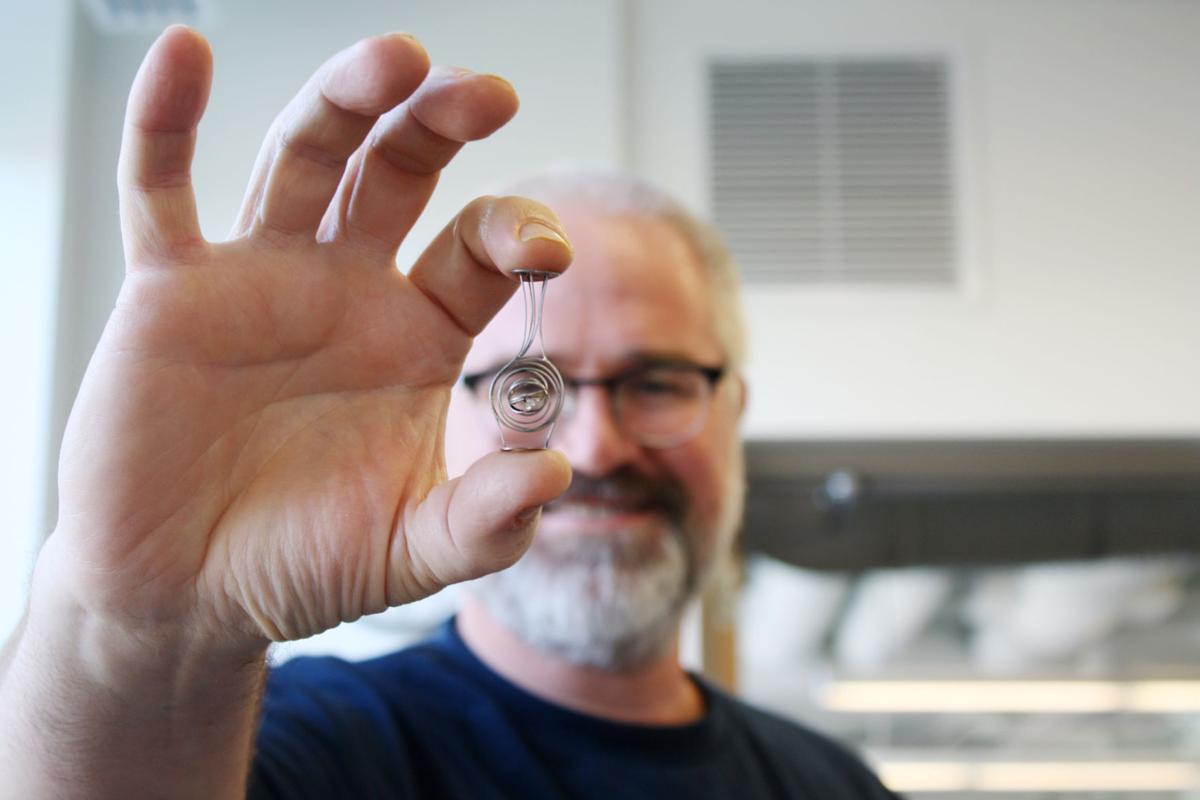 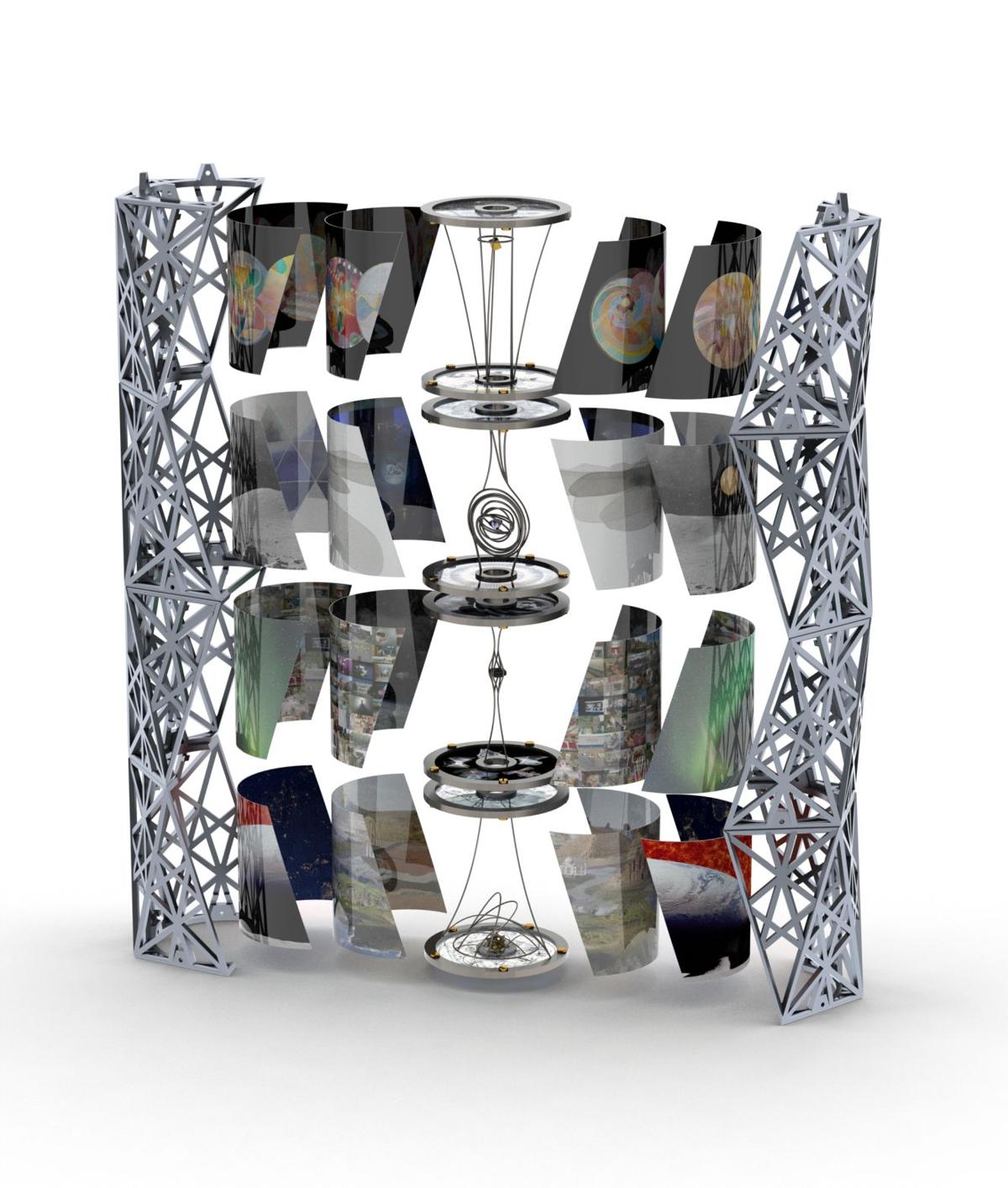 Sending a project — even as small as MoonArk — to the moon can be costly. 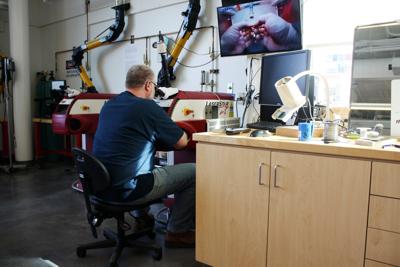 When JMU art professor Mark Rooker was offered a chance to help send an art exhibit to the moon, he was thrilled.

In the fall of 2013, Rooker was recruited by Carnegie Mellon professor Mark Baskinger to be a part of the MoonArk project, which aims to send a small art museum to the moon. At the time, Rooker and Baskinger were in graduate school together at the University of Illinois at Urbana-Champaign.

Rooker said Baskinger was already working on the project and asked him to join. The team realized that the scale of work was going to require the skills and vision of a sculptor who could work precisely and with the tolerance needed for an object that could survive the trip to the moon.

“I jumped at the chance to be a part of their team,” Rooker said. “Further, if the sculptures are successfully landed on the moon, it will only be the third piece of art placed there and the most artistically significant.”

“We have launched thousands of things into space, and without exception, they are dull, ugly, hyper-functional things,” Rooker said. “They speak well of our desire for information and communication, but they do not capture our aspirations or the complexity of our cultures. The MoonArk is an attempt to place a richly detailed snapshot of humanity in a place where we are only beginning to be able to reach.”

Baskinger, the project director, said MoonArk is a lunar gateway for the U.S. government and NASA to explore deeper into the solar system. With more manned missions to the moon planned, the hope is to set up a base.

MoonArk was pioneered by Lowry Burgess in the late 1960s and has continued to grow into what it is today. In 2009, Baskinger joined the project as the industrial designer and eventually became the co-director with Burgess.

“Humanity is going to move out into space by default, and it will drag its culture with it,” Baskinger said. “With intentional work like this, we can set the message for what that culture is.”

According to CNN, the MoonArk exhibit itself will be a nine-ounce time capsule attached to a rover in hopes that one day, it may be picked up by human explorers. The capsule is made up of a stack of small chambers that represent the Earth, the moon and other regions of space.

“The MoonArk offers an objective look at life,” Baskinger said. “It’s apolitical and non-controversial. It’s a collection of art, materials, samples and images that give a pretty good first look at what humanity is like today.”

After being recruited by Baskinger, Rooker joined the MoonArk project as what he calls the “sculptor.” He said he created the sculptures that occupy each chamber. He also designed and fabricated the rims and hubs that hold the sapphire disks and the micro-payload chambers welded to each rim.

“The best way to think of my role is if the MoonArk is a museum in miniature,” Rooker said. “Then, like a museum, it has an architecture that houses and exhibits the contents of the museum, and that architecture may include sculptures that are a permanent part of the museum that work with the design of the building.”

Along with Rooker, JMU engineering students and machinist Mark Starnes helped build some of the parts that made the project come together.

Starnes said the machine shop at JMU helped in the process of making titanium rings and  assembly jigs — which are used for attachment and securement of the parts and modules — for the MoonArk structure. He said he and students in the machine shop were also essential in completing a drilling and tapping process on the 24-karat gold center sculptures.

“All work, including engineering, was performed by junior and senior engineering students,” Starnes said. “All the students involved were really excited to be having parts traveling to the moon.”

The main purpose of MoonArk is to have something to hold on to in the future when there may be more human explorers going to the moon. Baskinger said another reason MoonArk is important is because of the impact it’ll have. He said it shows that a project like this can be done, and it'll hopefully expand the boundaries of what people think they can do when it comes to space.

Rooker and Baskinger said they hope MoonArk will inspire other projects like it. Baskinger said in some ways, parallel projects have already started, whether it be time capsules or more people going to the moon.

Although sending art to the moon is very expensive, Rooker said, he thinks MoonArk will inspire other projects like it, but his main goal of working on this project is “to make people look up again.”

“I am a maker, a designer and an artist,” Rooker said. “This makes me look at the things humans make and think about what they say about us.”

Contact Morgan Vuknic at vuknicma@dukes.jmu.edu. For more on the culture, arts, and lifestyle of the JMU and Harrisonburg communities, follow the culture desk on Twitter @Breeze_Culture.