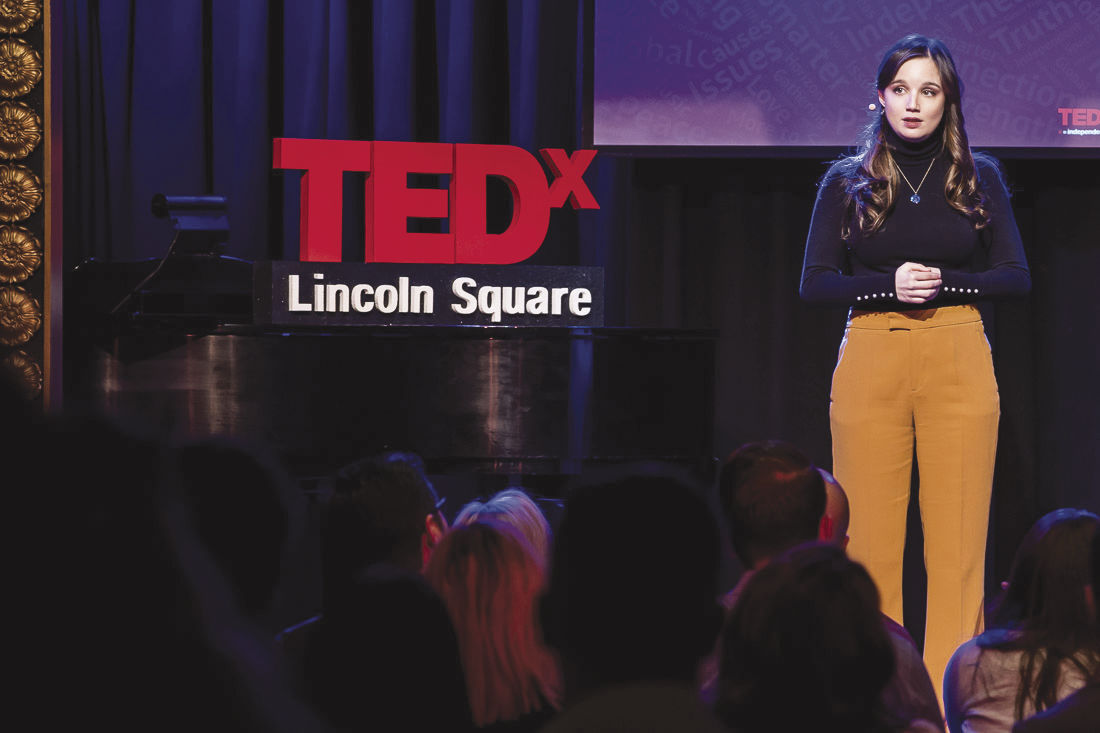 In Montana's TED Talk, she explained the process of how she tried to forgive the man who killed her mother and brother. 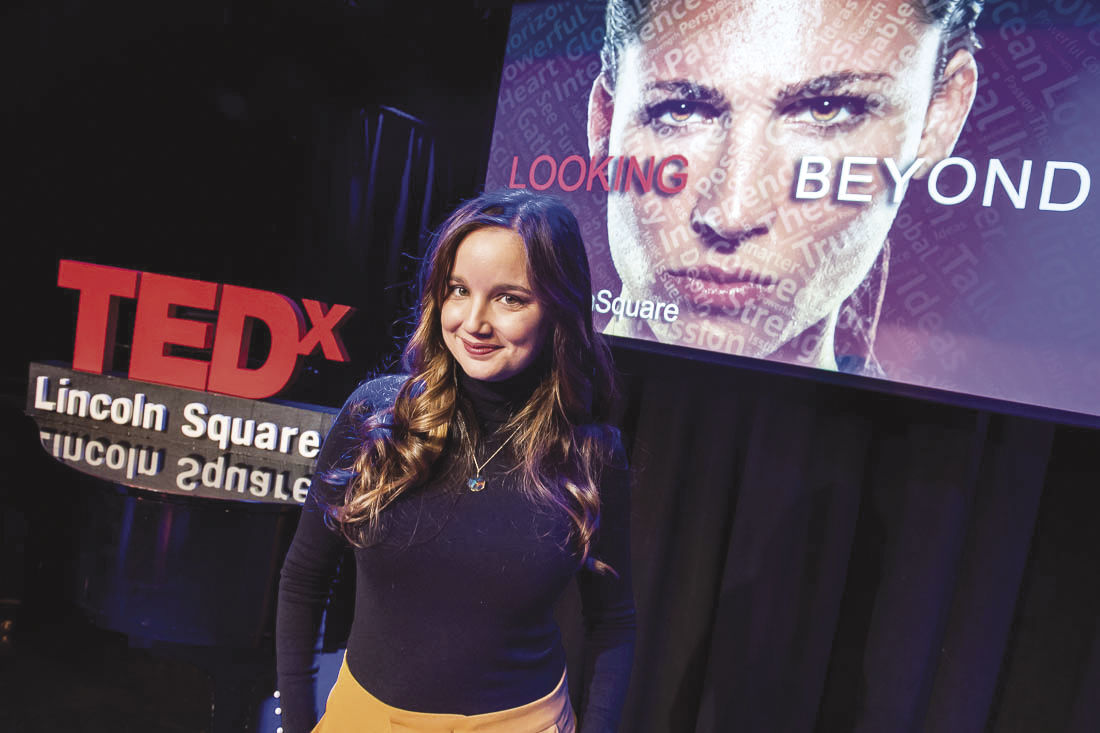 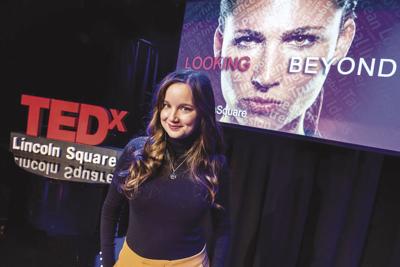 In Montana's TED Talk, she explained the process of how she tried to forgive the man who killed her mother and brother.

After coming down with a heart condition, JMU musical theatre alumna Sarah Montana (’09) was forced to cut all clients for whom she was ghostwriting — writing text that’s officially credited to another person as the author — to focus on her health. She stood in the mall on the phone with her husband, hit “send” on the final email and began to feel the panic set in about how she was going to make money. Miraculously enough, her phone call was interrupted by another line ringing her. She answered to Hallmark delivering the news that two of the screenplays she pitched had received the green light for publication.

Montana’s experience in the arts dates back to when she was 13 years old. She wrote plays, ran a drama club, directed musical programs for fifth graders, sang and acted. Montana’s parents tried to foster creativity in their children by educating them in the arts, film, plays and literature.

“My parents were huge pop culture junkies,” Montana said. “It was like, very important for me to see the most significant films and what the Oscar contenders were. I started watching adult movies when I was pretty young. We watched Disney, and we watched ‘Terminator.’ Nothing was off limits.”

During her time at JMU, Montana worked as a music director for “See What I Wanna See” and “Edges.” She also starred in a few plays herself, such as “Urinetown,” “City of Angels,” “Cosi Fan Tutte” and a production of “Chess.” After graduating, she attended graduate school at Manhattan School of Music in New York City and was offered an acting position in a production of “The Sound of Music.”

“I was so excited I had booked a job, and then I realized I was gonna have to do the same thing 72 times in a row, and that sounded really boring,” Montana said. “Being an actor is an amazing, creative thing, but I realized for me personally that being on stage didn’t fill me up the same way that being on the creative side of the table did. And so I decided that I was gonna be a writer.”

Montana began establishing herself in her career by ghostwriting for public figures. She wrote celebrity book proposals, articles for the famous and edited novels. After a year or so of behind-the-scenes work, she was diagnosed with a defect in her upper left aortic valve.

“It was of one of those things where I was like, ‘OK, sometimes you have to make space and take the leap,’” Montana said. “And for me, it was getting sick to start saying ‘no’ to people so that there was space for my own stuff to matter.”

The day after Montana received the phone call from Hallmark, she got an email inviting her to do a TED Talk in New York City. The TED Talk was about the journey she went on to forgive the man who killed her mother and brother.

Montana’s brother Jim was a sophomore at JMU when she was a senior. Over winter break, someone broke into their house — not thinking that anyone was home — and fatally shot her mother and Jim.

Montana said she spent 10 years trying to figure out how to move on from the tragedy. She kept telling herself that she forgave the man, but it wasn’t working. Doing the TED Talk was a transformative, liberating experience — she was able to own her story and share it with the world.

“I got some serious criticism for it,” Montana said. “Not everybody loved that I did it, but I get emails from people every day who are like, ‘Thank you for saying this. I was feeling really lost’ … There’s never a downside to sharing your story because somebody else needs to hear it.”

The characters in her first screenplay, “Love to the Rescue,” were inspired by people Montana knows and loves in real life, like her mom, dad, friends, husband and a little bit of Ben Wyatt from “Parks and Rec,” she says. The movie, which debuted in March, is about two single parents whose kids want to adopt the same dog. Hallmark flew Montana down to the set to watch the filming process and even cast her in a small role.

“When my dad first watched the movie, he was like, ‘Wait a second,’” Montana said. “He was calling me out on all the little things … For the lead lady, I put a lot of my mom into that character. She was super creative. She was not a rules kind of person, she loved to think outside the box and, you know, get messy. She was very Ms. Frizzle from ‘The Magic School Bus.’”

For Hallmark, screenplays have to come in at about 110 pages; however, TV movies are different than normal screenplays, Montana says. To accommodate for all the commercial breaks, the typical three-act screenwriting structure must be transformed into a nine-act structure.

Usually, Montana will end up writing the full scene, then go back and split it up. In “Love to the Rescue,” for example, she decided to put the scene-cut at the pet adoption center right after one parent looks at the other and says, “Oh no. You can’t adopt that dog. We’re adopting that dog.”

Montana tries to push boundaries with her writing by doing  fun and subversive things. Hallmark has a specific brand, and she says they know exactly what kind of stories they’re looking for.

“I know that can sound creatively limiting, but it’s actually really freeing in some ways and a nice challenge,” Montana said. “Because you have this very specific box that you have to work within, and you still have to figure out a way how to make a story within that box feel interesting.”

The best way to develop original, creative stories is to take a neurological approach, Montana says. The brain is always going to grow in areas that it focuses on. If the focus is on creating, then more original work will be produced. If the focus is on mistakes, however, those mistakes are just going to be amplified.

She’s attended writing retreats in Guilford, North Carolina, Nashville and Paris where she practices writing uninterruptedly for 25 minutes to a prompt. She’s told not to think about what she’s writing or make any edits. She can write “blah, blah, blah” for five pages — which is fine  — because on the sixth page, genius ideas may come pouring out.

“When she was first pitching to Hallmark, we sat in her apartment and for 30 minutes, just came up with, like, insane idea after insane idea,” Montana’s best friend and JMU alumna (’09) Shannon Kingett said. Kingett is the director of marketing for Harry Potter on Broadway and also produced Montana’s first play, “The Girl Who Goes To The Minotaur.” She talks to Montana daily and has read through every one of her movie scripts.

“Working with Sarah is just like being friends with Sarah,” Kingett said. “It doesn’t feel like work when it’s your best friend … I think that she’s insanely talented and she’s gonna be famous one day. She’s already well on her way.”

By the end of 2020, Montana will have six more filmed screenplays under her belt. She only has working titles for them at the moment, but says there’ll be a movie out this summer, a Christmas movie and a New Year’s Eve movie. As for next year, there’s a Valentine’s Day movie, a fall movie and another Christmas movie coming.

“I am amazingly proud of her,” her husband, Matt Montana, said. “She fascinates me [with] the way that she can come up with the stories in her head, and she never stops. Her brain is constantly going and constantly writing.”

Montana’s short-term goal is to keep writing for Hallmark and to finish her book on her mother and brother’s death and get it published. In the future, her dream is to work on TV pilots and one day be a showrunner or film writer.

Contact Jamie Graeff at graeffje@dukes.jmu.edu. For more on the culture, arts and lifestyle of the JMU and Harrisonburg communities, follow the culture desk on Twitter @Breeze_Culture.