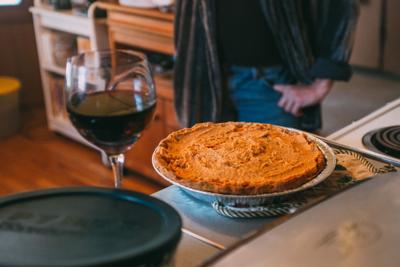 Prepare for a kitchen filled with the comforting smell of cinnamon and nutmeg. Fall has arrived and so has the classic flavor of the season: pumpkin.

From baked goods to milkshakes, there are many pumpkin-based foods to try. Whether one is in a dorm, an apartment in Harrisonburg or living at home, there’s a recipe for everyone to enjoy.

One of the most famous desserts of autumn, pumpkin pie, is a fairly easy recipe to make. While it’s a popular treat at Thanksgiving, it can be made throughout the fall. Using the recipe from Libby’s 100% Pure Pumpkin, all one needs to try this dish is a can of pumpkin — not pumpkin pie filling — eggs, a few spices and pie crust, which can be bought from the store.

The simplicity of the pie makes it fun to bake and something that could be done in a dorm kitchen with minimal supplies. When completed, one can taste the fantastic combination of pumpkin flavors, a flaky crust and the sweetness of the whipped cream.

Mix the dry ingredients in a small bowl. Beat the eggs in a large bowl, then add the pumpkin, then the dry ingredient mixture. Gradually stir in milk. Once the batter is complete, pour it into the pie shell. Bake in a preheated oven at 425 degrees for 15 minutes. Reduce temperature to 350 degrees, then bake for 30-40 minutes or until a knife inserted near the center comes out clean. Cool on a wire rack for two hours. Serve immediately or refrigerate.

This is another straightforward recipe. All one needs to make Tasty’s Pumpkin Pie Milkshake is a blender and three ingredients. Whipped cream from scratch could be made to elevate the drink, but buying some from the store works just as well. When blending the ingredients, ensure that the consistency of the shake is smooth and creamy before serving.

This recipe can be done in any kind of kitchen, as it doesn’t require much. After one sip, one will discover a new favorite fall drink that provides the taste of pumpkin pie but can also be taken on the go for a stroll on the Quad.

For the optional whipped cream:

In a blender, combine the pumpkin pie, tablespoon of maple syrup, and the ice cream. Blend until smooth, which may require manually stirring the ingredients. Pour the milkshake into a glass and top with whipped cream.

If one desires, they can make their own whipped cream at home. To do so, combine the heavy cream, powdered sugar, pumpkin pie spice, and 1 teaspoon maple syrup in a medium bowl. Whip with an electric hand mixer until medium peaks form.

Inspired by the Hogwarts Express treat from the “Harry Potter” book series, pumpkin pasties are like miniature pumpkin pies. Similar in form to apple pie turnovers or more savory empanadas, pumpkin pasties are small hand pies that are filled with pumpkin. The dough one uses to make this recipe can be premade to simplify the process.

Some helpful suggestions are to use a round glass or cookie cutter to shape the dough in 3-inch circles. One should begin filling the pies with less of the pumpkin mixture, then add more as needed to ensure the pies can close.

Though it may be hard to form the circles and seal the pies if one does not have all of the best tools at their disposal, that shouldn’t discourage the aspiring baker. The pasties are a perfect balance of crust and filling, providing a fantastic taste that will be worth the work.

Preheat the oven to 400 degrees. While it heats up, combine the pumpkin, sugar, nutmeg and cinnamon in a bowl and mix well. Roll out the dough ⅛-inch thick, then cut out 3-inch circles. Put about 1 tablespoon of filling in the center of each circle of dough. Moisten the edges with water, fold the dough over the filling, and crump with a fork to seal the edges. Cut slits to make vents. Bake on an ungreased cookie sheet for 20 minutes or until browned.

Another recipe from “The Unofficial Harry Potter Cookbook” by Dinah Bucholz, this pumpkin bread is a sweet treat that can be enjoyed as a breakfast meal or as a snack throughout the day. The recipe requires an electric mixer — a handheld or stand mixer works — and takes more time to prepare and bake than the previous dishes on the list. Someone living in an apartment with more kitchen equipment might find it easier to make this than one living in a residence hall.

Preheat the oven to 350 degrees. Meanwhile, grease and flour an 8 ½” x 4 ½” loaf pan. In a bowl, whisk together the flour, salt, baking powder, cinnamon and nutmeg and set aside.

Fill the prepared pan with the batter and bake for 1 hour, rotating halfway through baking, until the top is golden and the loaf is well risen. Remove from the oven and cool in the pan. To serve, remove from the pan and cut into thick slices. Top with powdered sugar if desired.

My grandmother’s pumpkin cheesecake is certainly the most advanced recipe on the list, but the time and effort will pay off once one takes a bite. The cheesecake tastes similar to the pumpkin pie, but the cream cheese adds a denser and richer flavor, and the homemade crust creates a more sturdy foundation.

Before taking on this recipe, one should know a springform pan is necessary, as well as an electric mixer. If one is missing the pan, then it can be found at grocery or craft stores.

Cream butter and sugar until light and fluffy; blend in one egg. Add flour and mix well to create the dough. Next, press the dough on the bottom and 2 inches high around the sides of a 9-inch springform pan. Bake at 400 degrees for five minutes, then remove from the oven. Reduce oven temperature to 350 degrees.

Combine softened cream cheese and sugar, mixing at medium speed on an electric mixer until blended. Blend in pumpkin and spices and mix well. Add the remaining eggs, one at a time, mixing well after each addition. Pour mixture into the pastry lined pan; smooth surface to the edge of the crust. Bake at 350 degrees for 50 minutes.

Whether one wants to stay home and social distance or is looking to expand their cooking horizons, these pumpkin recipes are fun to make and easy to enjoy all season long.

No meal is complete without a decadent dessert, including Thanksgiving. Culture writer Traci Rasdorf gives five recipes to satisfy any sweet tooth.