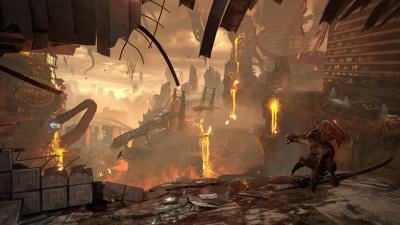 “DOOM” is absurd. It always has been, and it always will be because that’s the game’s brand. Back in 1993, the newly introduced gun mechanics and unique interface made the original “DOOM” the go-to first-person shooter (or FPS) of the decade and inspired a new direction for the genre.

With its new release, developer id Software has once again delivered an explosive and genre-bending take on the FPS style. Between customizable options for gun modifications, massive world-building and breakneck-paced combat, “DOOM Eternal” is here to declare itself the king of FPS.

The player controls the DOOM Slayer on his mission to eliminate the three Hell Priests that lead the invasion on Earth. Accompanying him is his vast arsenal of weaponry and his own flying castle in space.

The game started off with just a combat shotgun and a short tutorial on how to efficiently dispose of enemies. Most players might want to ignore the tutorial and jump right into the gory and satisfying combat. However, “DOOM Eternal” isn’t a simple shoot 'em up that can be picked up and played casually. The combat requires quick, strategic decisions; otherwise, the player will find themselves dying more times than they can count.

One element that greatly helped me understand the flow of combat was the massive in-game codex. I’d receive entries by encountering new enemies or unlocking new guns for the Slayer. Each unlockable codex entry listed off each enemy’s weaknesses and the specific guns to use when encountering them.

For example, enemies such as the Pinky can intake an absurd amount of damage from any gun before dying. This could waste the player’s ammo and leave them in a tough situation depending on the other enemies around. Though, if the player pays attention to Pinky’s codex entry, they’ll see that his weakness is a soft spot on the lower half of his back.

After learning that, I began using my super shotgun to grapple onto the side of him and swing myself around until his soft spot was revealed. Not to mention, there are various ways to unlock different abilities for the Slayer. These upgrades can completely change the flow of combat between the preferred playstyles of players.

The various upgrades include weapon modifications, grenade buffs and several in-game physics upgrades. In my case, I could freeze my enemy with an ice grenade, grapple onto the Pinky with my flaming super shotgun hook — the flames cause him to drop armor for me to pick up —  and, in slow-motion, rotate my body around him until delivering the final blow to his backside.

It’s these minute changes in gameplay that make “DOOM Eternal” such a satisfying experience. I had to come up with a new scheme for every enemy I faced, and after my 20-hour playthrough, I genuinely felt like I’d mastered the art of demon dismemberment.

Besides the polished combat system, “DOOM Eternal” is brimming with unbelievably detailed lore and history, though the narrative in “DOOM” can seem absent at times. The brief moments of dialogue are gripping and intense, but putting the events of the story together can be a bit challenging.

The codex solves this issue. It provides players with an encyclopedia of past knowledge regarding the Sentinels, Hell Priests and any notable planet or place the Slayer visits. This fills in any gaps in the current story and helps those who haven’t played the past installments.

Through my journey, the codex became my best friend. It was always there to add another layer to the main story when the cutscenes weren’t enough, and I found myself addicted to learning more about the hellish world around me by obtaining every single entry in the game.

After beating the campaign, “DOOM Eternal” features a new multiplayer mode that pins players against each other in a two-versus-one battle. Two demons face off against one slayer, except the demons have the ability to summon underlings to help them in combat.

While this mode may seem like an experimental side project, the multiplayer in “DOOM” is actually quite hectic and a blast to play with another friend. It transfers the fast-paced and horrific gore over seamlessly and offers yet another mode to master.

There’s something quite unique about “DOOM Eternal.” Yes, Hell is trying to eradicate Earth and all its inhabitants, and yes, there’s a superhuman space marine who’s willing to risk his life to defeat every single demon by himself, but that isn’t what makes this game so perfect.

It’s the attention to detail in every aspect of this game. It’s the lore and breathtaking worlds that the Slayer will visit. It's the fluid combat and the ability to slowly master the Slayer’s movements and weaponry until even I couldn’t deny the massive leap in my own skill level. This is what sets “DOOM Eternal” apart from other stylized FPSes in the industry, and it’s what clearly makes it the best addition to the famous series.

Top five most anticipated games of 2020

The new year is bringing with it some of the greatest video games. From "Final Fantasy" to "The Last of Us," here are the games we're most excited about.