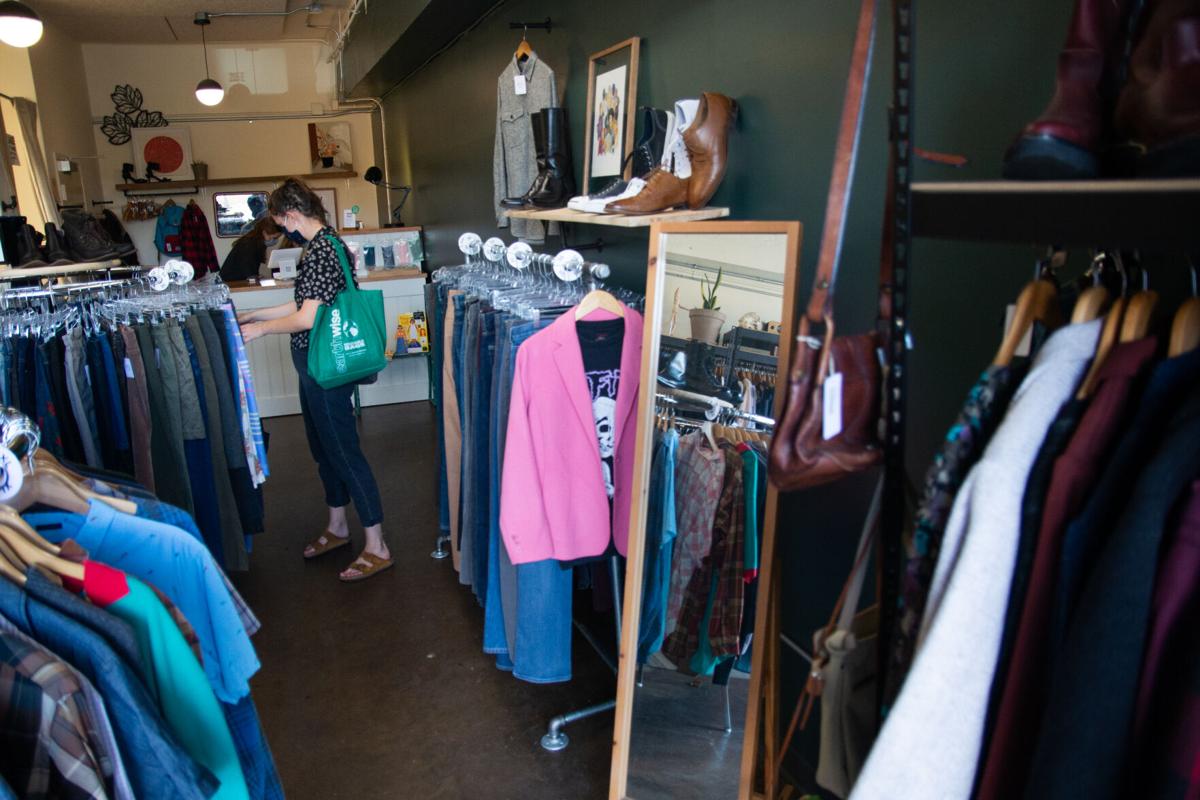 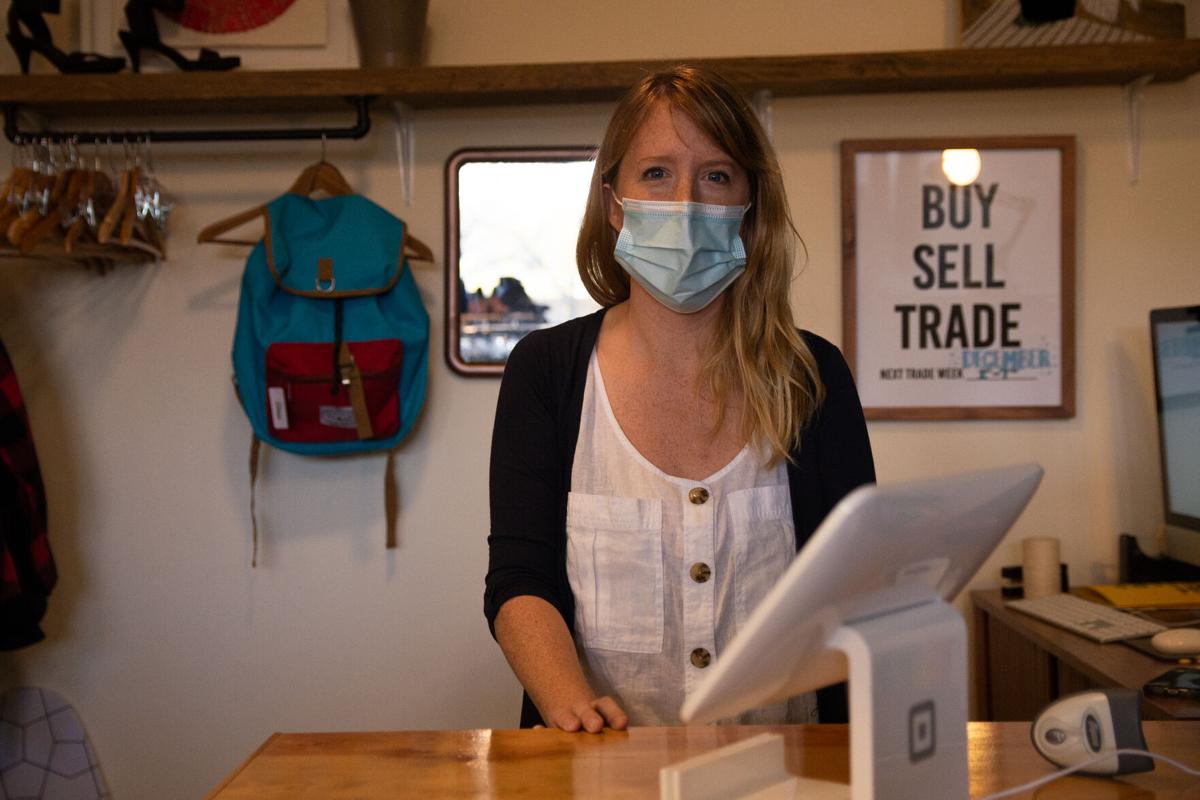 Mary Yoder-Anderson used her passion for sustainable shopping and experience in art to create a small boutique thrift shop downtown.

Mary Yoder-Anderson used her passion for sustainable shopping and experience in art to create a small boutique thrift shop downtown.

On a particularly warm fall morning, Dart Resale & Trade owner Mary Yoder-Anderson — donned in overalls and a white T-shirt — stands at the counter, lacing up a trendy pair of white sneakers. She points to the half-painted forest green accent wall to her left. A month after the store’s Oct. 1 grand opening, there’s still final touches to be made.

“I think a mural is going on here eventually,” Yoder-Anderson said.

Yoder-Anderson has always had an eye for art. Earning an art and design degree from Eastern Mennonite University, she worked as a graphic designer, then an art teacher for nine years at the Shenandoah Valley Governor’s School in Fishersville, Virginia, and Keister Elementary in Harrisonburg.

This background inspired her passion for collecting vintage and modern clothing, a creative hobby she could pursue outside of the classroom.

“I explored the idea of opening a secondhand shop because I felt like we needed something like that downtown,” Yoder-Anderson said. “I’m from Oregon originally, and the area I’m from has a lot of buy, sell, trade shops … and so I thought one would do well in Harrisonburg.”

Yoder-Anderson’s business venture began in 2019 as the “Dart Cart,” a pop-up shop at downtown Harrisonburg events. The name pays homage to a key identifier of vintage garments: darts, or folds sewn into tops to provide shape in the chest area.

“I was trying to think of a short, four-letter name, and I liked the idea of the word ‘art’ being in it because I come from a fine arts background,” Yoder-Anderson said. “And I thought Dart just worked perfectly.”

Yoder-Anderson said the Dart Cart was well-received in the Harrisonburg community, but her goal was always to open a storefront.

She’d planned to make that dream a reality when she gave her resignation notice at her school last fall, but plans were stalled when COVID-19 hit in the spring. Despite the setback, Yoder-Anderson said she felt prepared to own a business and committed once the perfect space became available last August.

“As soon as I knew this was an option, I thought, ‘OK, we’re just going to go for it because it’s nice and small,’” Yoder-Anderson said. “It didn’t feel like a huge risk because the size of the space, you know, is really just perfect for us.”

Dart Resale & Trade now resides in a quaint, garage-style space in downtown Harrisonburg, nestled between a mortgage firm and Rocktown Kitchen. Despite the pandemic, Yoder-Anderson said business is booming.

She likes to open the garage door on warm days to maximize airflow — which also serves as a countermeasure against COVID-19 — since the shop’s maximum capacity is seven people inside the 520-square-foot space, including employees.

“On weekends, sometimes we have a line outside, but everyone’s respectful of that because they value a safe shopping experience,” Yoder-Anderson said. “And I think people appreciate the affordable price point, especially because times now are hard.”

Dart carries a variety of affordable vintage and modern secondhand garments, catering to men’s and women’s fashion. The store has resale and trade options — hence its name — offering sellers 30% of a garment’s determined price point in cash or 50% in store credit.

Senior studio art major Hannah Moulen was Yoder-Anderson’s practicum student at Keister and was recruited as one of the store’s first employees. She said the majority of the clothes they look for are casual staple pieces from brands not usually found in Harrisonburg, such as Levi’s, Madewell and L.L.Bean.

“We’re trying to appeal to students and just the younger crowd in Harrisonburg, and a lot of people aren’t looking for formal wear or business attire,” Moulen said. “Here and there, we’ll get some wacky shirts or something that’s velvety and textured, but those are just occasional, fun pieces.”

For Yoder-Anderson, it’s important to involve the Harrisonburg community in the resale process. Her goal is to give the community a sustainable place to shop where customers can exchange unworn pieces in their wardrobe for practical, everyday basics.

“I think we have a lot of sustainable shoppers in our community and people that want to shop locally,” Yoder-Anderson said. “They try to buy secondhand as often as possible and recycle things, so I think people are excited to be a part of that.”

Senior studio art major Caley Keenan was Yoder-Anderson’s student at the Governor’s School and recently started working at Dart. She said she loves working there because of its fun, relaxed atmosphere and close-knit staff.

“It doesn’t feel like work whatsoever,” Keenan said. “I think we have a great team.”

Looking to the future, Yoder-Anderson said she doesn’t expect to expand any time soon. Though the space is snug, she said that’s exactly why she chose it.

“I really love this little spot,” Yoder-Anderson said. “I worry with a bigger space or chain stores, it’d be harder to keep up with, and this is perfect for balancing business life and my own personal family life.”

Since Dart’s grand opening, Yoder-Anderson said the most fulfilling part is seeing customers enjoy the space she’s created and watching them add their personal touches to the inventory.

“I really love that this space was just kind of invented by me and created by me,” Yoder-Anderson said. “But now that we’re accepting trade, people are bringing in beautiful items, and they’re contributing to this space as well. And that feels good.”

Though Plato's Closet is a chain store, it's also a gem for college students to find second-hand, trendy outfits for a low cost. Here are some thrifting tips for taking a trip there.

Seven tips for the next trip to the thrift shop

Thrift shopping saves the environment and one's bank account. Here are seven tips for a quick trip to thrift, whether one’s looking for clothing, furniture or even appliances.

Thrift shopping is both a money-saving and ethical way to shop for clothes. The writer argues for it to become a norm.