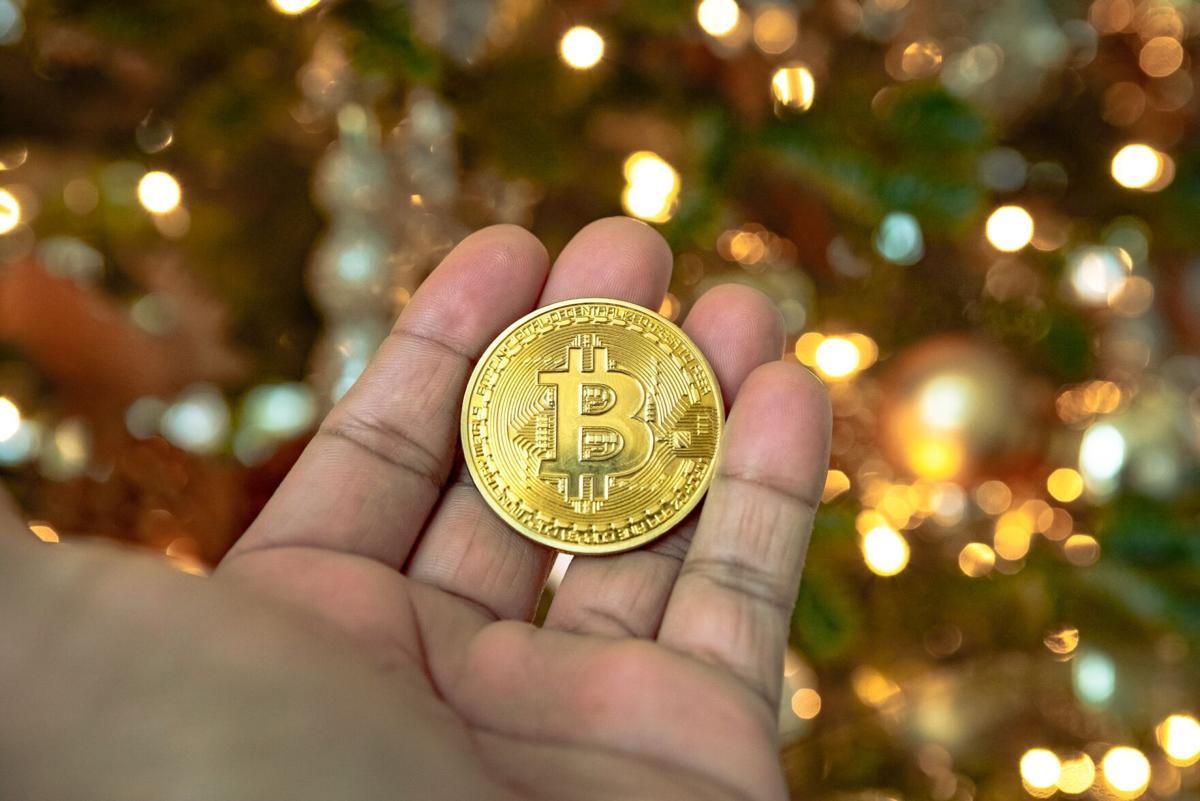 Searching for a last-minute stocking stuffer? Consider Bitcoin, though it may raise an eyebrow or two.

Current and prospective Bitcoin owners must ask: Is the surge sustainable?

About three years ago, Bitcoin boomed and then quickly busted in a classic blowoff top pattern — a sudden price surge mirrored by a similarly rapid move to the downside. That gained the cryptocurrency worldwide attention and soon infamy, losing the trust in millions as it plummeted from a peak of $19,783 on Dec. 22, 2017, to a low of about $3,252.

Is Bitcoin a fad and worth less than coal, or is it digital gold? Read what’s behind the resurgence and decide.

What is Bitcoin, and why is it promising?

Bitcoin is a cryptocurrency — an encrypted digital asset unregulated by a central bank or government that promises lightning-fast, frictionless transactions around the world.

Optimists believe cryptocurrencies are the future of global payments, given the current headaches in transferring money globally. Sending money across borders takes time and money due to transaction charges and fees incurred when exchanging between currencies. With Bitcoin, money can be sent instantly, securely and free of charge.

Bitcoin is real, even though it isn’t tangible. It can be used in transactions, just like U.S. dollars, euros, gold and silver, though there are several notable differences between cryptocurrencies, traditional currencies and commodities.

Is Bitcoin worth anything?

Traditional currencies are only as valuable as peoples’ faith in the government that issues them. When the Roman Empire fell, the denarius went from a day’s worth of wages for a skilled worker to nearly worthless. If the U.S. government suffers the same fate as the Romans or Trojans one day, U.S. dollars will be worth little more than the paper it’s printed on.

In the past, currencies’ value was backed by gold — most notably the U.S. dollar under the Bretton Woods system from 1944 to the early 1970s. Now, major world currencies are considered to be fiat money, meaning they’re backed by faith instead of physical currencies.

The U.S. dollar is considered the world’s reserve currency because of the strength of the U.S. economy and faith in the American government. Even the financial crisis of 2007-09, spurred by a near collapse of U.S. banks, sent the dollar surging as investors demanded the safety of U.S. Treasury notes — defying expectations and making a collapse of the U.S. dollar highly unlikely.

Central banks around the world, including the Fed, quickly purchased financial assets during the pandemic to increase the money supply and prevent a slowdown in spending and investment. Some fear the moves are overdone and believe the flood of money will dilute currencies’ value.

By contrast, commodities are issued by Mother Earth, not a central authority, and therefore exist in limited supply. There’s only so much gold, silver or copper in the world, which can be mined or found but not cost-effectively created. Similarly, Bitcoin isn’t controlled by a central authority and has its supply capped at 21 million, which has led some to suggest it’s a “digital gold.”

But contrary to popular belief, rarity in itself doesn’t necessarily translate to value, a point illustrated by simple logical thinking. If a three-year-old scribbles with crayons on paper, there technically is no identical piece of paper to it on the planet. Clearly, that doesn’t make it valuable, as that amateur, one-of-a-kind artwork is worth nothing to a business as a payment.

That begs the question: What makes commodities valuable, if not rarity?

Simply put, as is the case with stocks, autographed baseball cards or products sold in stores, commodities are worth whatever people, which make up the market, think they’re worth and are willing to pay for them. A pound of gold is far more valuable than a pound of bread, but a starving man on the verge of death would gladly swap the metal for sustenance.

What, then, translates to value, defined by what the masses are willing to pay to acquire? Economists and philosophers have proposed several ideas over the years.

Though debunked by many, including the Madison Business Review, Karl Marx’s Labor Theory of Value argues that products or services should be worth how much time and effort goes into them. That argument falls apart when considering that work isn’t equally valuable, as 10 hours of making mud pies in one’s yard can’t be equated with 10 hours of teaching or waiting tables.

'I worked hard. I deserve a good grade!': Debunking the myth

After viewing final grades this semester, upset students should look to the mirror, not their professors, for answers. Here's why.

Utility, or usefulness, is a strong argument for inherent value in many cases. Gold, silver and copper conduct electricity and have numerous industrial and technological uses, meaning that if society collapsed and paper currencies were worthless, those commodities would still hold value. Since Bitcoin is virtual, it clearly has no utility other than use for digital payments, just like dollars, euros, pesos or yuan.

If Bitcoin has value, where should its price be?

In summary, Bitcoin is a currency used for transactions like traditional fiat currencies, though it’s not centrally issued and is inherently rare because of its capped supply. It’s like commodities in that way, though it isn’t tangible and doesn’t have intrinsic utility.

That’s why valuing Bitcoin is next to impossible.

Bitcoin appears to have promise because of its popularity and potential to change payments, and it’s increasingly gaining respect and trust from individuals and institutions. But at the end of the day, like stocks, bonds or any other asset, it’s only worth what people will pay for it.

Cryptocurrencies have no shortage of skeptics, including billionaire Mark Cuban, who famously said he’d “rather have bananas than bitcoin,” given that the fruit has intrinsic value as food. But Cuban, owner of the NBA’s Dallas Mavericks, may be softening his stance and looking to seize on the sudden surge in Bitcoin’s price and popularity.

The Mavericks have accepted cryptocurrency as payment for game tickets and merchandise for the past year and a half, and Cuban this week announced a promotion apparently designed to accrue Bitcoin, offering $25 gift cards to those who buy $150 worth of merchandise with Bitcoin.

Want to spend your $BTC somewhere... Spend it with the Mavs and get a 25 percent discount for using Bitcoin !https://t.co/De7Y5f28s8

Famed investor Warren Buffett, whose financial stake in banks that could be harmed by the rise of cryptocurrencies should be noted, is a vocal Bitcoin basher. Unlike Cuban, Buffett made it clear that he’ll never own Bitcoin.

“Cryptocurrencies basically have no value,” Buffett said to CNBC in February 2020. “They don't produce anything. … You can't do anything with it except sell it to somebody else. But then that person's got the problem.”

Buffett has a point in noting that Bitcoin doesn’t produce anything, as stocks, which represent ownership in companies, entitle owners to shares of profits and dividends, in some cases.

But fiat currencies don’t produce anything either, and while they’re supported by governments, they are ultimately backed by faith in those countries and not commodities. Anyone is welcome to spend their life detached from society, refusing to use U.S. dollars that are “inherently worthless” and insisting a collapse is imminent, but that’s not an attractive lifestyle for most.

Where Bitcoin should be priced is anyone’s guess. As the Madison Business Review noted earlier this month, “price targets vary widely, from $50,000, to $6 million, to $0.”

Is Bitcoin worth the risk?

Buying Bitcoin is risky, as hour-to-hour and day-to-day trading are mostly driven by technical forces. Cryptocurrency collapses can happen overnight, as the world learned in 2018, so caution is encouraged, as is further research.

But Bitcoin’s price is steadily rising, as is enthusiasm, as people realize its potential to transform global transactions and while central banks around the world flood markets with currency.

Major payment processors are embracing cryptocurrency, as Square bought $50 million Bitcoin while PayPal moved to allow transactions with cryptocurrency, which will make access easier and further move Bitcoin into the mainstream. Commission-free purchases on brokerages like Robinhood also may fuel interest in Bitcoin.

Meanwhile, investment banks like Jefferies are reducing exposure to gold and buying Bitcoin, while publicly-traded business intelligence firm MicroStrategy has been converting cash to Bitcoin, and if more companies follow, the momentum will likely further compound.

“The acquisition of additional bitcoins announced today reaffirms our belief that Bitcoin, as the world’s most widely-adopted cryptocurrency, is a dependable store of value,” MicroStrategy CEO Michael Saylor said in a statement.

Is Bitcoin a dependable store of value? That’s the $428 billion question, given that that’s what Bitcoin’s market capitalization is, as of Dec. 23.

Momentum is undeniably growing with cryptocurrency, especially Bitcoin, which has doubled since the summer. Where it will be next summer — or next Christmas — is anyone’s guess. Santa is unlikely to put Bitcoin in many stockings this year, but it’s possible that many will wish he did.

Disclaimer: I own 0.01978 Bitcoin. I wrote this article myself, and it expresses my own opinions. I’m not receiving compensation for it, and I have no business relationship with any company whose stock is mentioned in this article.

Apple may be planning to enter the auto industry, while Bitcoin is rising with the broader stock market as the vaccine rollout continues. The Madison Business Review's Bryce Roth breaks down this week in markets.