Ticker Tape by TradingView
1 of 2 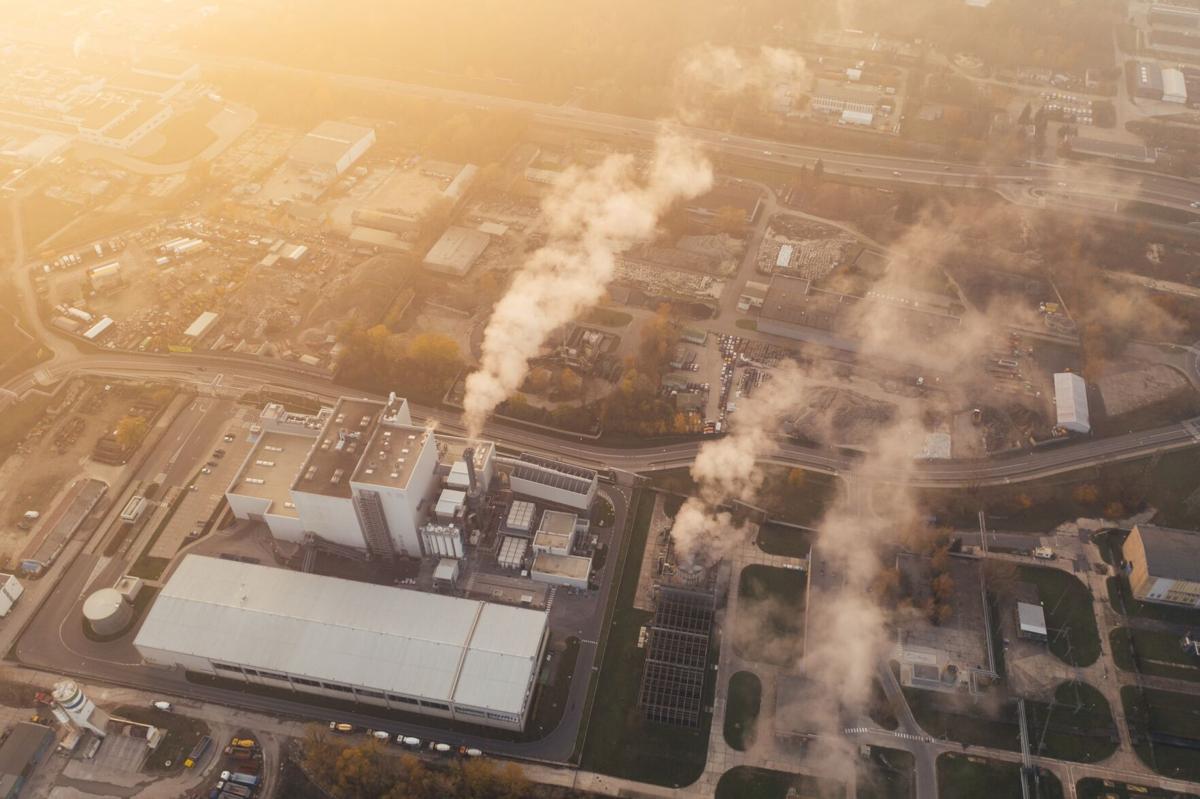 With renewable energy becoming cheaper and cheaper, it seems like the world might soon be carbon neutral. Until then, policies like the European Union’s must be put in place. 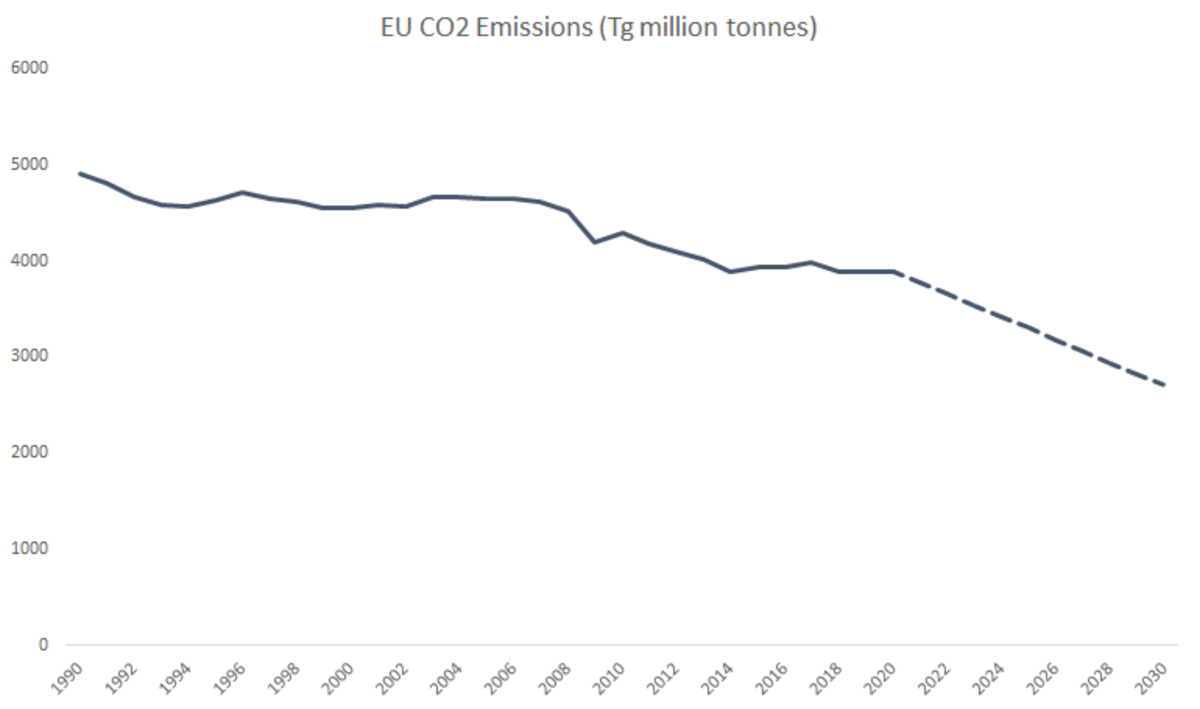 This graph shows carbon dioxide emissions in the European Union since 1990, according to European Environment Agency data.

A new year is a time for resolutions. As the world moves closer to what some scientists call “a tipping point” for the planet, it’s fitting to examine policies aiming to correct the negative externality of climate change, caused in large part by carbon pollution.

Carbon pollution is a negative externality — a harmful unintended side-effect of using fossil fuel for power. Climate change is shown through global warming, rising sea levels and decreased air quality. It will affect every single person on Earth negatively and in a meaningful way.

The European Union is no stranger to ambitious policies that target carbon pollution, and the economic bloc has emerged as a global leader in setting climate policy.

The EU’s current plan positions Europe to be “the world’s first climate-neutral continent” by 2050, and along the way, it plans to cut emissions by more than half by 2030.

These goals and the progress they’ve already made is shown in the following graph. The blue line represents the carbon dioxide being emitted into the atmosphere (in Tg millions of tons). The dotted lines represent the EU’s goals on limiting carbon emissions over the years.

Although much work has already been done toward preserving the planet, it seems like the last mile may be the hardest. All factories, cars, trains and machinery will be converted to either be efficient enough to be in line with the EU’s goals or rely on renewable energy — if it hasn’t been done already.

Companies, not the government, lead the climate change fight

No matter who wins the 2020 election, it appears big businesses will continue to lead the battle against climate change. Here's why and how.

This is easy when the numbers make sense for companies and people to switch over, but it can be a tough sell if government incentives to correct the negative externality of pollution aren’t a strong enough incentive to change behavior.

For example, imagine that someone is able to buy an electric vehicle from Tesla, but their current car works and runs on gasoline. Because there’s no need to upgrade, that person is happy to keep their gas-powered car and save the $35,000 cost to buy the new Tesla.

However, if the individual with the carbon-dioxide polluting car lives in a country that taxes each gallon of gas, and it would cost $40,000 in carbon expenses over the life of the car to operate it, it would then make sense to buy an electric car in order to not have to pay the carbon expense, ignoring all other car maintenance factors. But if carbon expenses were only $10,000, it may not still make sense to get that new Tesla instead of keeping one’s gas-powered car.

Apple announced it's going carbon-neutral by 2030 after pressure from environmentally conscious investors. But it's possible for companies to be carbon-neutral while increasing their carbon footprint and emissions. What will the impact on the Earth and other companies be from this move?

Many factors would play into this car owner’s decision, like the current car’s resale value and the difficulty of paying the carbon expense. If it’s less costly to keep the car for now, that’s  troubling because it means the laws imposed to try and correct the negative externality of carbon pollution could still be too cheap to cause the necessary change.

Correcting climate change and carbon emissions can’t happen overnight. The EU recognizes this and allows companies to pollute up to a certain amount while the transition to clean energy occurs, though companies can’t pollute over a set amount without the use of carbon credits.

Carbon credits are what allow companies to pollute CO2 under cap and trade programs.

The EU employs a system somewhat similar to the U.S. cap and trade system for emissions but with an interesting twist: open market trading.

Carbon futures are traded daily on the Intercontinental Exchange (ICE), where one future represents the right to pollute one ton of carbon dioxide. Companies then settle up with the EU at the end of the year. The price of futures relies on the economic outlook, production levels and — to a certain degree — investor sentiment.

Why the greatest companies focus on purpose, not profits

Because of the speculative aspect of investing, carbon futures can outperform the market. The March 2021 carbon future has increased close to 50% since the beginning of 2019, and from the lows of March 2020, the contract has more than doubled. The only catch is that the market seems to be pretty thin in terms of the daily trading volume, meaning that compared to a popular stock like Apple, these contracts are traded less than a fraction of a percentage as much as Apple shares.

An interesting note is in the differences in prices on futures that are years apart. Take the December 2021, 2022 and 2023 contracts, priced at $34.86, $35.00 and $35.16, respectively. The European Union is planning on going carbon neutral by 2050, and as shown in the graph earlier it will take a good amount of cutting carbon credits. This begs the question of if a year is accurately priced.

From the graph above, it’s clear the carbon output needs to decrease by more than 2.5% a year for the EU to reach its goals. This means that the carbon credit supply will decrease in line with that estimate every year, but what will happen to demand?

The demand for these carbon credits are determined by economic output and efficiency of power plants and factories in the EU. Additionally, if the price of these credits increases too high, then companies might move their production facilities abroad to more accommodating countries, which would hurt the EU economically and still result in pollution.

This could signify that the market expects a hard-fought push toward carbon neutrality in the EU.

Does carbon trading lead to market efficiency or failure?

The most intriguing aspect of this open market trading mechanism is the role of the speculator.

Although a single contract bundle will cost upwards of $30,000, it seems that anyone can buy a contract and drive the price up. The speculator, similar to a gambler, is in a uniquely strong position trading carbon futures because if at the end of the year a company does not have enough credits to cover the carbon it polluted, the business will face huge fines from the EU.

In theory, an individual holder of a single contract can sell that contract to a company one ton over what they have credits for as much as they want, up to the fine that the company would pay the EU. This means that in a perfect world, companies that pollute up to the limit of carbon credits in the market without first buying the contracts could pay big sums to a speculator trying to corner the market in order to avoid big fines by the regulators.

Another potential market failure is companies moving counties to cut down on carbon expenses and potentially labor costs. Although this is a real possibility, it seems like the companies would have moved already because this policy has been in effect for almost 16 years.

Additionally, the push for corporations to be friendly to environmental, social and governance (ESG) principles has been persuasive in the past couple of years.

Responsible companies are outperforming amid COVID-19. Why?

In recent years, many investors started targeting companies that treat workers and the environment well. Here's why the economic downturn is accelerating that trend.

Green-conscious investors are starting to demand that corporations treat the planet and workers responsibly, which has fueled a surge of new money into stocks of companies that care for workers and society. Cutting the marginal cost of carbon credits by transitioning to green energy would also allow companies to be included in the giant ESG funds that have been surging in popularity and deposits.

Protect your savings, the environment through ESG investing

Even if a company finds it in its best interests to still move operations outside the EU, it’ll only be delaying the shift to renewable energy.

Developing nations are pushing toward carbon neutrality, as China — long a leader in pollution — plans to be carbon neutral by 2060. All in all, with the Levelized Cost of Energy (LOCE) for solar energy at an all-time low and only decreasing as time goes on, it makes sense for companies to take the cards that the EU dealt and maybe even reap the benefits of being added to an ESG index fund.

Counting the cost of carbon credits

Everyone should bear the burden of protecting planet Earth, but is the price of carbon high enough to accurately correct for this externality? The answer is unclear, though economists have studied the question extensively.

The base case for the price of carbon in 2019 was $50 under U.S. President Barack Obama, whereas the EU priced it around $35. The jury is still out on if this price corrects the negative externality, but if the EU does get to carbon neutrality, then the carbon credit prices must have been close enough.

Can carbon-free flight take off if airlines just chase cash?

Consumers have held corporations accountable on environmental issues in recent years, but airlines are lagging behind. Can the industry, shaken to its core by COVID-19, make positive moves toward sustainability with carbon-free flight?

The EU’s open market cap and trade policy is a great step in the right direction, as the bloc has accomplished its 2020 goal and is on its way to being carbon neutral by 2050. This mechanism is helping to stop climate change, but the EU is just one entity, so the rest of the world will have to pitch in.

With renewable energy becoming cheaper and cheaper, it seems like the world might soon be carbon neutral. Until then, policies like the EU’s must be put in place.

Disclaimer: I/we have no positions in any stocks mentioned and no plans to initiate any positions within the next 72 hours. Madison Business Review editor James Faris is a long-term investor in Tesla. I wrote this article myself, and it expresses my own opinions. I’m not receiving compensation for it, and I have no business relationship with any company whose stock is mentioned in this article.